Up to 10 towers over 50 years for Brentwood Mall

The Brentwood Mall Redevelopment (BMR) is beginning to garner increasing attention early into 2012.  The following story in the Burnaby NewsLeader has brought out some more details of what we can expect for the BMR.  The Entertainment Plaza was discussed in the interview and it seems that a gathering place to watch high-profile sporting events such as Canucks playoff games is envisioned.  It was also mentioned that as many as 10 towers will eventually rise on the site over the long term. 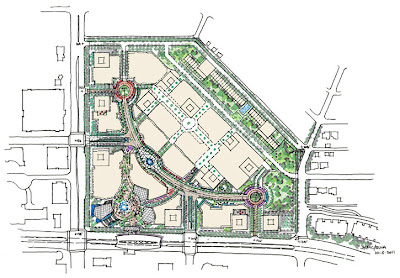 This artist’s rendering shows a concept layout of the Brentwood Town Centre property, where future buildings may be located (in light brown) as well as better integration between the mall and the existing Brentwood SkyTrain station at lower left.


North Burnaby could soon have a community gathering place as part of the proposed redevelopment of Brentwood Town Centre.
The concept plans by the mall's owner, Shape Properties Corp., includes a proposal for an entertainment plaza at the corner of Lougheed Highway and Willingdon Avenue, which would serve as a focal point for the site.
Darren Kwiatkowski, executive vice-president of Shape Properties, which purchased the mall property in 2010, said the plaza would be large enough to host events such as Christmas celebrations with a big tree, Canucks playoff games on a big-screen TV and street buskers on weekends.
It's just one aspect of a massive makeover being planned for the 28-acre mall site.
Interest is certainly strong, judging by the turnout of about 300 people at a recent open house on the project.
Kwiatkowski credited Burnaby city hall's consistent planning policy for ensuring there are "no surprises, people know this is planned for mixed-use, higher density, town centre, SkyTrain."
There were some concerns raised, he noted, largely about the potential for increased traffic shortcutting through area neighbourhoods.
Kwiatkowski suggested that most people driving to the mall currently use Lougheed or Willingdon to get there and that existing traffic issues are related to recent housing developments east of the mall.
In any case, the company is not proposing any new access points on nearby streets that don't currently have them already and will keep the concerns in mind during its planning process.
Master plan in the works
A master plan is currently being developed for the site. Once that receives approval from Burnaby city council, the focus will shift onto rezoning processes for each phase of the project.
Kwiatkowski noted that the company is taking a longterm view of the property of up to 50 years. Over that time, it expects to build six to 10 towers of varying heights on the site.
"It sounds like a lot but it's not when you consider the site is 28 acres," he said, noting the footprint of an average tower is about 8,000 square feet.
The first towers, about six in total, would be focused on the Lougheed and Willingdon frontages, with the highest densities closest to Brentwood SkyTrain station. Heights and densities would decrease the closer they get to the adjacent single-family neighbourhood to the north.
Parking would be moved underground and the site transformed with streetscapes, landscaping and streetfront retail.
Kwiatkowski said the company is considering potentially locating towers, either office or residential, over top of the existing mall buildings in the future.
He stressed that such a move would not involve shutting down and rebuilding the mall. If they went ahead, it would likely involve closing off and installing hoarding around one section of the mall at a time to allow for construction of the towers.
Outside, public open spaces would be built, with the main one at Lougheed and Willingdon. That corner would be the focal point for an entertainment component of the site, which would include restaurants, outdoor-oriented retail and possibly movie theatres.
He described it as a "very vibrant and cool urban space" within a multi-level structure.
That corner would also see improved integration with the SkyTrain station. The bus loop would be moved onto Lougheed and Willingdon and SkyTrain passengers would be able to walk off the station platform and straight into the entertainment plaza.
"If the train stops at Brentwood you'll want to get off because it's right there," Kwiatkowski said.
Brentwood 'a natural' for development
Burnaby Mayor Derek Corrigan noted that focusing density around SkyTrain stations is part of the compromise city hall made to protect single-family neighbourhoods in the city.
Brentwood is served by three SkyTrain stations so it's "a natural" for redevelopment, Corrigan said, noting that redevelopment of the mall site is likely in response to the success of other such projects nearby.
"I think that this is going to create a really interesting urban centre and something that's going to ultimately increase the value of properties around it. We'll have to go through that process to see what the public is concerned about."
Kwiatkowski said the next public open house on the project will take place sometime in March at the earliest. If everything goes as planned, construction could start next year.
wchow@burnabynewsleader.com
Posted by Brentwood Station at 5:44 PM