For the first time, I attended a public hearing at Burnaby City Hall on Nov 23rd . It was uneventful as nobody spoke to the issue that interested me the most, which is the plan to amend the wording of the density bonus policy allowing for increased density and taller buildings in Burnaby's town centres. With nobody expressing their opposition to the proposal, it seems that town centers such as Brentwood will see increased building heights and densities for new developments. Increasing density and building higher up in town centers is a good idea from an environmental perspective as it allows for larger numbers of people to live and work in a concentrated area rather than in an outwardly expanding direction that increasingly encroaches into the surrounding natural environment and agricultural land as has been the case for the past 30 years with development in Metro Vancouver.
With the idea of having more people concentrated in and around town centres becoming increasingly accepted, the issue of park space and related recreational amenities serving an increasing population becomes obvious. Brentwood Town Centre has seen a dramatic increase in its residential population during the past 10 years. Local recreational amenities such as the Eileen Daily and Willingdon Heights Community centres, Kensington and Burnaby Lake arenas and local outdoor parks such as Confederation Park have served the area extremely well. With the exception of the Willingdon Heights Community Centre, all of the places mentioned are located well outside of the Brentwood area and require travel by car to reach such amenities.
With more residential and commercial development planned for the area, the building of park space evenly interspersed throughout the Brentwood area will be much needed in the future, if it isn't already needed.
Close proximity of a home to parks is one of the important features that attracts potential home-buyers to any neighbourhood. If designed well, park and recreational space can be efficiently placed throughout the Brentwood area to cater to a variety of needs.
The most basic park space is one that includes a children's play area. Such parks should exist within a 10 minute walk of every residence in the Brentwood Town Centre area. The ability to walk children to a park instead of driving them there is important in creating a pedestrian culture (at least within the neighbourhood) Other amenities such as basketball, ball/roller hockey space can be incorporated into a park setting to encourage locals to play a variety of sports. Parks that include large trees to create an oasis effect is important to making a park appealing to potential users (merely planting an open grass field does not qualify as creating park space).
Posted by Brentwood Station at 9:16 PM No comments:

Pedestrian issues shouldn't be an afterthought

In my previous post, I mentioned the need for sidewalks and the reasons why many streets still don't have them in the year 2010. Just like cycling infrastructure that is currently being "forced" upon us (it's not a bad thing) after decades of automobile-centered growth in our cities, sidewalks seem to have been built as an afterthought, or without any consideration for good design and purpose. The result for pedestrians is a lack of safety due to uncontrolled automobile traffic, lack of safety due to poor lighting, lack of convenience due to poor connectivity from "point A to point B" and, among other things but perhaps most importantly, a lack of pedestrians.
This is why a pedestrian advocacy group is needed to brainstorm ideas, attend City Council meetings and public hearings, and to communicate pedestrian concerns to both the City and to the public in the form of letters to local newspapers such as the Burnaby Now and the NewsLeader.
Good sidewalk infrastructure is the foundation for building vibrant neighbourhoods where locals and visitors alike feel safe walking to school, work or the local store. I have already written about the elements of appealing sidewalks and how they would improve neighbourhoods and encourage walking. I know there are many people that have thought about the same issues that I have and certainly other issues that I yet haven't when it comes to pedestrian concerns. If anybody reading this shares the same view as I do and is interested in creating and/or joining a pedestrian advocacy group for Burnaby, please comment on this blog or contact me at brentwoodstation@ymail.com.
Posted by Brentwood Station at 11:43 AM No comments:

There are many streets in Burnaby, some right here in the Brentwood area, that have no sidewalks in place to provide a safe place for pedestrians to walk along. One such street is Graveley St between Willingdon and Carleton Aves. Although new developments require the builder to provide sidewalks along the roads that they build on, many neighbourhoods that preceded current by-laws making sidewalks mandatory have been left without a place for people to walk (other than on the road).

The sidewalk on Whitsell Ave physically ends at Graveley Ave. A view of Graveley in either direction, shows an incomplete and inadequate sidewalk.

On the surface, the The City of Burnaby's Local Area Service Program seems to be a progressive, sidewalk-friendly program to improve neighbourhoods. However, when one looks at the steps required to have a sidewalk installed in a neighbourhood that already doesn't have one, it becomes evident that the program is an excuse not to build sidewalks.

On it's website, the City describes the program as a way for homeowners to improve their street and consequently "enhance" their properties. By wording it in such a way, The City is making it sound as if the sidewalk is of benefit only to the people living on the street and not to anyone else. It is a fact that sidewalks are a benefit to anyone that needs to get from one place to another by walking. Furthermore, it is not an issue of enhancement, but of safety. It is ridiculous that a parent must push a baby stroller along Graveley, on the road in between parked cars to avoid moving vehicles. In my opinion, it is the responsibility of both the City and property owners to have sidewalks built. A sidewalk is not private property over which homeowners have reign and is therefore the responsibility of the city and the public. That is what being a part of the community is all about.

Under the current program, residents of a street must canvas the neighbours on their block and obtain a minimum number of signatures supporting the building of a sidewalk. This is a major hindrance to sidewalk construction because many people will not support the idea if they are required to pay for its construction. In my opinion, the building of sidewalks in residential areas (where they already don't exist) must be mandatory, and the expense burdened by both the City and the residents of the street.

If funding is the issue, the City must get creative to raise funds. For example, if a company such as the Bank of Montreal funds the construction of 3 blocks of sidewalk in exchange for the right to advertise its brand and products on posts situated at intervals along its length, it might be a good option if done right. The only option that homeowners should have is on how to fund the sidewalk and not whether or not they want a sidewalk in front of their home.

In my opinion, the Brentwood area, if not all of Burnaby, needs a pedestrian advocacy group. I'm not talking about pedestrian activism, but about an organization that brings about awareness of important pedestrian issues that the City must consider if it wants to create complete neighbourhoods. Ultimately, sidewalks enhance not only the properties along which they are built, but the overall neighbourhood and city. I've already written about what elements could make sidewalks more appealing (Appealing Sidewalks). In the case of Graveley St, it would be nice just to have a sidewalk.
Posted by Brentwood Station at 9:35 AM 3 comments:

Whereas at one time the only place I could buy organic produce was at the Save-On-Foods at Madison and Lougheed, recently I've noticed that Kin' s Farm Market at Brentwood Mall has begun to add organic choices on its shelves. Although not having as much variety of organics as Save-On-Foods, the little produce store is beginning to get more of my shopping attention because it seems to have more "BC" or Canadian produce options than its larger competitor. If Kin's continues to add to its "organic" and "local"selection, I'll be happy to do more of my produce shopping there.
Posted by Brentwood Station at 1:44 PM No comments: 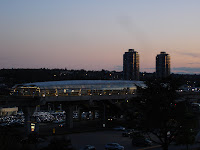 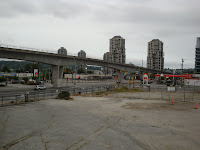 The lot located just west of the station (right photo), formerly the site of Brentwood Brake and Muffler and a gas station, will most likely be part of a community amenity space and has been described as potentially being used as a public "celebration square" or "gathering place". Several other projects that have been on hold in the Brentwood area may be awaiting zoning change approvals to take advantage of the increased height and density allowances.
The benefit to the city in return for allowing more density is in the form of cash paid by the developer for a fund geared towards the building of public amenities and social housing or in the form of a public space or facility being built into the project by the developer at no cost to the city.
Since I will not be working during the evening of November 23, I will experience attending a public hearing for the first time in my life. It should be interesting and informative to hear varying viewpoints along with potential ideas associated with the proposal.
You can read more about this topic in the following Burnaby Newsleader article.
Posted by Brentwood Station at 10:18 AM 2 comments: