As I walked towards the lottery stand after entering the mall today, to my pleasant surprise, I noticed an un-leased space with a sign indicating that a Tim Hortons is coming soon.  All I can say is, NICE. 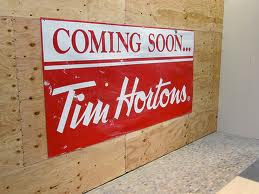 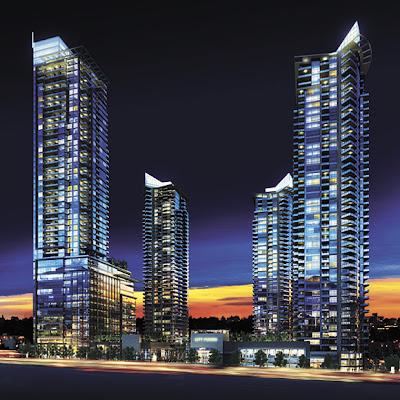 Neighbourhoods with abbreviated names have been popular ever since New Yorkers copied London’s swingin’ Soho district with their very own SoHo – short for “South of Houston” in the mid-1980s. Now, this hip neighbourhood-naming trend is reaching into Burnaby, where Jim Bosa’s Appia Developments will soon be pre-selling SOLO District – “South of Lougheed.”
Over the past 15 years, coordinated planning between the City of Burnaby and the Appia/Embassy/BOSA Developments family has created Brentwood – the centre of vibrant urban life that is anchored by a major SkyTrain station on BC Transit’s Millennium line. SOLO District is the next logical stage in this community planning process – a self-contained, clean, green neighbourhood where everything you could possibly want is within a short walk or bike ride. This four-phase mixed commercial and residential development will eventually feature four gleaming towers with 1,400 new homes. As Burnaby’s Most Livable Urban Community, SOLO District will truly put Brentwood on the radar as a shopping, dining, and professional services centre.
Located on the southwest corner of Lougheed Highway and Willingdon, SOLO District is in line with the City of Burnaby’s vision to urbanize North Burnaby. SOLO District will make Brentwood one of the fastest growing communities in the next 10 years, making it an excellent investment opportunity. George Wong of Magnum Projects says: “There is excitement and value in high-speed growth. With a combination of City-mandated change and mass market receptivity, SOLO District will propel population growth and home values will appreciate.”
Burnaby residents have been very receptive to this project and are anticipating SOLO District’s arrival. There is a wide appeal to local residents, from young buyers to empty nesters. This will also draw buyers from all over Metro Vancouver, including downtown, East Vancouver, as well as other parts of Burnaby.
SOLO District is in the middle of it all, whether by transit or by car. The Brentwood Town Centre Station of the Millennium Line is steps away, connecting to downtown Vancouver within 20 minutes. By car, Lougheed Highway and Highway 1 are instantly accessible. North Burnaby is already a local entertainment destination – with Joey Burnaby, Brown’s Social House, Cactus Club, all within a two-block radius.
At SOLO District, there is a home for everyone, from first-time homeowners through to the downsizer and everybody in between. Even the most budget-conscious buyer is able to get in, with luxurious and spacious suites catering to those who want to pursue their dream home. Pre-sales for the first tower will launch spring 2012, with close to 400 homes to be released and anchored by a major food store. Residences in this stunning 45-storey tower will boast panoramic views of the North Shore mountains, Mount Baker and downtown Vancouver.
SOLO District’s energy-efficient, sleek glass buildings will cater to the changing demographics of North Burnaby – younger, highly educated urban professionals who perhaps work in downtown Vancouver and who value an uncrowded yet vibrant neighbourhood with an urban ambience.
SOLO At A Glance
Show Homes: Opening spring 2012, one block South of Lougheed on Willingdon
Total Number of Units: 350-plus (Phase 1 only)
Square Footage: From 480 to 1,700-plus square feet
Website: www.solodistrict.com
Posted by Brentwood Station at 10:01 AM 2 comments:

Several days ago it was announced that Sears will close its Pacific Centre store in downtown Vancouver to focus on refreshing other stores.  This may come as no coincidence considering the plans to redevelop Brentwood Mall as Sears may be looking to strengthen its position here as the redevelopment begins.
Sears is closing its flagship Pacific Centre store in downtown Vancouver this year


Sears is closing its flagship Pacific Centre store in downtown Vancouver, along with locations in Calgary and Ottawa.


Sears Canada is selling back the leases to the landlord, Cadillac Fairview, for $170 million. The doors will close at all three locations by October 31st.


Other Sears stores around Metro Vancouver are not affected.


In a statement, Sears says it had not planned to close the stores, but “the transaction for these three specific locations provides an attractive financial benefit for the company,” which will allow the retailer to drive growth in other areas and refresh other stores.
The closures come as Sears works to revamp its struggling Canadian operations. Last month, the company announced plans to cut about 400 jobs across the country as it closes in-store cafes. About 70 employees were laid off in Sears Canada’s head office last year.
Sears Canada shares jumped nearly five per cent on the Toronto stock market after the announcement.
Source: Canadian Press
Sears is closing its flagship Pacific Centre store in downtown Vancouver this year
Posted by Brentwood Station at 7:58 AM No comments: