Shape Properties sees the closure of Sears as clearing the way and providing more options for the redevelopment of the northeast quadrant of the Brentwood redevelopment.

Speaking of opportunities, whereas Sears is permanently closing down during Brentwood's transformation, it is rumoured that the tiny Coles bookstore in Brentwood will be opening a large format Chapters/Indigo style store in the Amazing Brentwood retail area currently under construction. 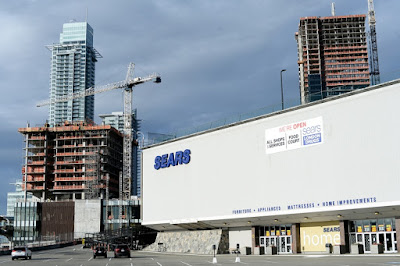 There could be a silver lining to the impending closure of Sears Canada – at least for the people behind the redevelopment of Brentwood Town Centre.
Last week, Sears Canada announced it would close its remaining stores effective early in the new year. This includes the Burnaby locations at Metropolis at Metrotown and Brentwood Town Centre, which currently employ 122 and 99 people, respectively.
While the future of the Metrotown site remains unknown, there is a plan on the books for the space at Brentwood after Sears closes its doors for good, according to Shape Properties.
“The closing of Sears, while sad from one perspective – you hate to see businesses go under – I think here it becomes a positive that we can continue with the vision, and continue probably faster and smoother,” said Darren Kwiatkowski, executive vice-president, development and acquisitions.
Shape Properties owns the 28-acre site at 4515 and 4567 Lougheed Hwy., and work is currently underway on the first phase of the site’s redevelopment. Dubbed “The Amazing Brentwood,” the Brentwood Town Centre redevelopment will include the construction of more than 6,000 new homes and 1.1 million square feet of commercial space.
Work is underway right now on the first phase of the project.
The logistics of Phase 2, which includes the northwest corner of the site, are being worked out right now.
The existing Sears location and surrounding parking lot is all part of the third phase of the project.
“The plan sets out the principles. As we move forward over time, how much of the mall is demolished and rebuilt and how much is repurposed or reused, those decisions kind of get made at the time based on cost and practicality,” he said. “It’s safe to say the parts of the mall that will remain will undergo renovation and updating so that it all feels shiny and new.”
Asked if Shape has any prospects for a new tenant for the Sears space once it closes, Kwiatkowski said they don’t. In fact, the company might not even bother renting out the space, he said.
“It would be short term, if there was a tenant, but we’re studying that right now as far as what we do in the interim,” he said.
It could be that Shape will need the space for its sales centre or other existing clients currently housed in spaces in the northwest corner of the site, which would be forced out once construction on Phase 2 starts, he added.
“At the end of the day, there will be more shops, more restaurants and more jobs than were lost at the Sears, so I think it’s a boost,” Kwiatkowski said, adding the goal of the redevelopment is to create a walkable community that includes a mix of residential and commercial opportunities.
Posted by Brentwood Station at 8:50 AM 2 comments: