According to the City of Burnaby website, the development of a pedestrian/cyclist oriented linear park connecting Brentwood Town Centre and Burnaby Heights will begin in 2016.  The north-south linear park will be situated on the eastern side of Willingdon, beginning at Brentlawn Drive and ending at Pender Street.  The City recently approved the demolition of a City-owned house at 4504 Napier Street to make way for the park.
Posted by Brentwood Station at 6:09 AM 2 comments:

Talk of Trattoria in Brentwood

The latest renderings of the Brentwood Mall Redevelopment have begun to show the name, "Trattoria" restaurant.  The article below has confirmed that Glowbal Collection of Restaurants is in discussions to possibly open a new Trattoria in Brentwood by 2017 at the earliest.


Vancouver restaurant scene gets lucrative vote of confidence from Glowbal

VANCOUVER — Emad Yacoub couldn’t be more bullish about the future of Vancouver’s restaurant industry.
The energetic CEO of the Glowbal Collection of Restaurants plans to open four new eateries and a new cocktail lounge by the end of 2015 — open he expects will help boost company revenues from $40 million a year to $60 million a year.
“I have a very strong belief that the next six or seven years in B.C. will be amazing growth years,” Yacoub said in an interview. “All my construction industry friends are investing a lot in the industry now and that will filter through to our sector so we want to hit the ground running next year.”
The Glowbal group will soon add substantially to its current stable of eight restaurants, two lounges and two takeout establishments.
Two new Trattoria restaurants — emulating the popular mid-priced Trattoria outlet that opened on West Fourth Avenue in 2008 — will open next year. The first is under construction at Park Royal in West Vancouver and is to open the spring. Yacoub expects the Park Royal location will become a $6-million-a-year operation — attracting shoppers, soccer moms and family diners, among others.
The second new Trattoria will open in a new Bosa Properties project at Kingsway and Willingdon in Burnaby in December 2014.
Yacoub already talking to Brentwood Mall officials about opening a Trattoria outlet in the Burnaby mall by 2017 or 2018.
Much of Glowbal’s near-term growth will be tied to the $750-million Telus Garden office-residential-retail development, scheduled for completion at Robson and Richards by 2015. Glowbal will open a casual market restaurant in the complex late next year. Shortly after that, it will open anew 15,000-square-foot flagship restaurant with 300 indoor seats and a 150-seat patio in Telus garden. It will bookend that with a cocktail lounge by late 2015.
Glowbal is investing millions in its three Telus Garden operations. Yacoub said big investments are necessary to seriously pursue the best new business opportunities.
He said the Yaletown market has changed considerably since Glowbal opened its first restaurant there — the Glowbal Grill — in 2002.
“When I first went to Yaletown, there were just four or five restaurants, but now there are 32 and everybody nibbles at everybody else’s business,” Yacoub said. “It almost doesn’t matter how good you are now.
“Tourism is 30 per cent of the Vancouver restaurant business and when tourists walk the streets, they don’t realize which restaurants are good and which ones are bad. So you’re fighting a losing battle.”
He said about 4,300 people work in the Yaletown neighbourhood, while Telus Garden alone will house almost 5,000 employees.
“I’d be an idiot not to go in there and secure all the (restaurant) locations,” said Yacoub.
The 49-year-old, hands-on restaurateur — who was recently named the Canadian Restaurateur of the Year at the 25th annual Pinnacle Awards — felt it was time to slow down his working pace two years ago.
But then he saw his company struggle a bit and realized if he backed away from the business, it might only survive for another 10 years.
“So I felt I had to put my feet back in the fire,” Yacoub said.
He adopted a gluten free diet, took up regular exercise and dropped 25 pounds so he could be at his physical best to take Glowbal to the next level, which he envisions as a $100-million-a-year company.
“I understand that the decisions I have to make now are just pure business decisions, not decisions based on emotions, which I have done in the past,” Yacoub said. “Now I’m acting more as a CEO, which means making hard decisions sometimes but decisions that only make the company stronger.”© Copyright (c) The Vancouver Sun
Posted by Brentwood Station at 6:21 AM 2 comments:

Dawson and Willingdon cleared for development

The site at the corner of Willingdon Avenue and Dawson Street has been cleared to make way for a low-rise complex with a street-level restaurant to be built by Amacon.  There is no word yet on what kind of restaurant will go in there. 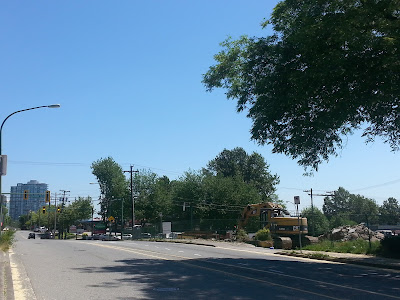 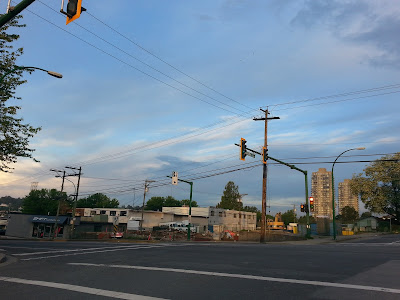 Posted by Brentwood Station at 10:36 AM 2 comments: