Complete network of barrier free sidewalks must be a priority

It has been a while since I have talked about the importance of sidewalks in creating complete neighborhoods (sidewalks) and how the current system of sidewalk-building wrongfully places the burden of building those sidewalks on existing property owners.  In a region where property values have unreasonably soared beyond the reach of new buyers, the property tax burden has accordingly increased for existing property owners, putting more tax dollars into government coffers.  That revenue coupled with increased revenues from the density bonus funds collected by the City of Burnaby should allow the city to spare some funds for improving our network of sidewalks for people with disabilities.  In 2018, we should not be allowing disabled people to struggle with getting around their neighborhoods like the poor fellow in the Bunaby Now article below.

Wayne McQueen navigates the bumps and broken sections of sidewalk along Smith Avenue in the Metrotown area in his motorized scooter
The 71-year-old manages to be mobile in his scooter despite having a condition called charcot foot, a result of his diabetes, which can cause the bones in his feet to break if he walks. But he doesn’t understand why a big city like Burnaby can’t get its sidewalks into shape for people like him in scooters or mothers pushing strollers.
“It’s very hard to manoeuvre with a mobility device,” McQueen said, adding that he’d like to see ramps on all corners along Smith Avenue. “It also would help young women with their strollers to have a ramp.”
At Smith and Sandell, the sidewalk, which is only on one side of the street, ends with no curb letdown, but a pathway going east with bark mulch allows McQueen to eventually cross the street. Father down at Hertford and Smith again there is no curb letdown and McQueen turns east and goes down half a block till he can access the road where there is a private driveway, then he rides along the street until he finds another driveway to get back onto the sidewalk.
In places, there are small, steep inclines on the sidewalk beside a driveway where he gathers speed in his scooter to make it up the hill, something that make him fearful for his safety.
“I could have tipped the thing over backward because it’s too steep,” he said of the sidewalk beside a driveway.
McQueen said he often feels very nervous riding his scooter in traffic as he goes down Smith Avenue to his doctor’s appointment with traffic.
“I think (city officials) need to take into consideration standards for making things mobility-safe – that doesn’t seem to be their priority, that’s just my opinion,” McQueen said, who has lived in Burnaby since 2008.
Posted by Brentwood Station at 9:21 AM 5 comments:

Solo District's 3rd tower will soon begin to rise as the western end of the site on Rosser Ave has been undergoing excavation for several weeks now.   Once completed, the lower level of Solo District will become an open space situated between the 4 towers. 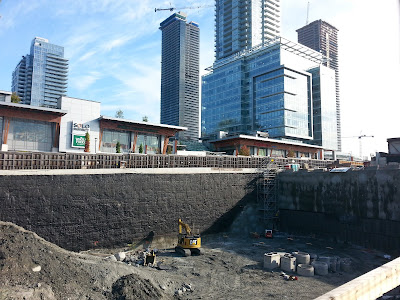 Posted by Brentwood Station at 11:24 AM 3 comments: