The tunnel and entry/exit from Lougheed Hwy into Brentwood Town Centre's future underground parking lot appears to be marked out when seen from when viewed from the Sears rooftop parking.  The parts not yet dug up will most likely be the locations of future commercial spaces. 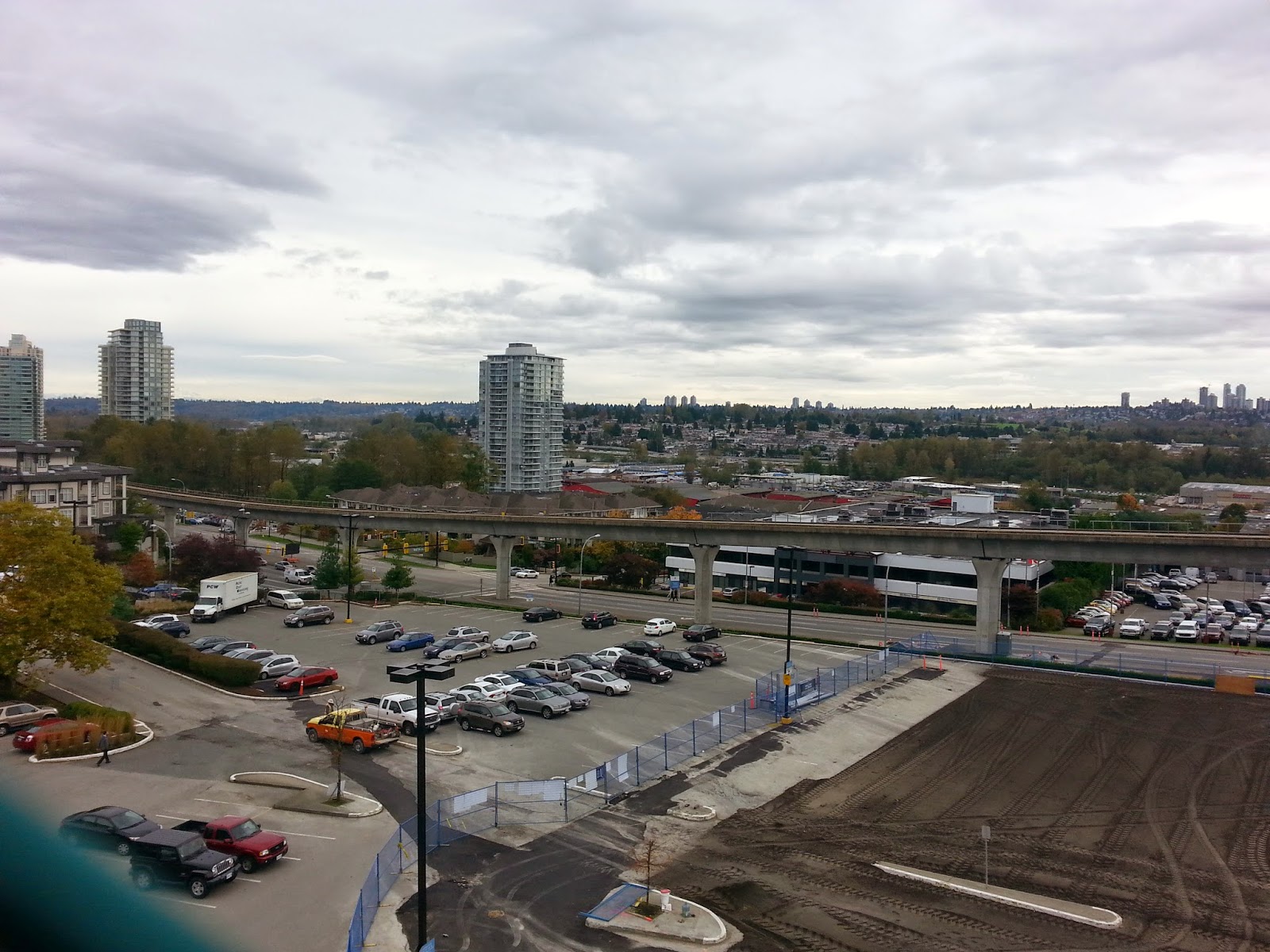 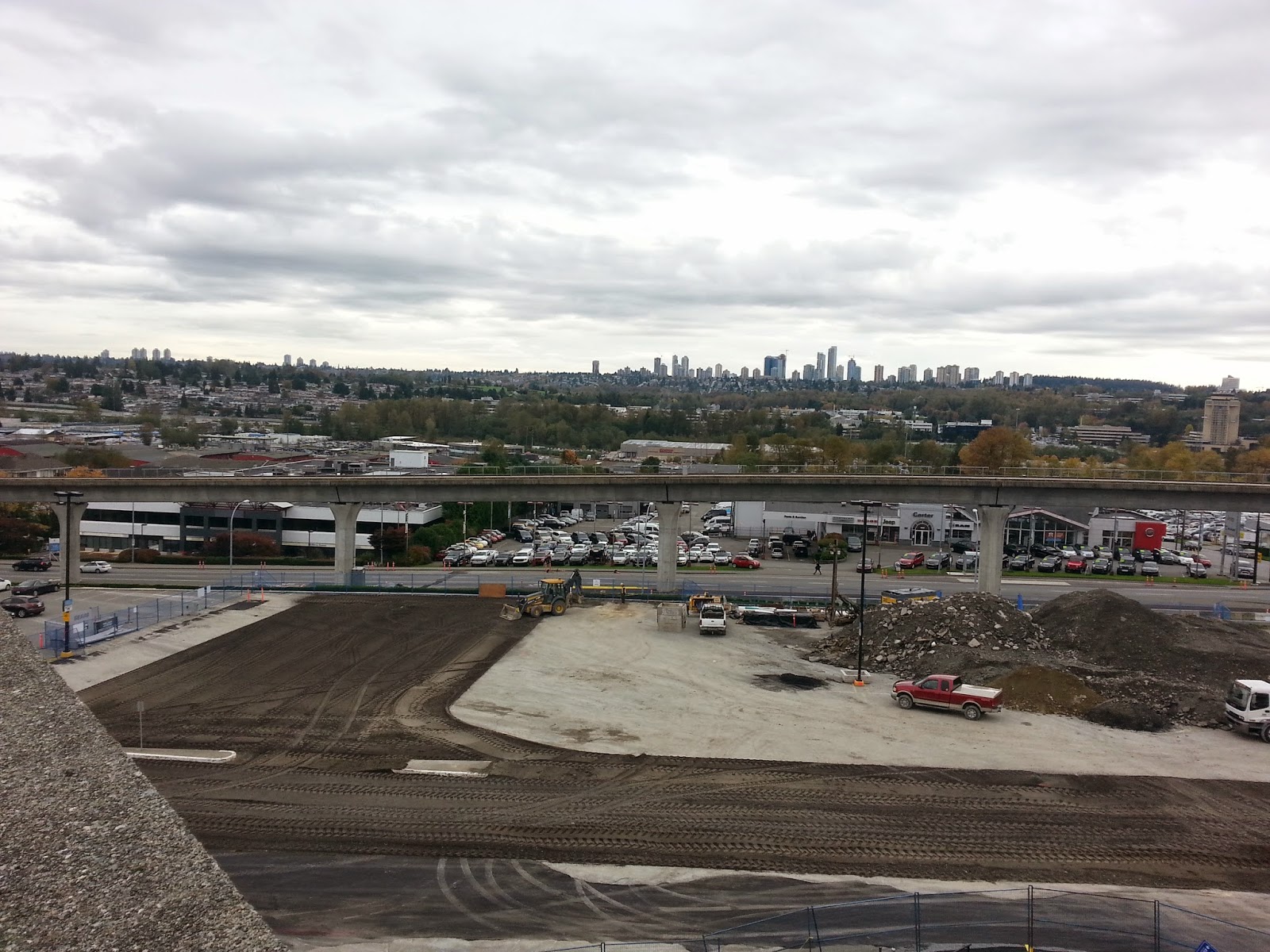 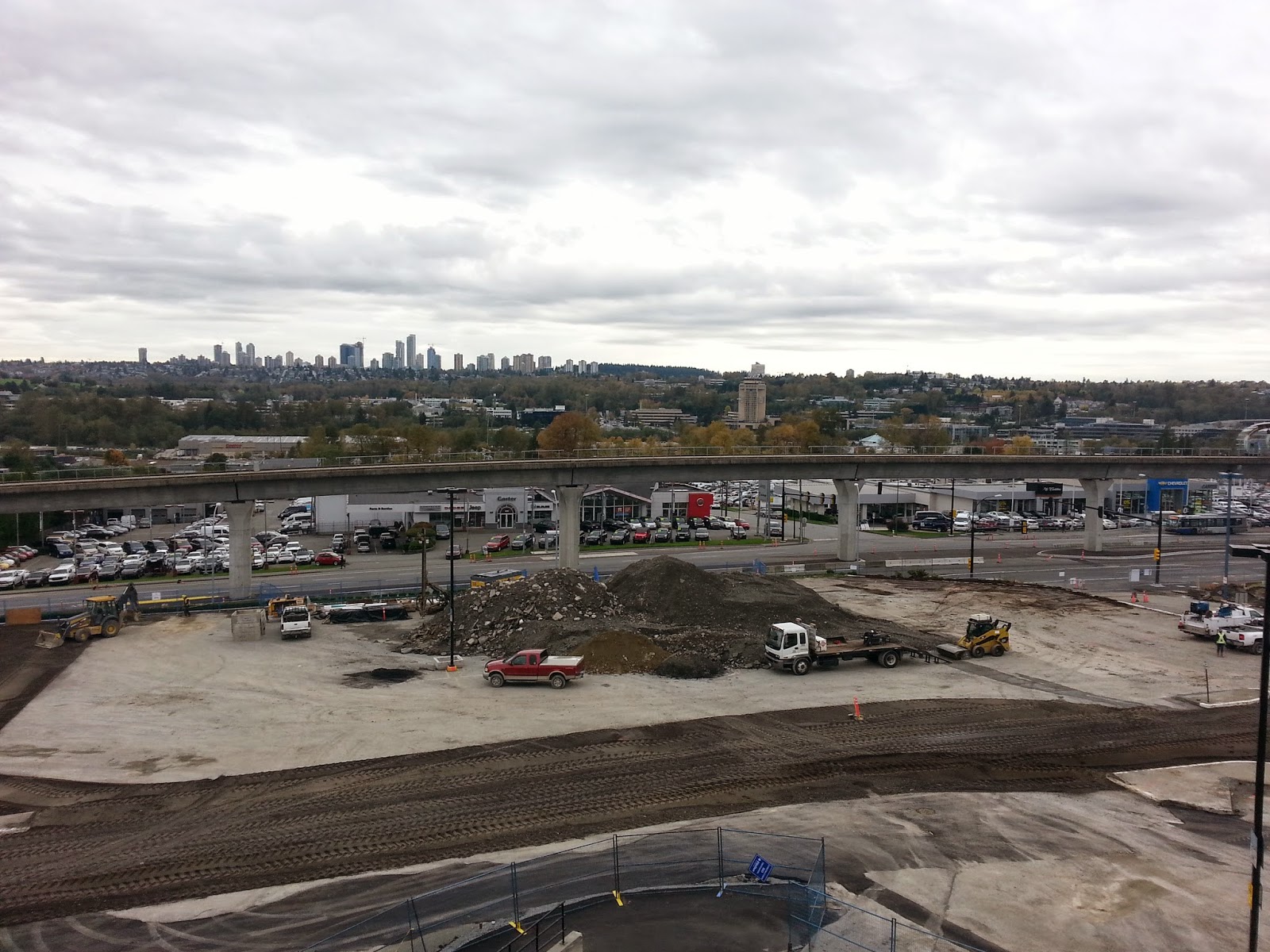 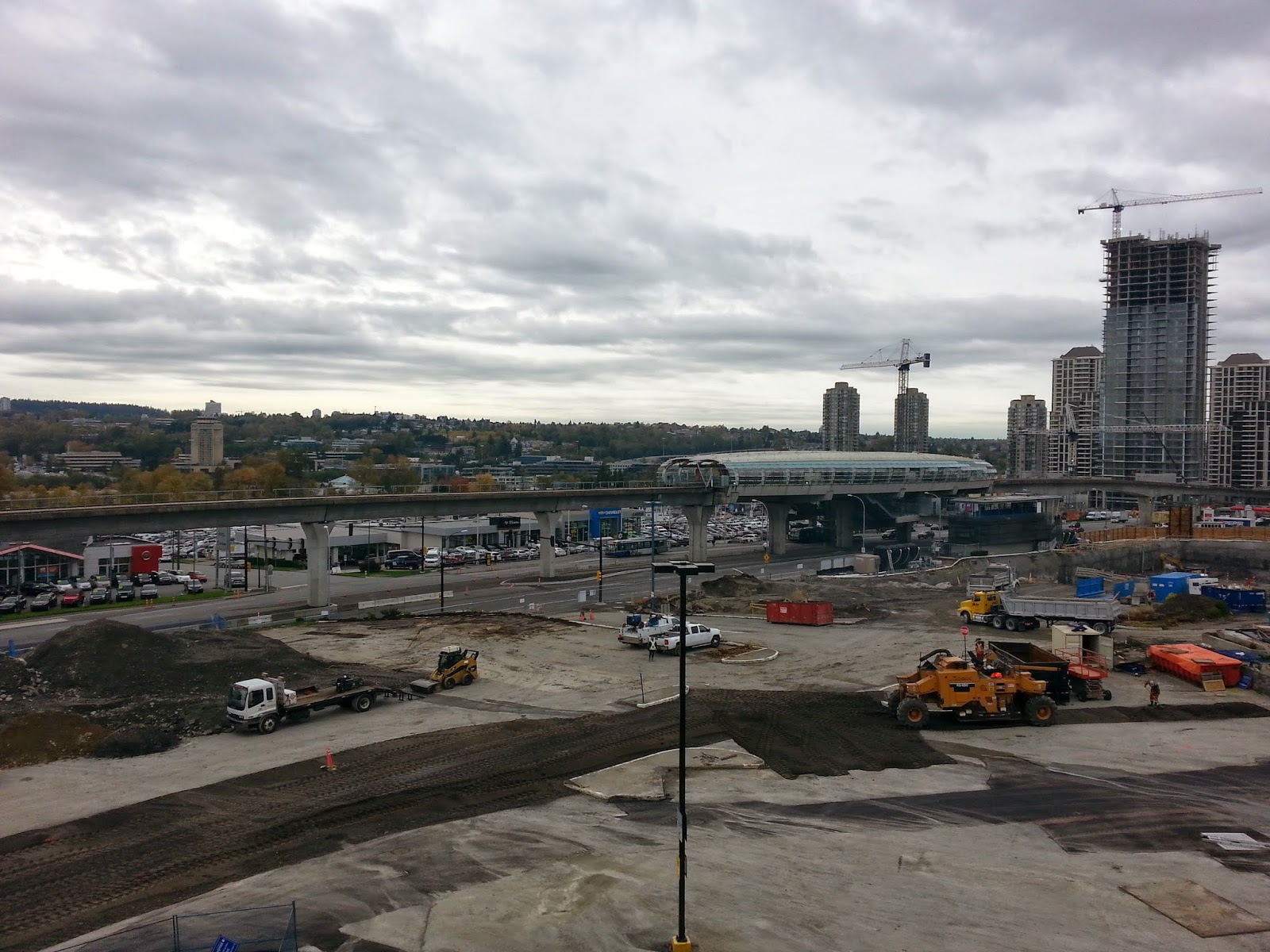 Posted by Brentwood Station at 10:51 AM 7 comments:

The following Burnaby NewsLeader article  mentions that the City sees the northeast corner of Halifax Steet and Willingdon Avenue as the ideal location for a new community centre.  It would be built within the mixed-use development there during a later phase of the overall redevelopment of Brentwood Mall.

A new arena and arts centre?

A new performing arts centre in Metrotown, an arena in Edmonds, and new Brentwood and Cameron community centres.
Such projects are among the new priorities and changes being proposed for Burnaby's community benefit bonus policy, which council was to consider on Monday.
Since the policy's inception in 1997, Burnaby has received more than $154 million in cash and community amenities in exchange for city hall allowing additional density to be built on specific development sites, said a city staff report.
When an amenity, such as non-profit office space, a seniors centre or childcare facility, for example, can't be accommodated within a development project, the developer gives the city a cash contribution instead.
Until now, that money has been deposited in accounts to be used on future amenities within the same town centre as the development it came from. The planning department is now proposing it could be used on amenities located anywhere within that quadrant of the city.
The proposed policy change would also allow the funds to be used on amenities within Burnaby's civic centre area, which includes city hall, Deer Lake Park, and Burnaby Lake Sports Complex, to serve all Burnaby citizens.
And the change would add a priority amenity program, which sets out a wish list of significant amenities that council wants to see built with the developer contributions.
In Metrotown Town Centre, or the southwest quadrant, that priority is a new performance and event centre. "The facility would be capable of hosting installations, performances and significant gatherings, and would be intended to be a local community and civic-oriented centre that is highly accessible to citizens in Metrotown and Burnaby as a whole," said the report.
While the location will be determined by opportunities coming out of new development in the area, ideally it would be in the area of Kingsway and Willingdon Avenue, it said.
In Brentwood Town Centre, or the northwest quadrant, a new Brentwood community centre is at the top of the priority list. As reported in the NewsLeader, the city and mall owner Shape Properties is looking into the feasibility of building such a facility as part of the Brentwood mall redevelopment.
The report said the ideal location would be along Willingdon, near Halifax Street, within the podium of a mixed-use development.
Also a priority for the northwest quadrant is a new linear park along Willingdon that would connect the Heights and Brentwood neighbourhoods, providing access to amenities, services and recreational facilities for residents of both areas.
The land for the park, which would likely include pedestrian and cycling paths, is already available, having been acquired over time by the city, originally for road and utility purposes, the report said.
For Edmonds Town Centre, or the southeast quadrant, a new Edmonds arena has been identified as a priority. It would be the first such facility in South Burnaby.
And in Lougheed Town Centre, or the northeast quadrant, the priority project will be replacement of Cameron Recreation Centre, including a pool and a replacement of Cameron library branch.
With planning work underway for the redevelopment of the Lougheed mall site, several options are being considered for the amenities, including where they should be located and whether they should be together in the same building as they are now. The area currently doesn't have a pool, and the new rec complex and library would likely be larger than they are today.
The plan would continue the existing policy of designating 20 per cent of those cash contributions into a city-wide housing fund for affordable and/or special needs housing projects.
wchow@burnabynewsleader.com
twitter.com/WandaChow

Bigger and deeper hole in the ground

The excavation for Phase 1 of the Brentwood Mall Redevelopment continues full speed ahead.  I wonder where all that dirt is going? 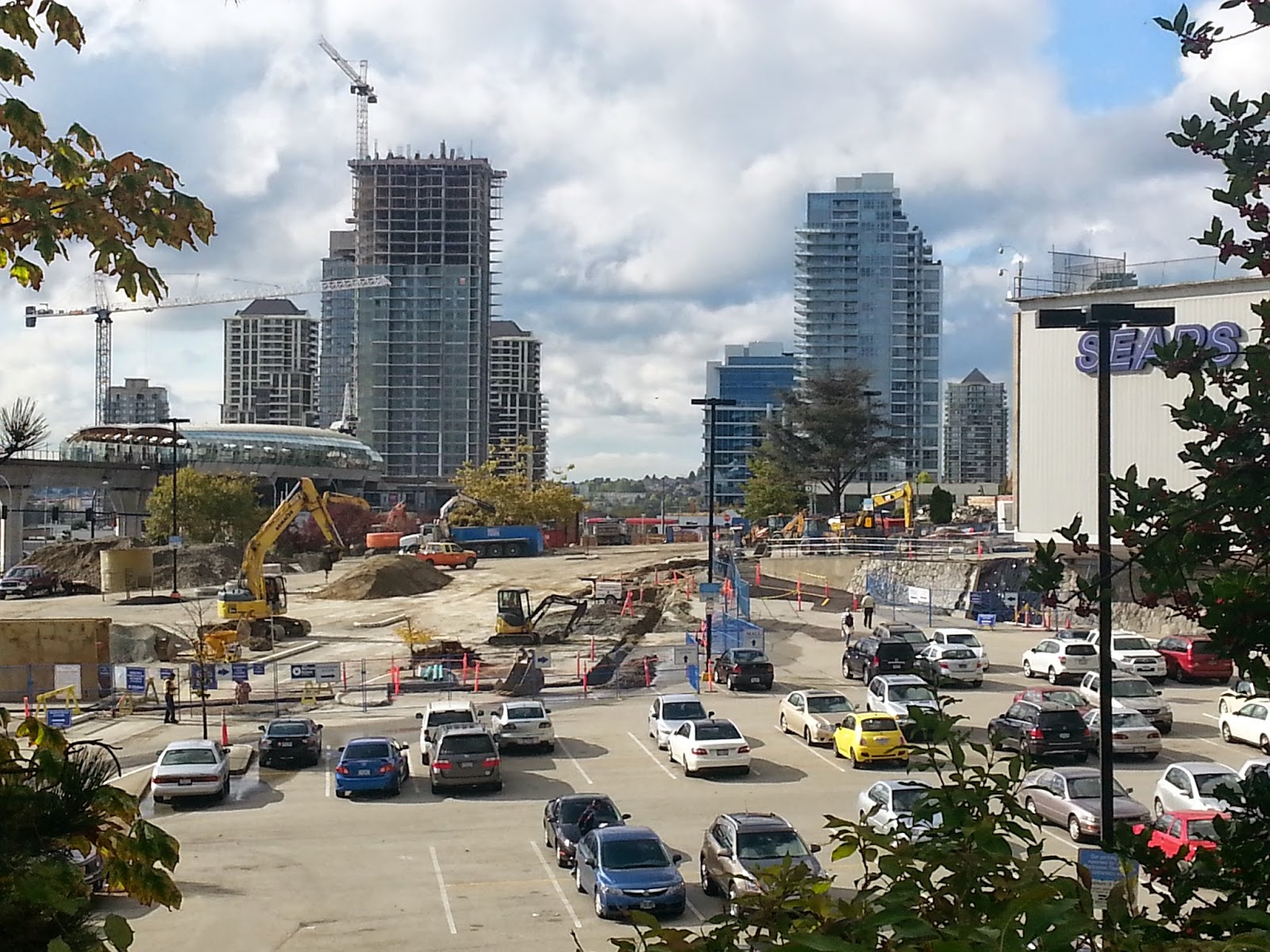 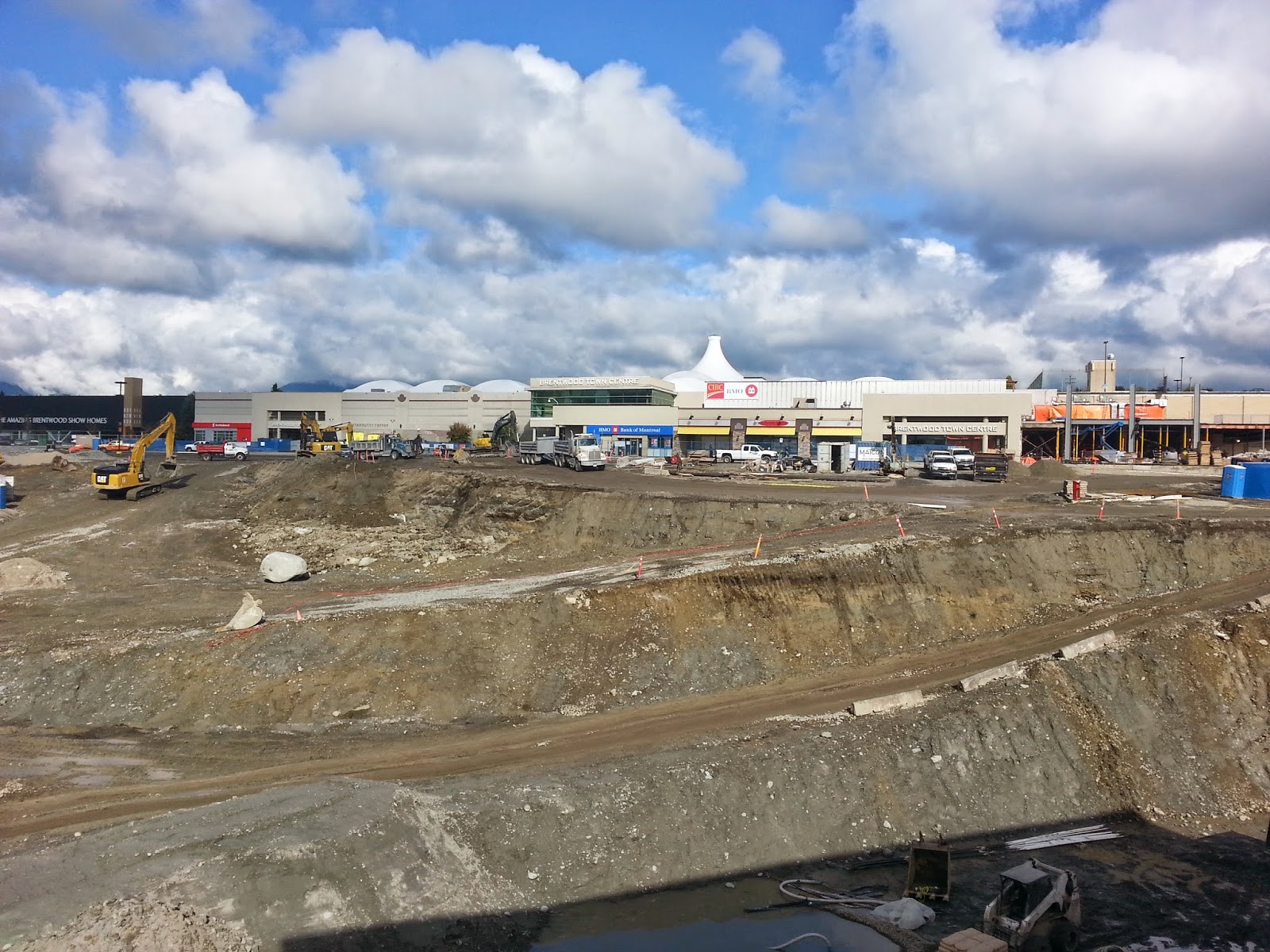 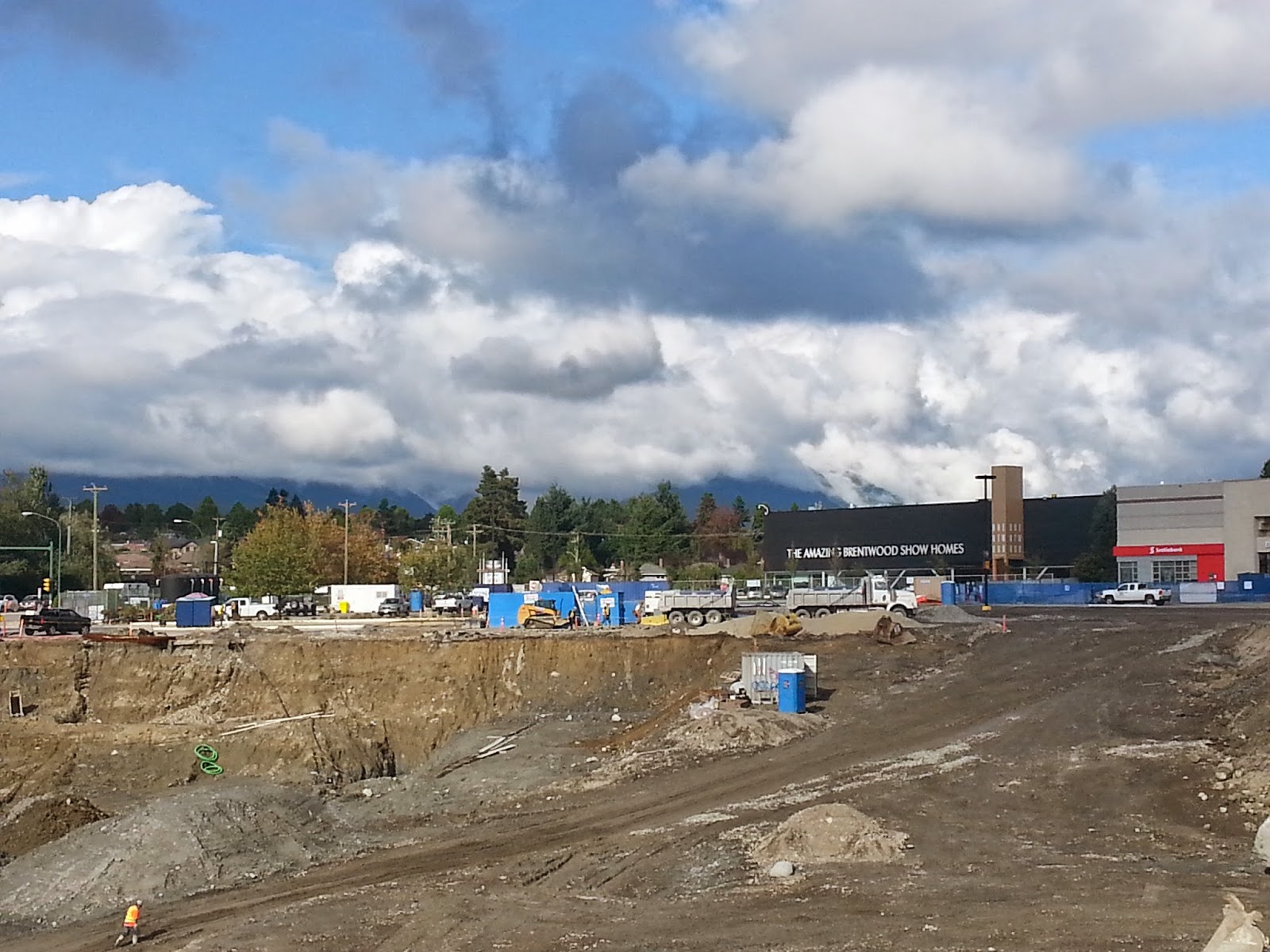 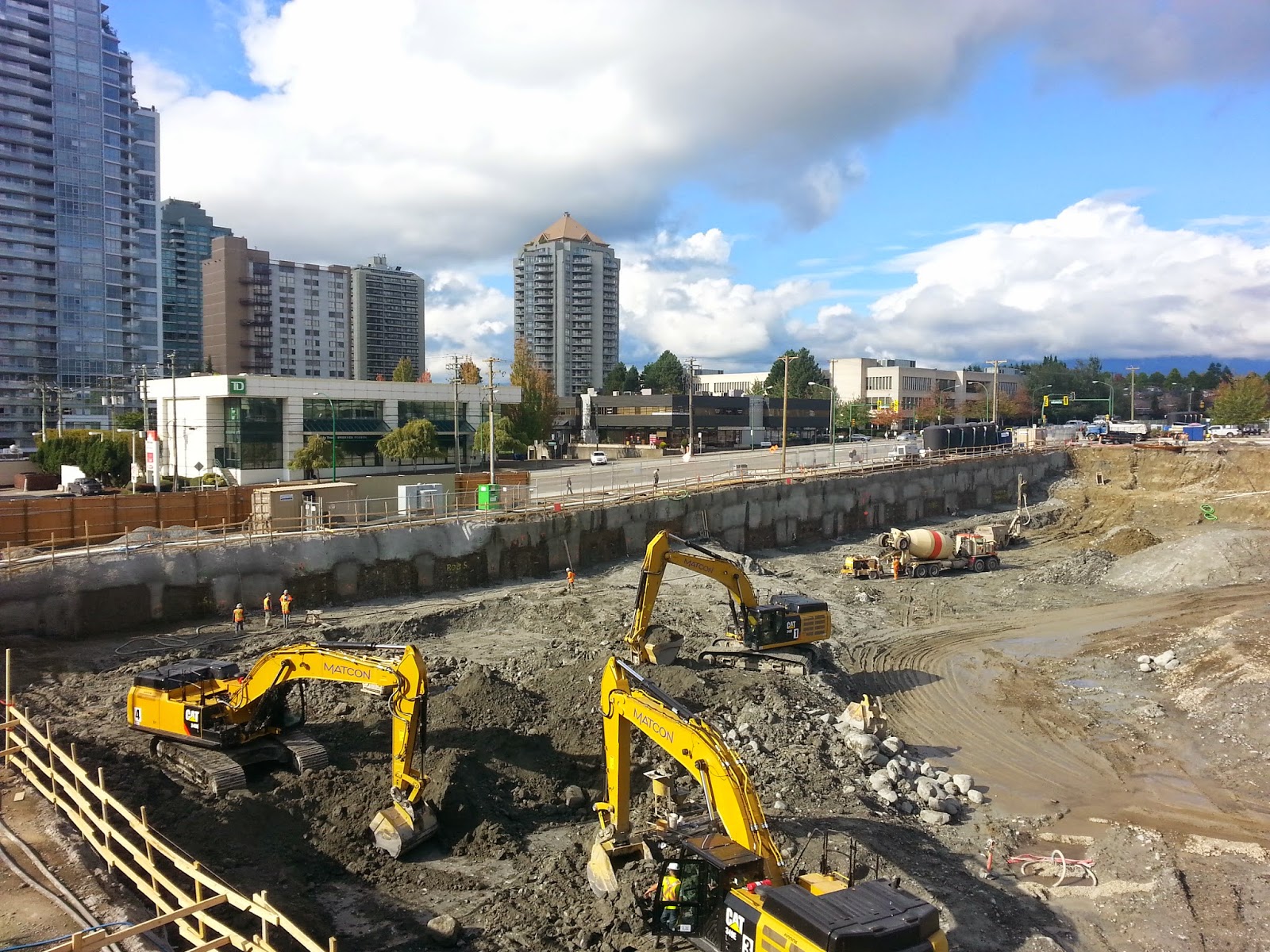 The following Burnaby NewsLeader article provides some details about a highrise proposed for Madison Ave south of Dawson Street.

A highrise development is being proposed for an industrial part of the Brentwood area that is gradually being converted to a residential neighbourhood.
Polygon Development has applied for a rezoning of 2338 and 2440 Madison Ave., located on the east side of Madison between Dawson Street and the BNSF Rail line.
It wants to build a tower with a podium level of apartment and townhouse units. Parking is expected to be above ground, camouflaged by housing units in front, due to high groundwater and geotechnical conditions on the site, which is near Still Creek.
The lot at 2338 Madison is currently vacant and 2440 Madison is partly occupied by a BC Hydro transmission line connecting to the Horne Payne Substation, said a city staff report. It's surrounded by older industrial buildings to the north and east, newer highrise residential towers to the west and the rail line, future Burnaby Auto Mall and the Willingdon Business Park to the south.
The 1996 Brentwood Town Centre Development plan designates the properties as "succession," meaning industrial land proposed for eventual transition to multiple-family residential.
The developer was encouraged by city hall to acquire part of the Hydro property to the south to be included in the project. The rest of BC Hydro's property could be acquired in future for consolidation with 2300 Madison Ave., the report said. That would allow for the extension of the trail network and stormwater management project that was done as part of the developments to the west.
The developer will also be required to design and pay for a pedestrian and cycling overpass over the BNSF Rail line to connect Madison to an existing public trail to the south.
And because of the site's proximity to the rail line, "a noise study is required to ensure compliance with the council adopted sound criteria."
Burnaby's planning department will work with the developer to prepare a plan suitable for presentation to a future public hearing.
wchow@burnabynewsleader.com
twitter.com/WandaChow
Posted by Brentwood Station at 2:59 PM 3 comments: