With the recent hot spell leaving me feeling lazy, I haven't done much more than muster a few photos over the past month.  Brentwood Mall's 3rd Tower is being forwarded to public hearing and Whole Foods will be opening soon as August is soon upon us. 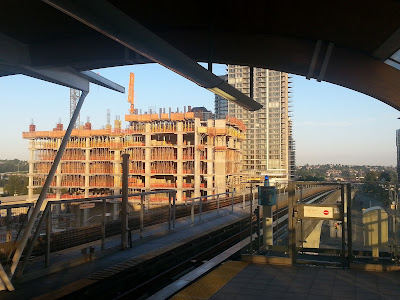 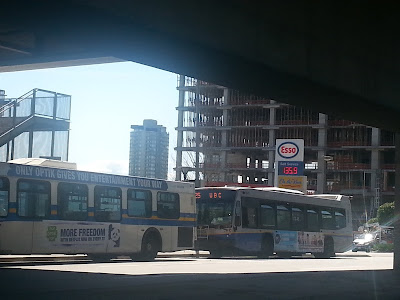 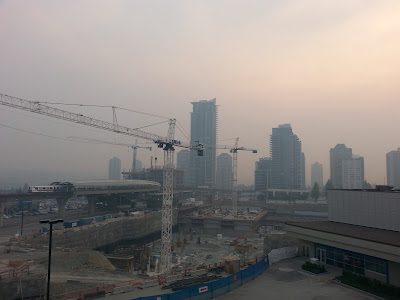 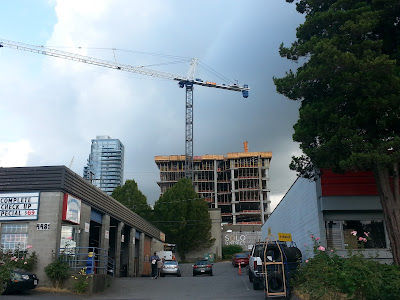 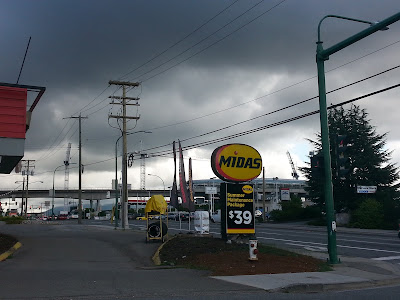 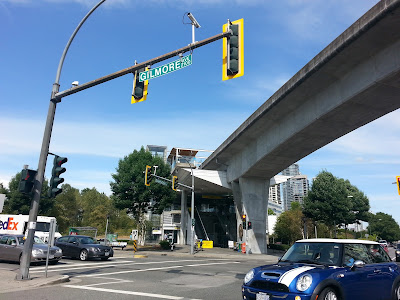 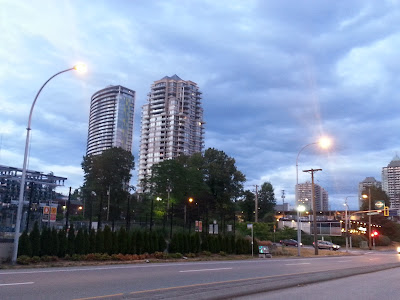 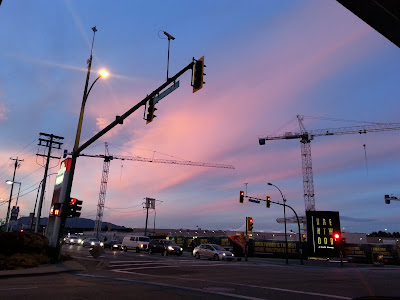 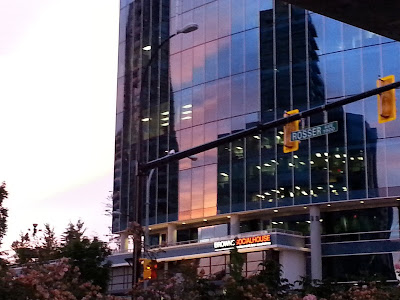 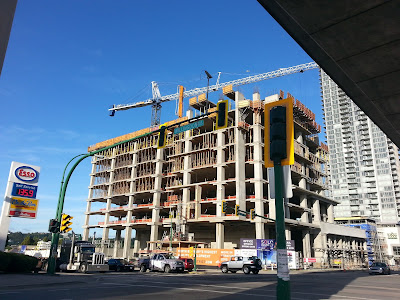 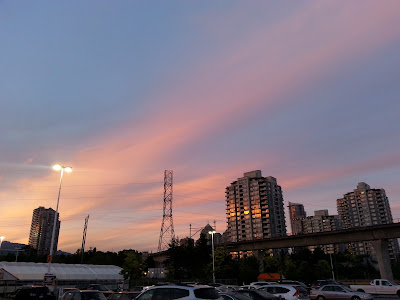 The Dragonwood Development, or Woodlands Development as it is referred to more recently, will be going to a public hearng at the City of Burnaby Council Chambers on July 21 at 7:00 pm.


The following article is from the Burnaby Now.

The Woodlands development, put forward by Concord Pacific, would see the industrial area which lies south of Lougheed Highway, east of Beta Avenue, west of Delta Avenue and extends south toward the rail line, replaced with residential and public space, including a park and a potential school site.


“This is a big project and one that’s been a long time coming to fruition,” Mayor Derek Corrigan said at Monday night’s council meeting.


A city staff report detailing the conceptual master plan was presented to council at the meeting.


“It is a comprehensive document that shows a major development in the eastern section of our Brentwood development plan, and these are former warehouse lands that are going to be going to residential development,” Corrigan said. “So I’m looking forward to seeing how the public responds to it.”
The plan is divided into six areas: the Lougheed parkway at the north end of the site; the hillside area which would include up to four high-rises ranging from 35 to 55 storeys; the flatlands area which would include mid-rise buildings four to 15 storeys high and two high-rise buildings ranging from 30 to 40 storeys; the parkside area northwest of the proposed park, which would include up to four high-rise buildings, ranging from 25 to 45 storeys; as well as the park and riparian areas.
The park itself would be 13.32 acres. Some suggestions for the park area include field space, water features, a children's play area, terraced seating, and there is space that could be set aside for a new elementary school for the area. The riparian area would be an extension of the park surrounding Stickleback Creek, and could include low impact trails and pathways, as well as streamside protection to improve fish passage and wildlife habitat.
James KM Cheng Architecture was hired by Concord Pacific to develop the plan.
The site includes four privately owned properties at 4756 and 4828 Lougheed Hwy and 2311 and 2316 Delta Ave.; and six city-owned properties at 4874 Lougheed Hwy; and 4818, 4828, 4829, 2235 and 2285 Dawson St.
The conceptual master plan and Phase Ia of the plan are going to public hearing in two weeks.
The hearing takes place in council chambers at city hall on Tuesday, July 21 at 7 p.m. For those who cannot attend, written submissions must be received at the city clerk’s office by 4:45 p.m. on the day of the public hearing. Burnaby council does not accept submissions regarding rezoning applications after public hearings.
- See more at: http://www.burnabynow.com/news/burnaby-s-woodlands-development-going-to-public-hearing-1.1995877#.dpuf

Posted by Brentwood Station at 8:11 PM No comments: 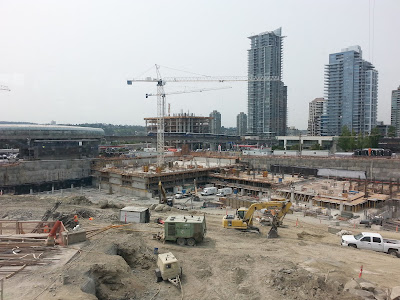 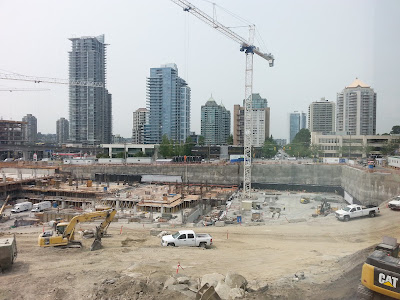 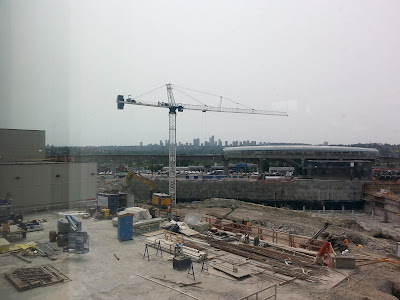 Posted by Brentwood Station at 9:36 PM No comments:

The site at 2360 Douglas Rd is up for sale as a future apartment development.  With Douglas Rd having begun to change with the Perspectives and Affinity towers being completed just west of this, 2360 Douglas Rd will begin to further connect the area around Holdom Station with the area just east of Brentwood Station.  As Concord Pacific's Dragonwood industrial site moves forward at Beta Ave and Dawson and Douglas Rd is eventually closed off at Lougheed Hwy, the rest of the industrial land will begin to give way to similar developments on Douglas Rd north of the railway tracks.

The following photo and description are from a listing at apartmentlocks.ca 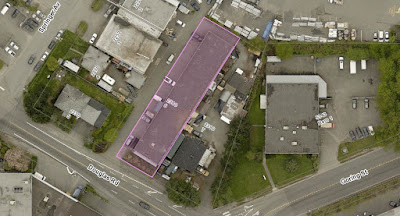 The subject property is part of a high-rise development site under the Brentwood official community plan in Burnaby. The area has seen major efforts by both developers and the city to gentrify the area and create a vibrant community for people to live and have easy commutes to the downtown core for work. The skytrain station is approximately 550 meters away ( 7 minute walk).  Brentwood is quickly becoming a charming and desirable place to live that will continue to grow and evolve. Currently the property is improved with an industrial warehouse.

Posted by Brentwood Station at 11:01 AM No comments:

When Kin's Farm Market closed at Brentwood Mall, the nearest places to get produce were Save-on-Foods, Costco or Buy-Low Foods at Parkcrest Plaza.  As of late June, Koby's Produce Town can be added to list of places to buy produce.  I was able to snap the picture below as they were closing up at 8:30pm. 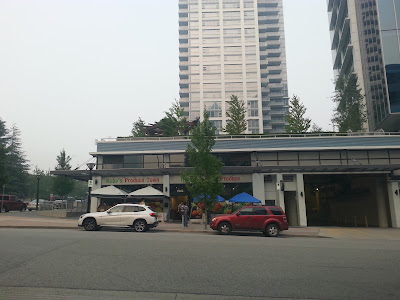 Posted by Brentwood Station at 9:11 PM No comments: 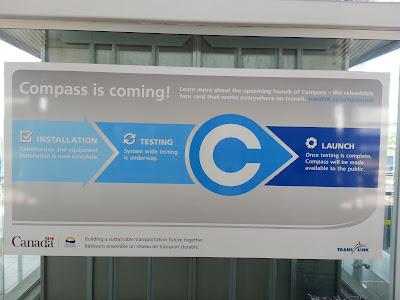 While transit systems around the world are constantly improving on their already superior service on scales that make ours look like a joke, we are unable to come up with competent officials and secure funding to just run what little we have.  Why do we have so little?  That question should be aimed at our so-called "leaders" of all political stripes.
Posted by Brentwood Station at 4:38 PM 2 comments:

According to an online retail leasing brochure at gilmorestation.ca, Phase 1 of the Gilmore Development will be situated at Gilmore Ave and Lougheed Hwy with phases 2 and 3 focusing on Carlton Ave and Dawson Street.

Undertaken by Onni Group the development will include "Carleton Plaza" which will be a main pedestrian access point to the site.

The Onni Group is planning a major redevelopment around the Gilmore SkyTrain station that will turn it into a "gateway" to the Brentwood Town Centre area.
The developer has applied for a rezoning to establish a conceptual master plan and a detailed first phase of development.
The property, identified as 4161 and 4171 Dawson St. and 4120, 4160, 4170 and 4180 Lougheed Highway, is almost 12.5 acres and located on the east side of Gilmore Avenue between Lougheed and Dawson.
While six of the parcels are vacant, two are home to light-industrial and office buildings and the largest is occupied by two mid-rise office buildings built in 1982.
A portion is taken up by the Millennium line SkyTrain station built in 2003.
Onni is proposing a highrise, mixed-use residential and commercial development with a substantial office component.
It also proposes building a new public road linking Dawson to Lougheed on the site to improve access to the station and pedestrian-oriented retail on Dawson, said a city staff report.
The Brentwood Town Centre Development Plan adopted by council in 1996 designates the site for high-rise housing and business park development "with a high office use component."
n 2002, the former owner of the property, Standard Life Assurance Company, received rezoning approval in principle for a proposed mid- and high-rise office project.
It was to be a new regional office for Standard Life and to include over one million square feet of office space.
It also included a smaller multi-family and mixed use component along Dawson.
But the rezoning never moved forward to final approvals "with the applicant citing changes in the office market which made the proposal no longer economically feasible," the report said.
Between 2004 and 2010 Standard Life tried to amend the redevelopment concept but one suitable to be forwarded to council never materialized.
The company sold the site to Onni last year.
The aim is to create a "mixed-use gateway" into Brentwood Town centre that's been long expected, the report said.
"While Burnaby has become a model for transit oriented development, including the Master Plan concepts for Brentwood and Lougheed Malls, the subject site is one of few within the region that have the opportunity to be fully integrated with SkyTrain at ground level, mezzanine level and potentially at track level, providing unprecedented access to transit by residents, employees, patrons and the surrounding community," it said.
"With this opportunity in mind, the Gilmore SkyTrain Station was purposefully scaled back in its form and materiality, so that in the future it could be fully integrated with surrounding development."
Burnaby's planning department will work with Onni on a concept and Phase 1 development plan. When it's complete, it will go to a future public hearing.
© Copyright Burnaby NewsLeader 2015 -
Posted by Brentwood Station at 6:34 AM No comments: