A few days ago, I noticed that the ramp to the Brentwood Station was removed to make way for the massive excavation for Phase 1 of the Brentwood Mall Redevelopment.  The massive site is nearly cleared for digging.

The only access to the station is now only from either side of Lougheed Hwy. 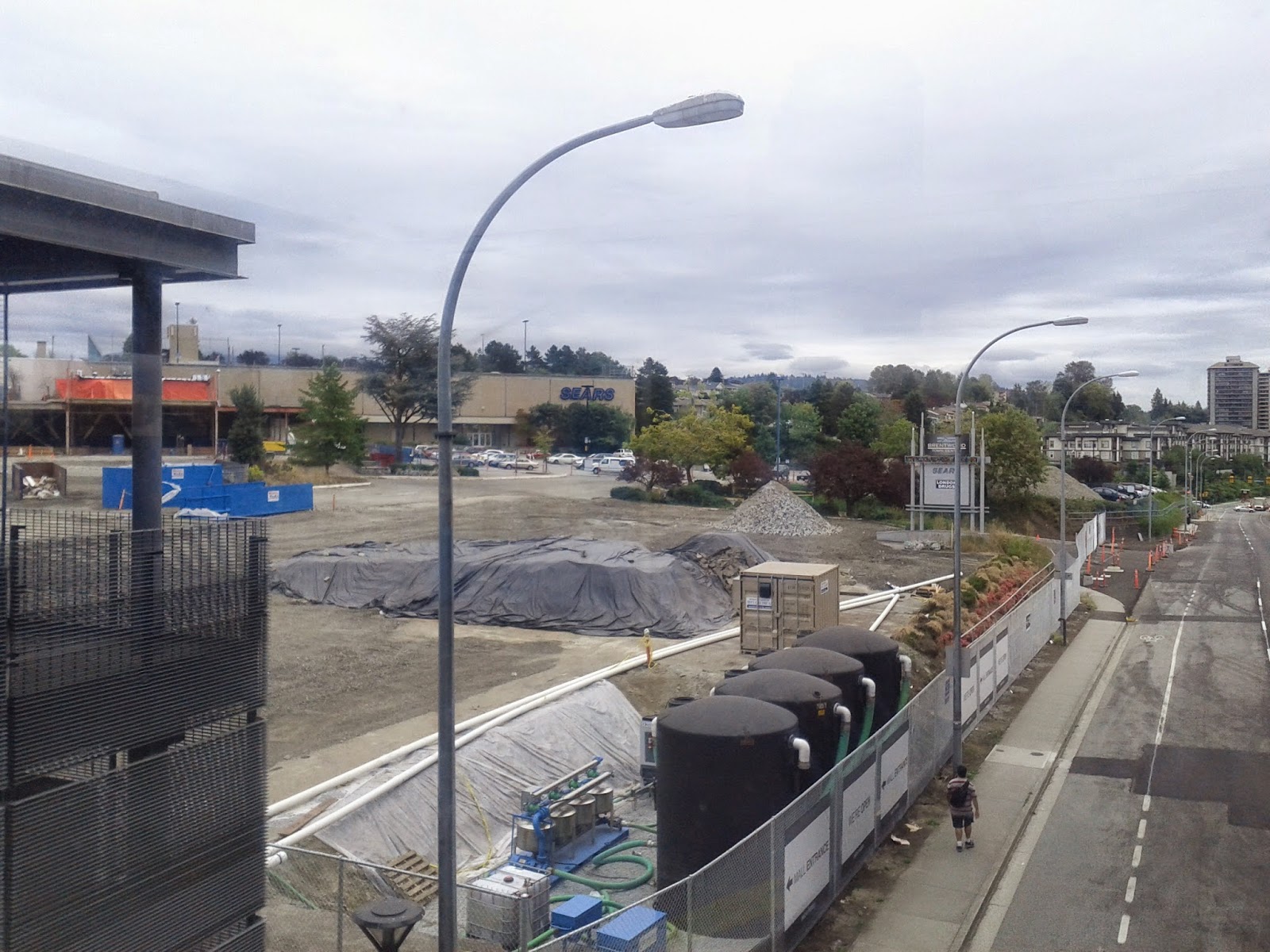 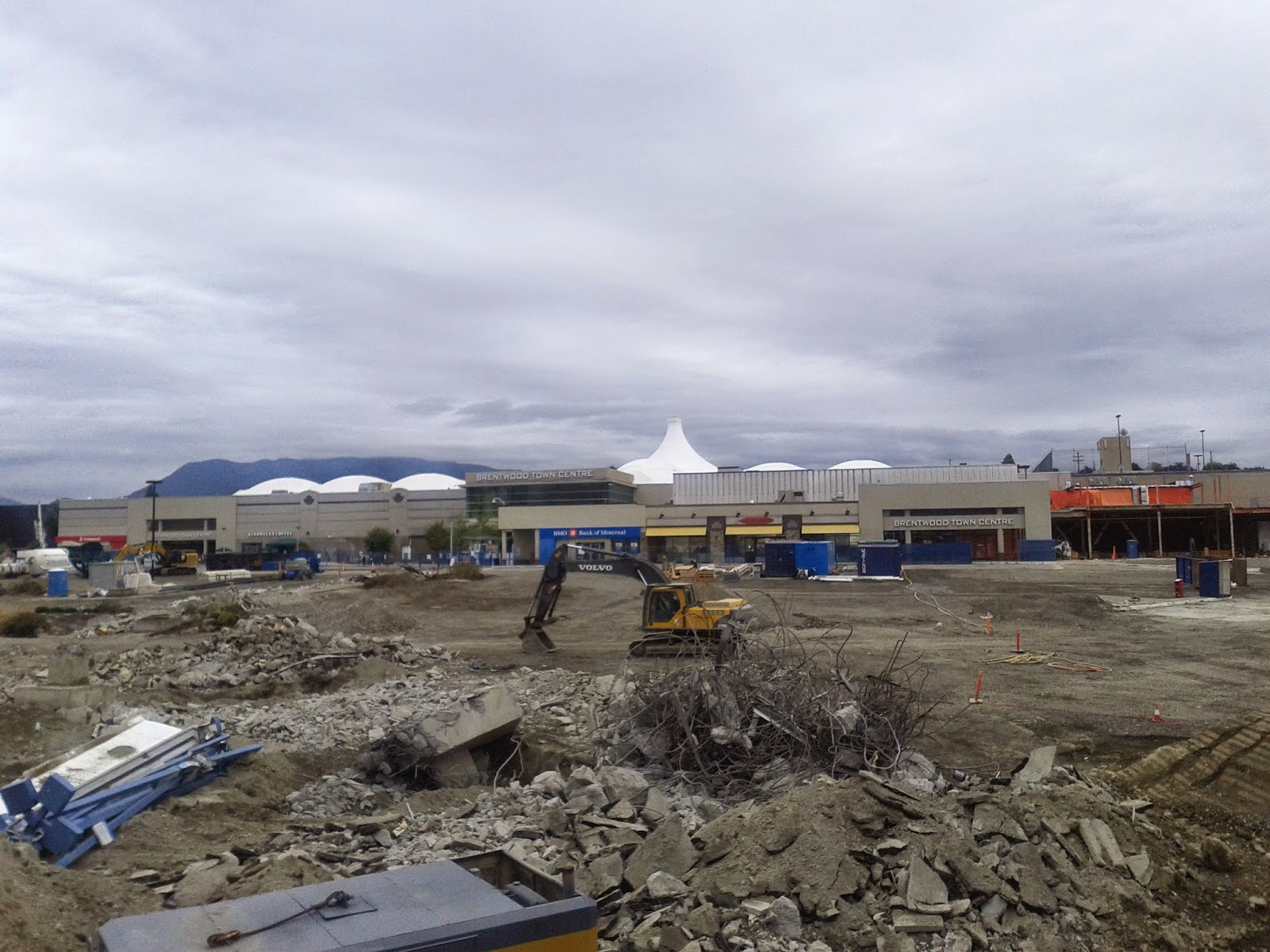 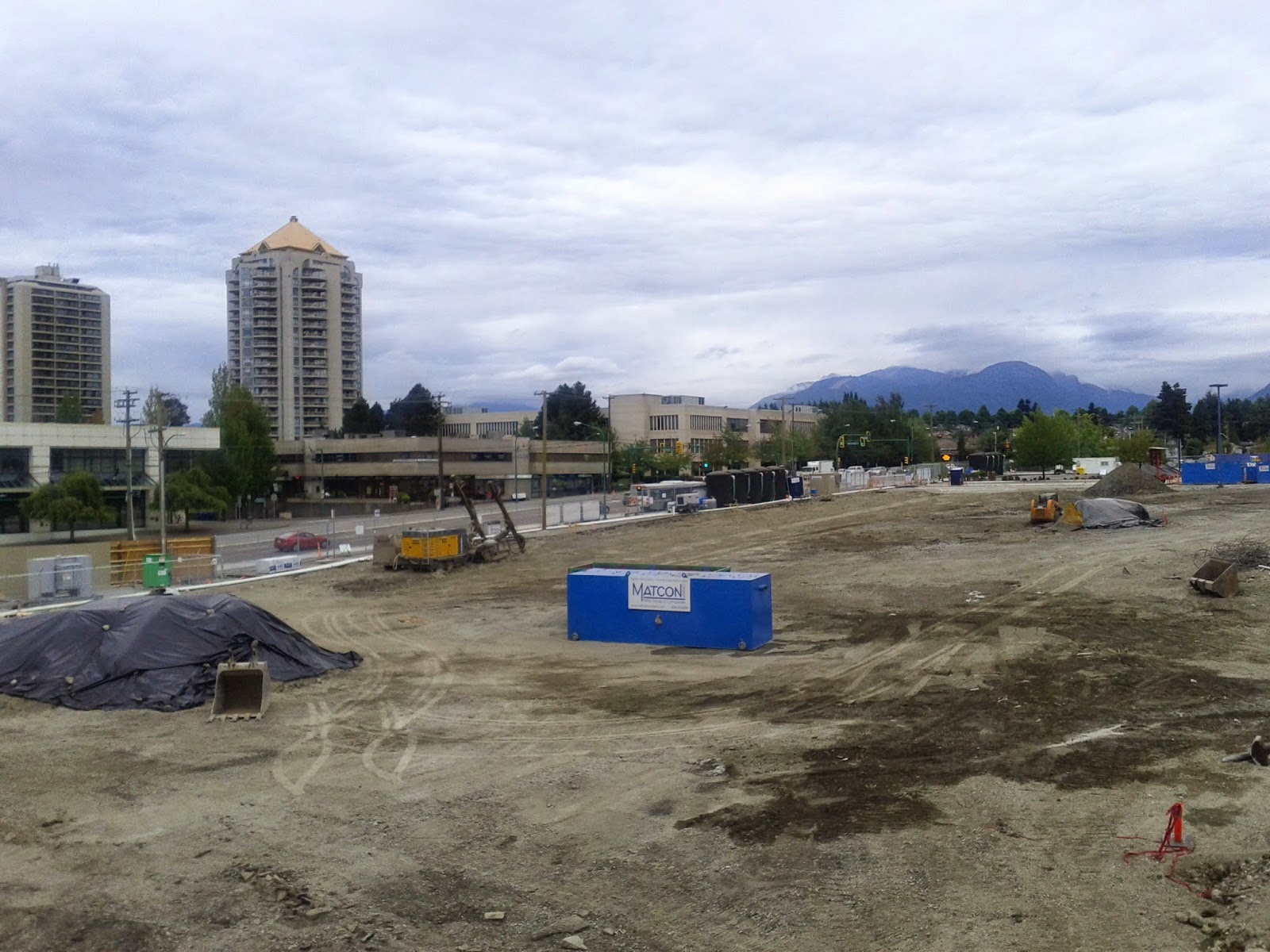 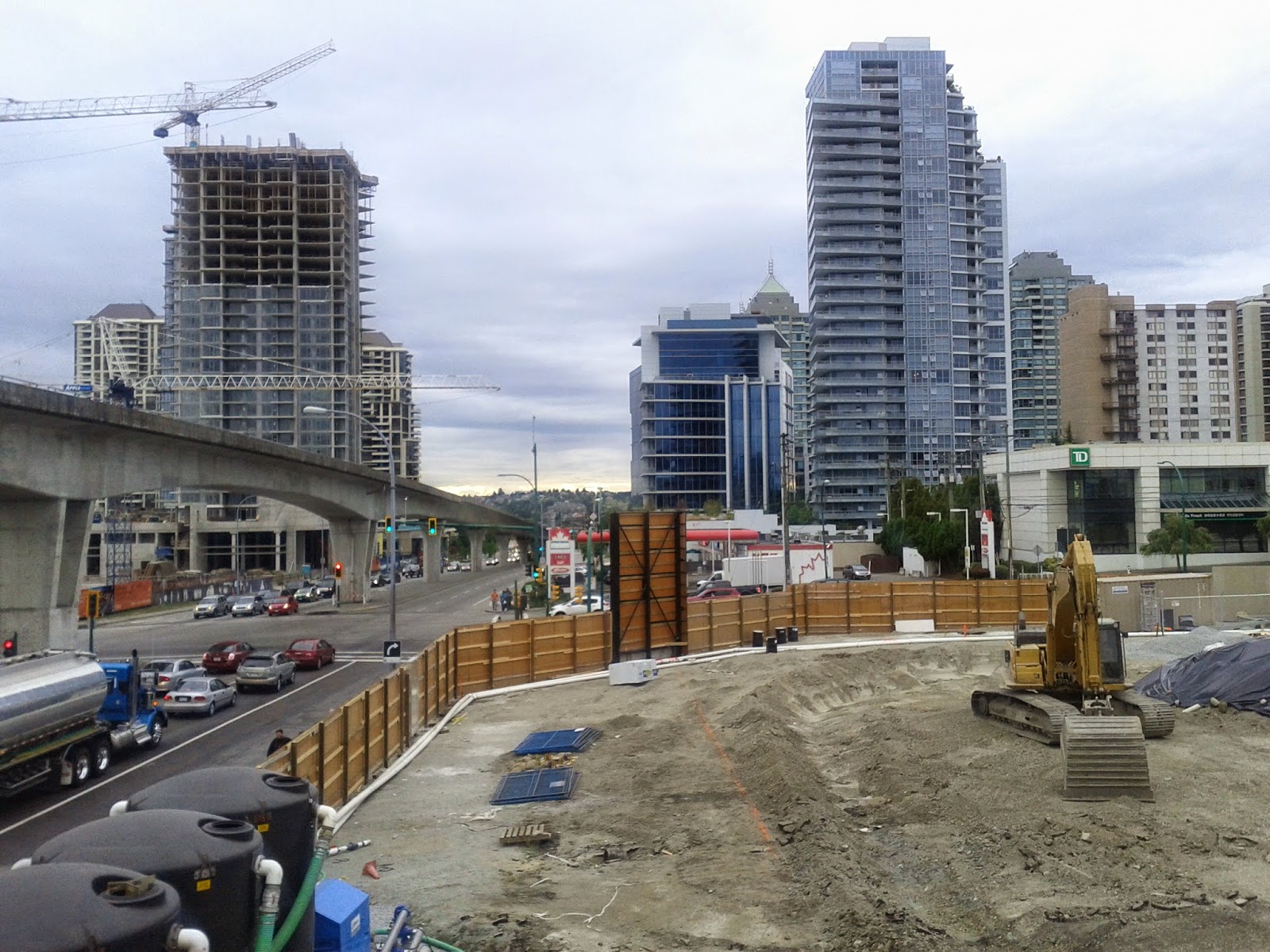 The first tower accompanied by Whole Foods will be ready for occupancy by 2015.  The project has progressed significantly since Morrey Nissan, Milestones and Good Year Tire cleared out. 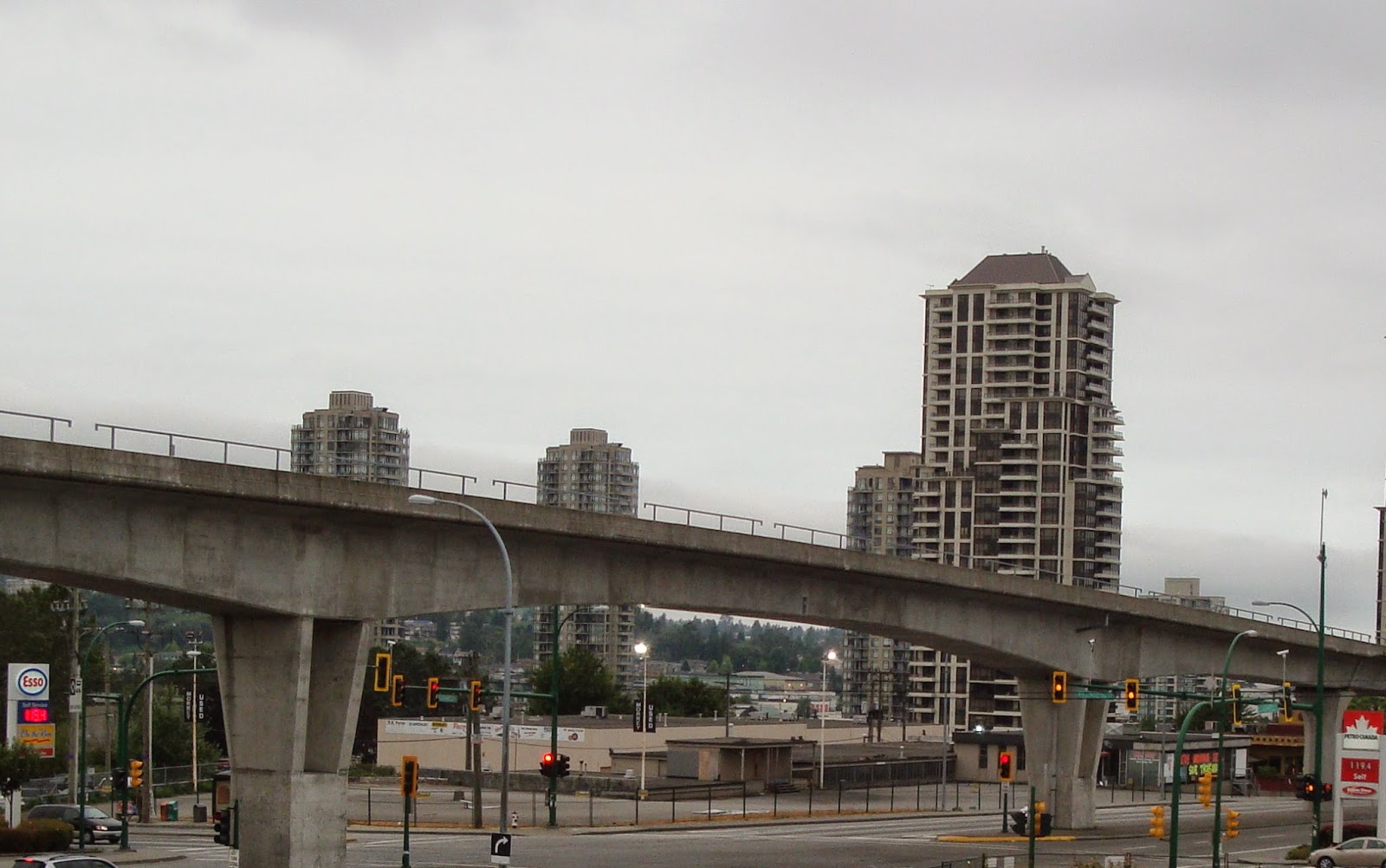 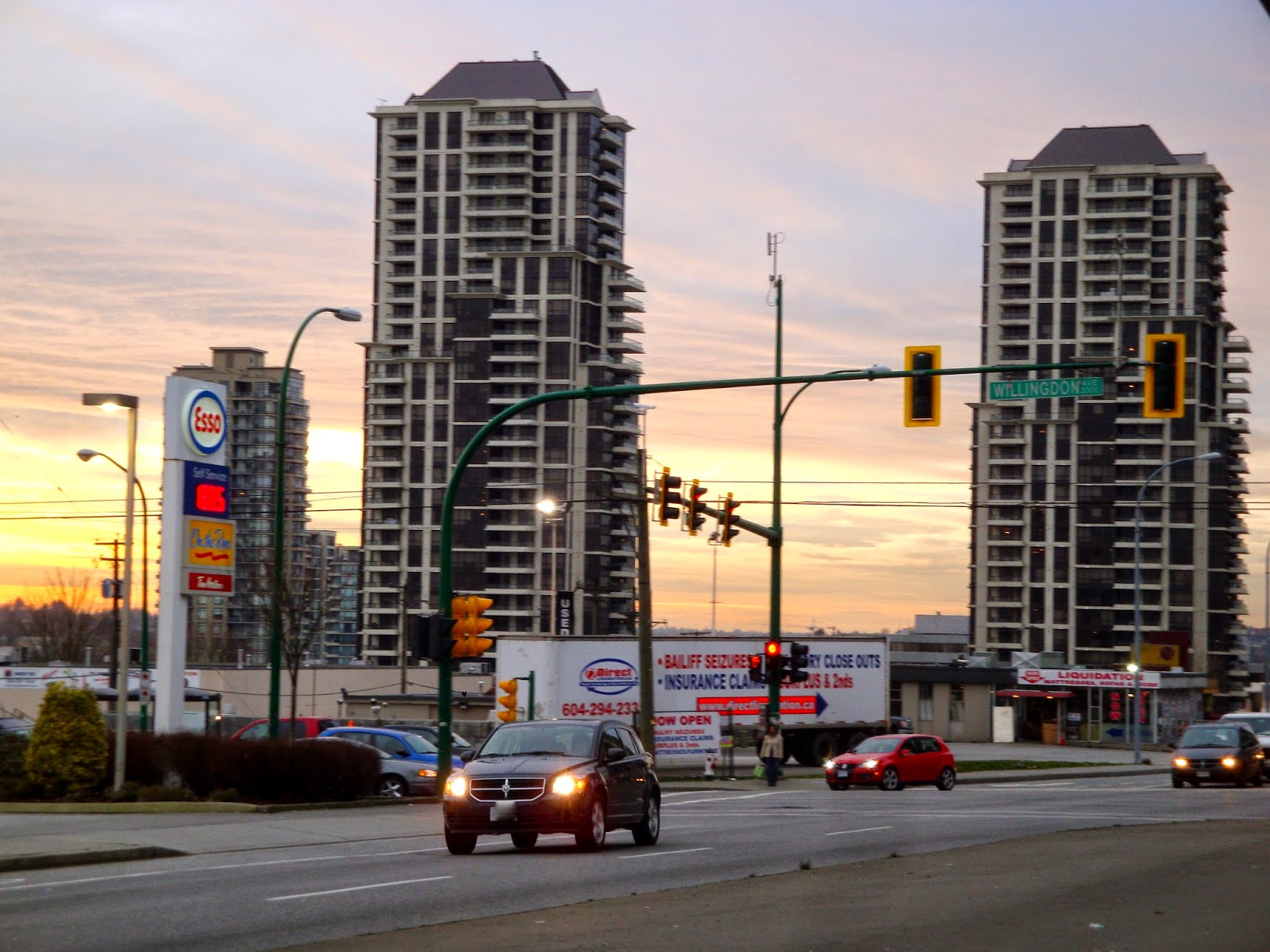 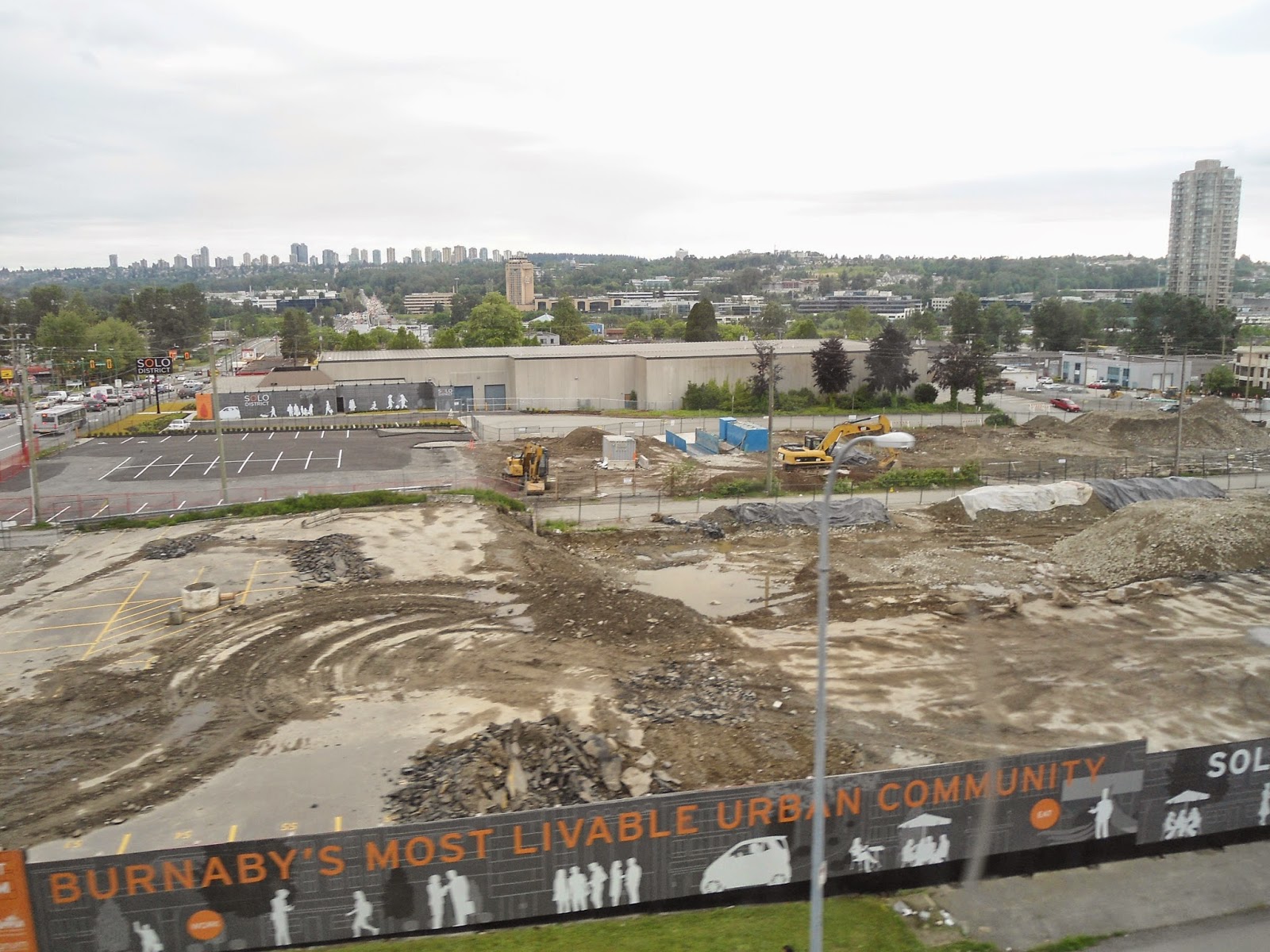 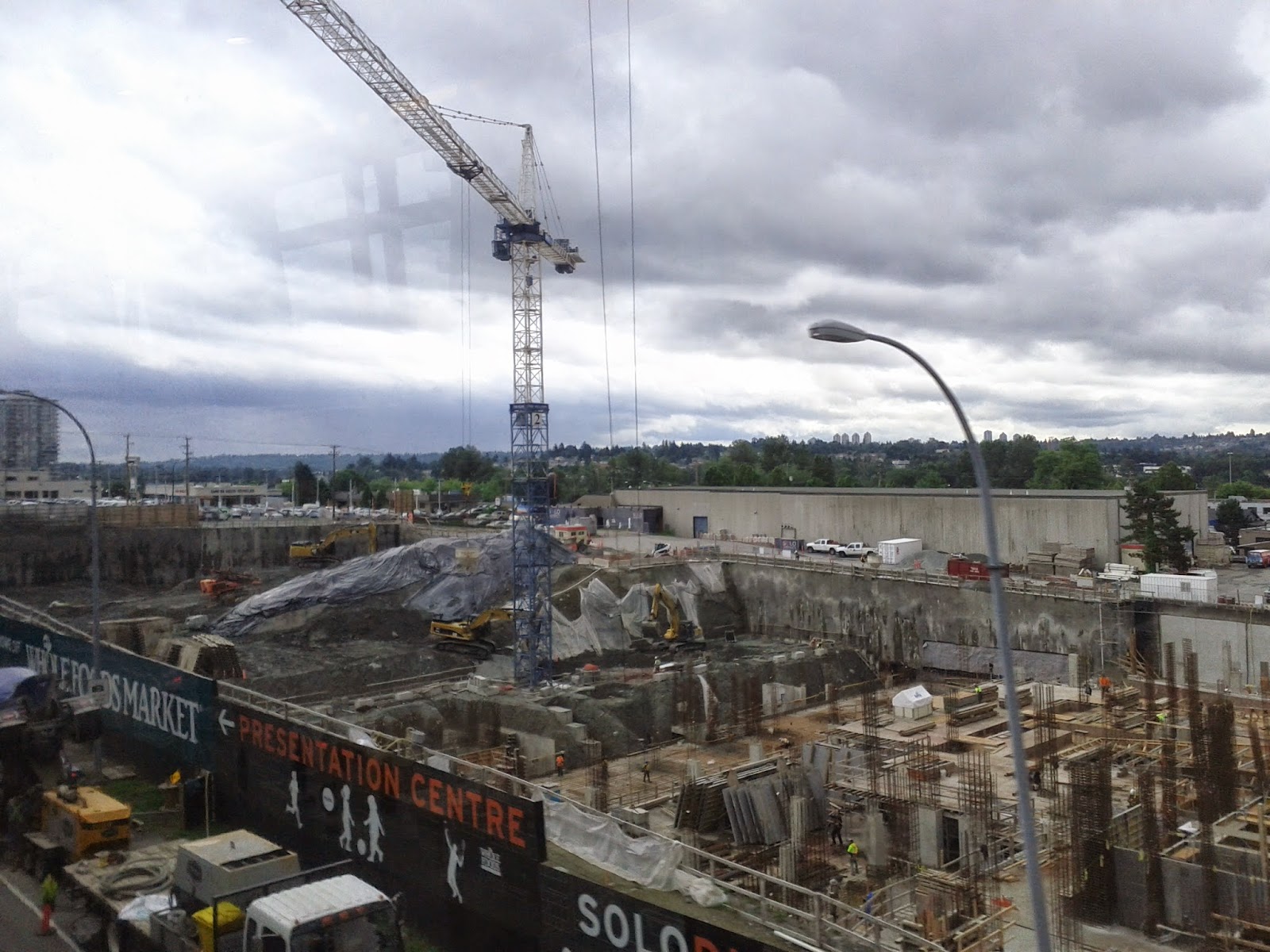 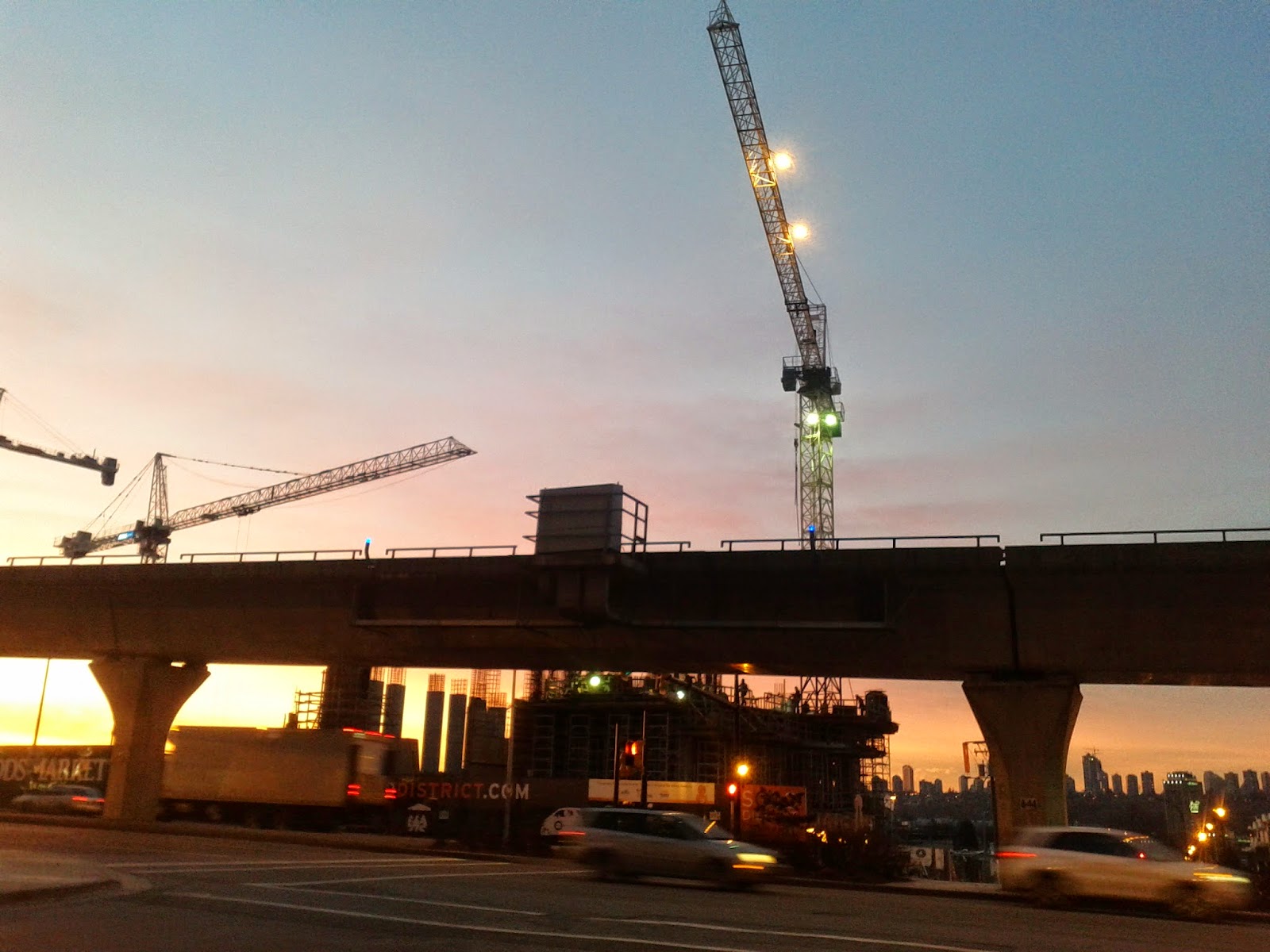 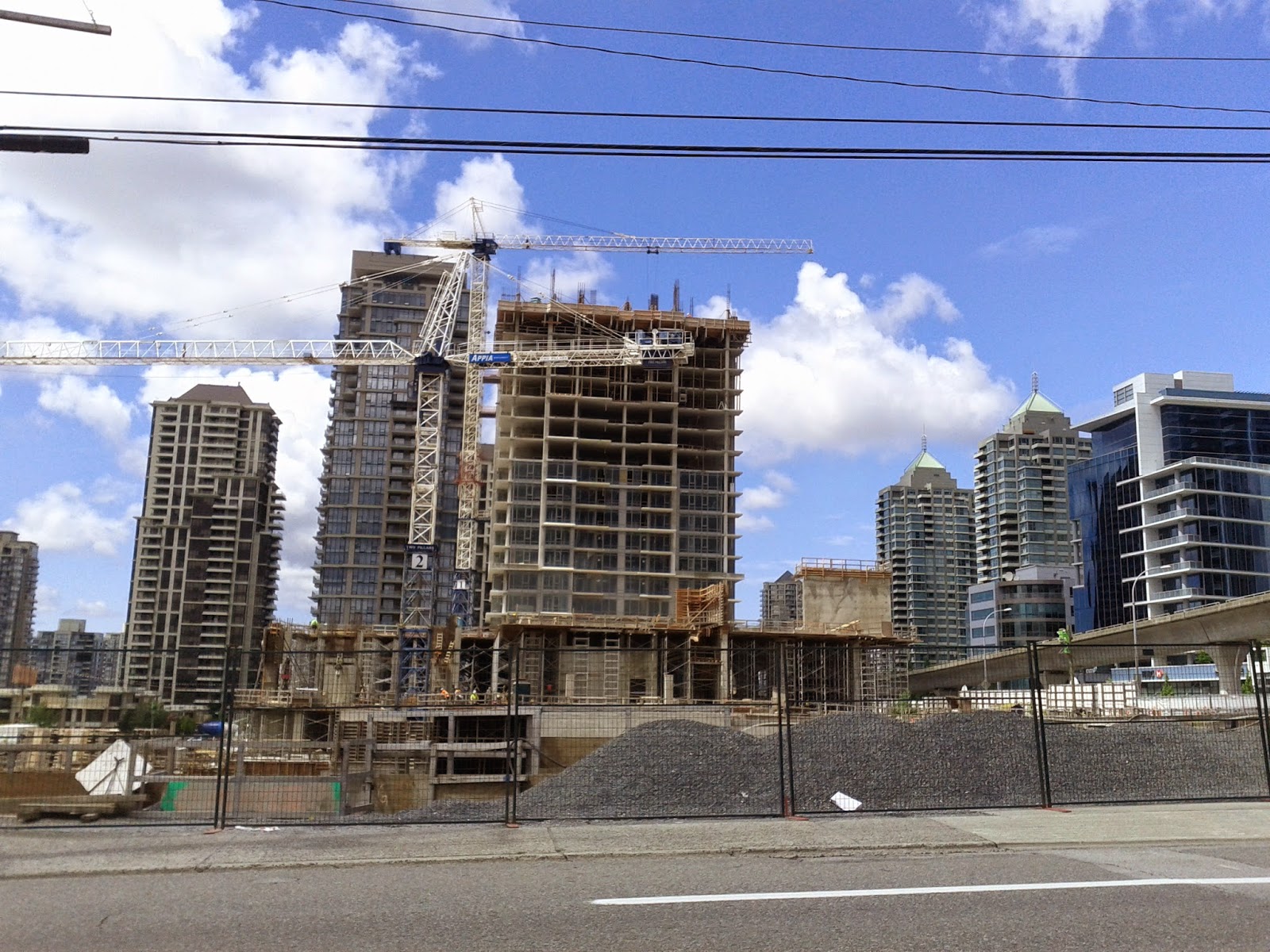 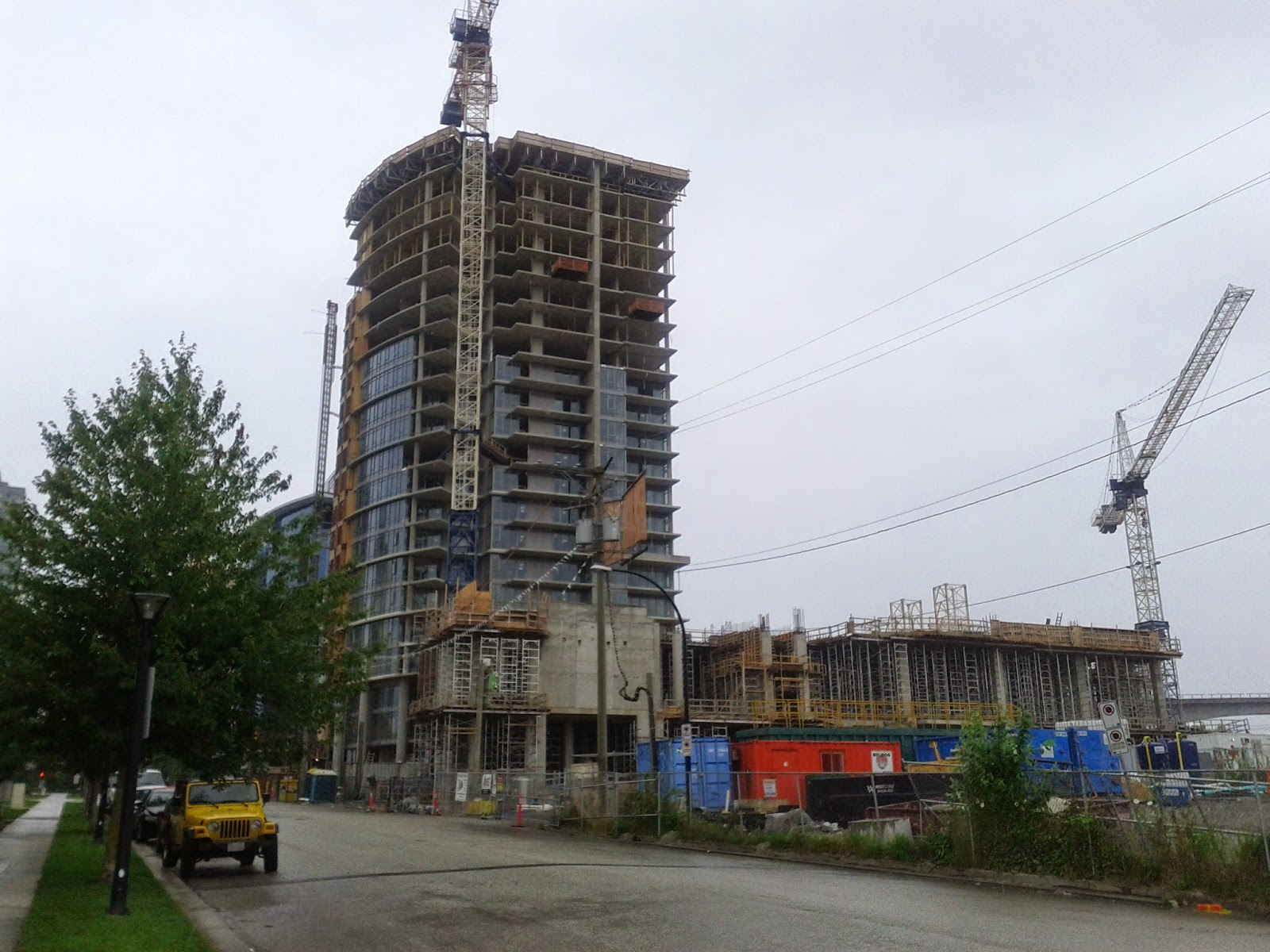 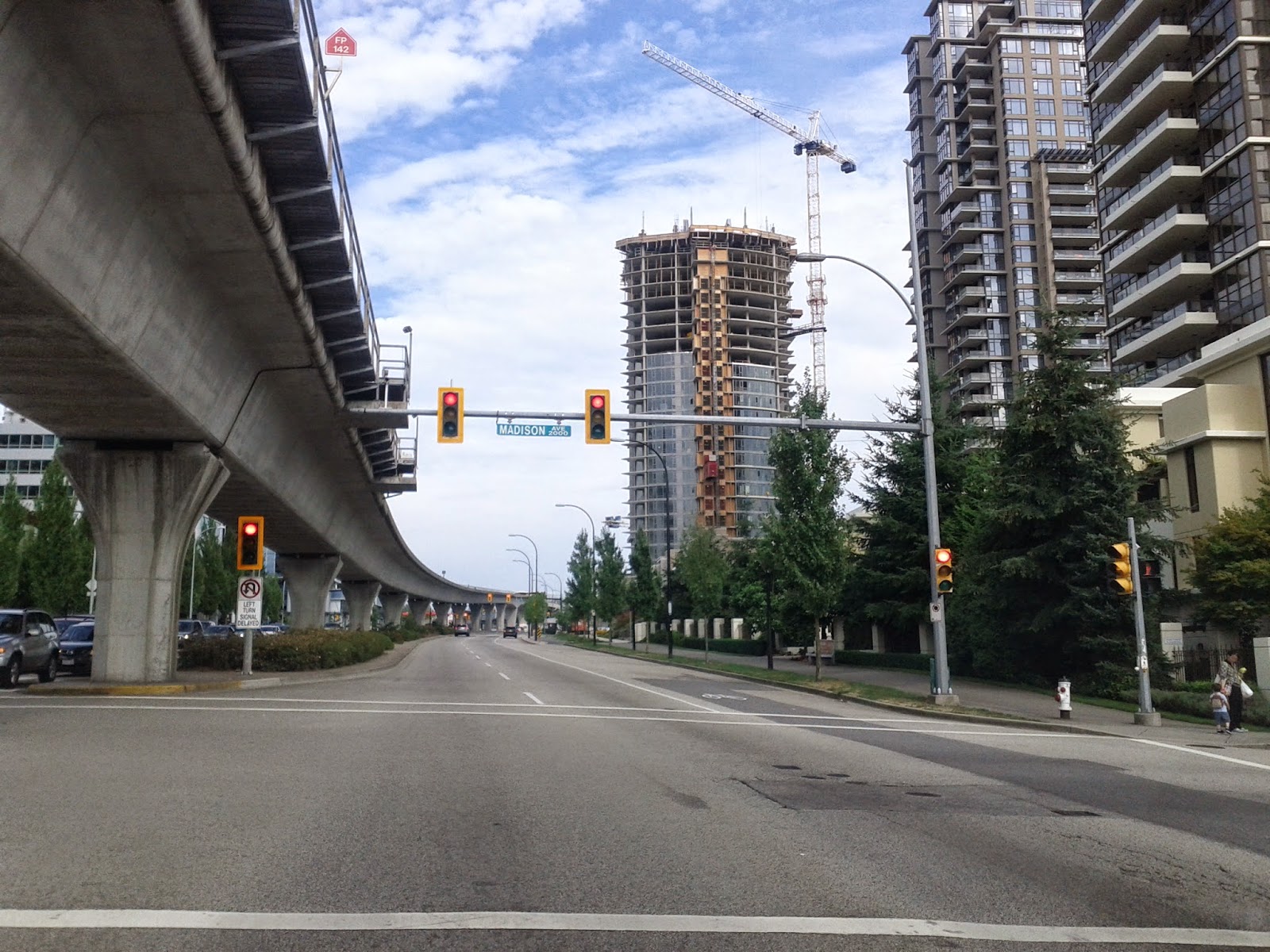 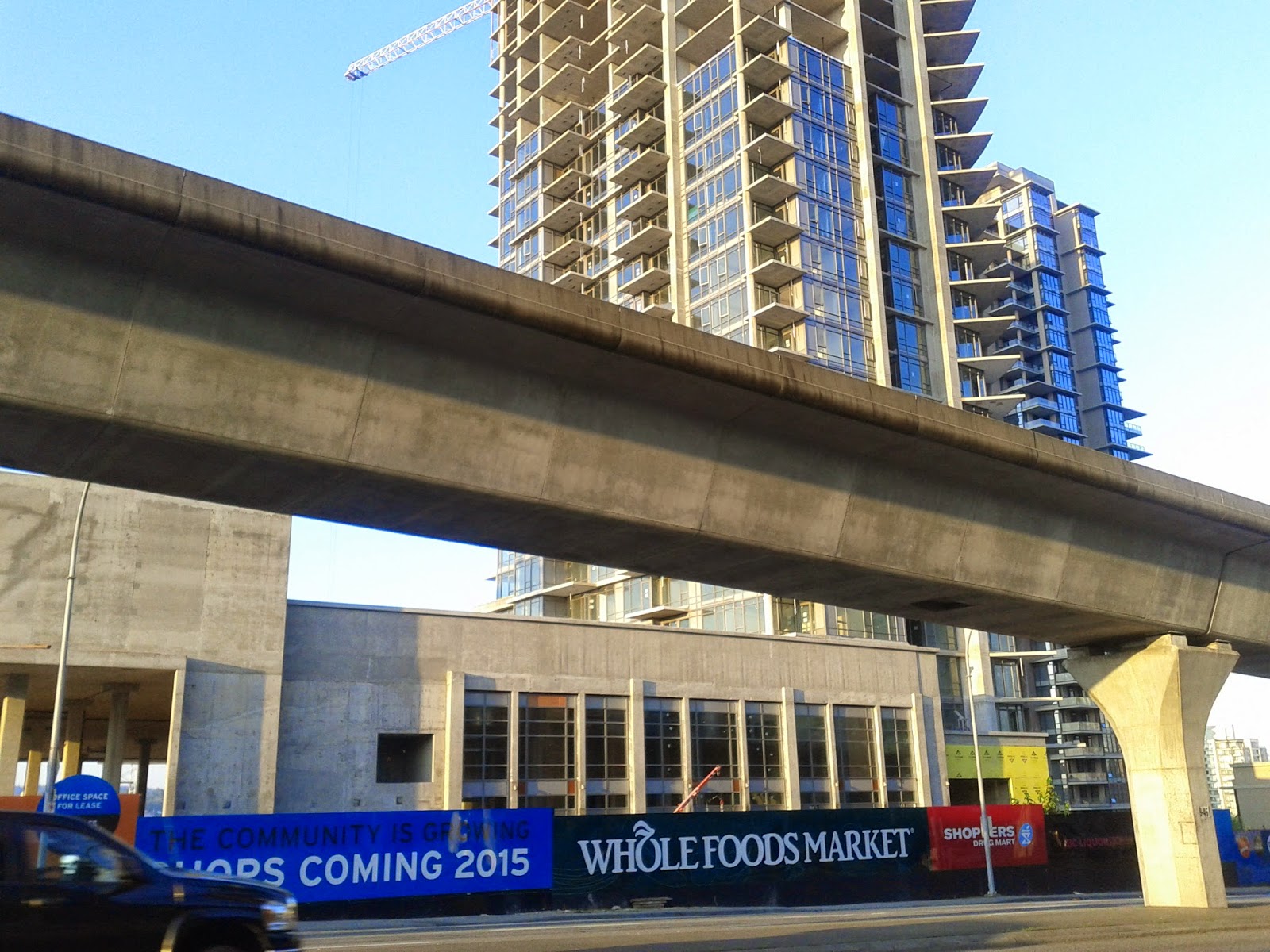 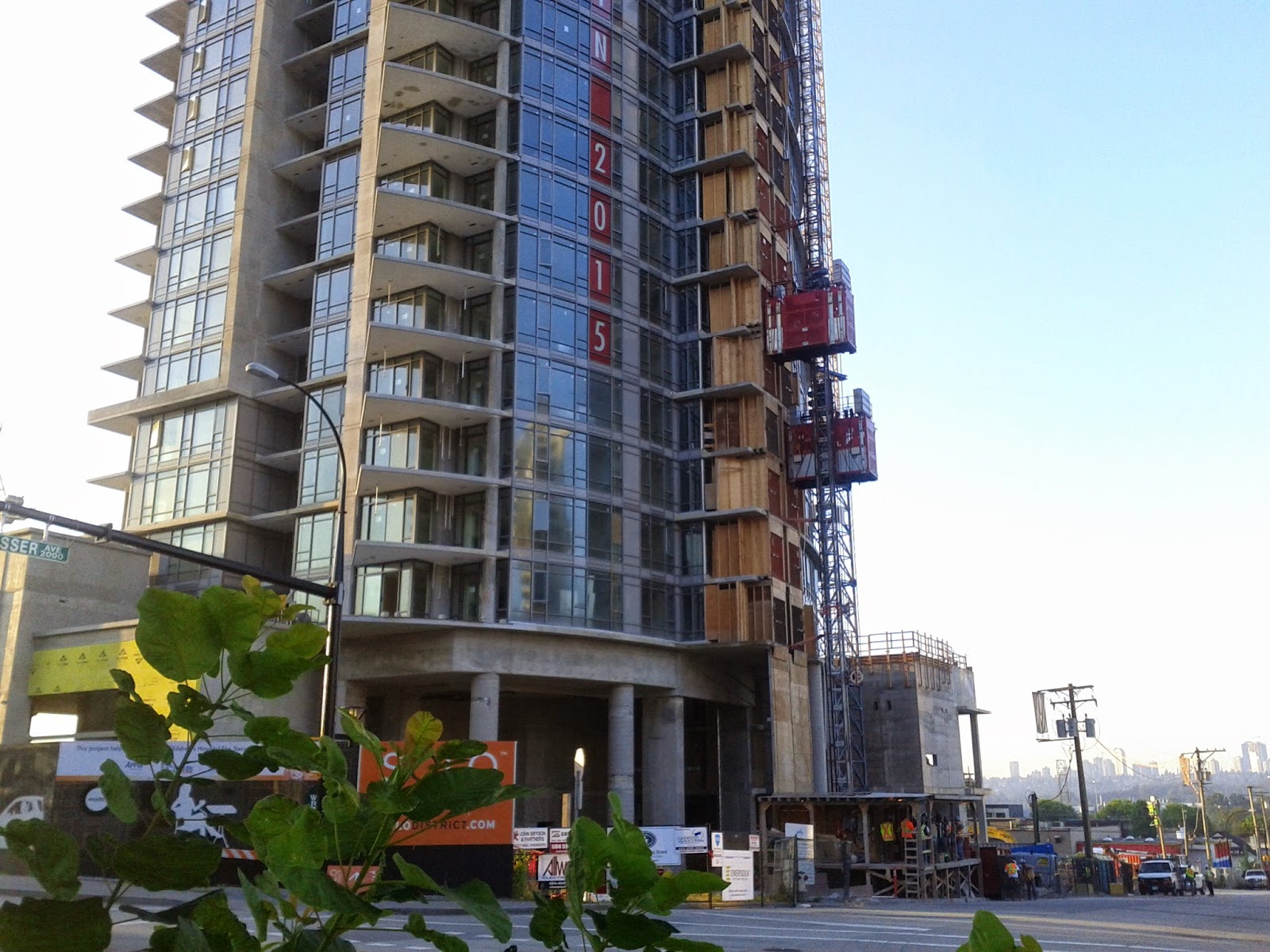 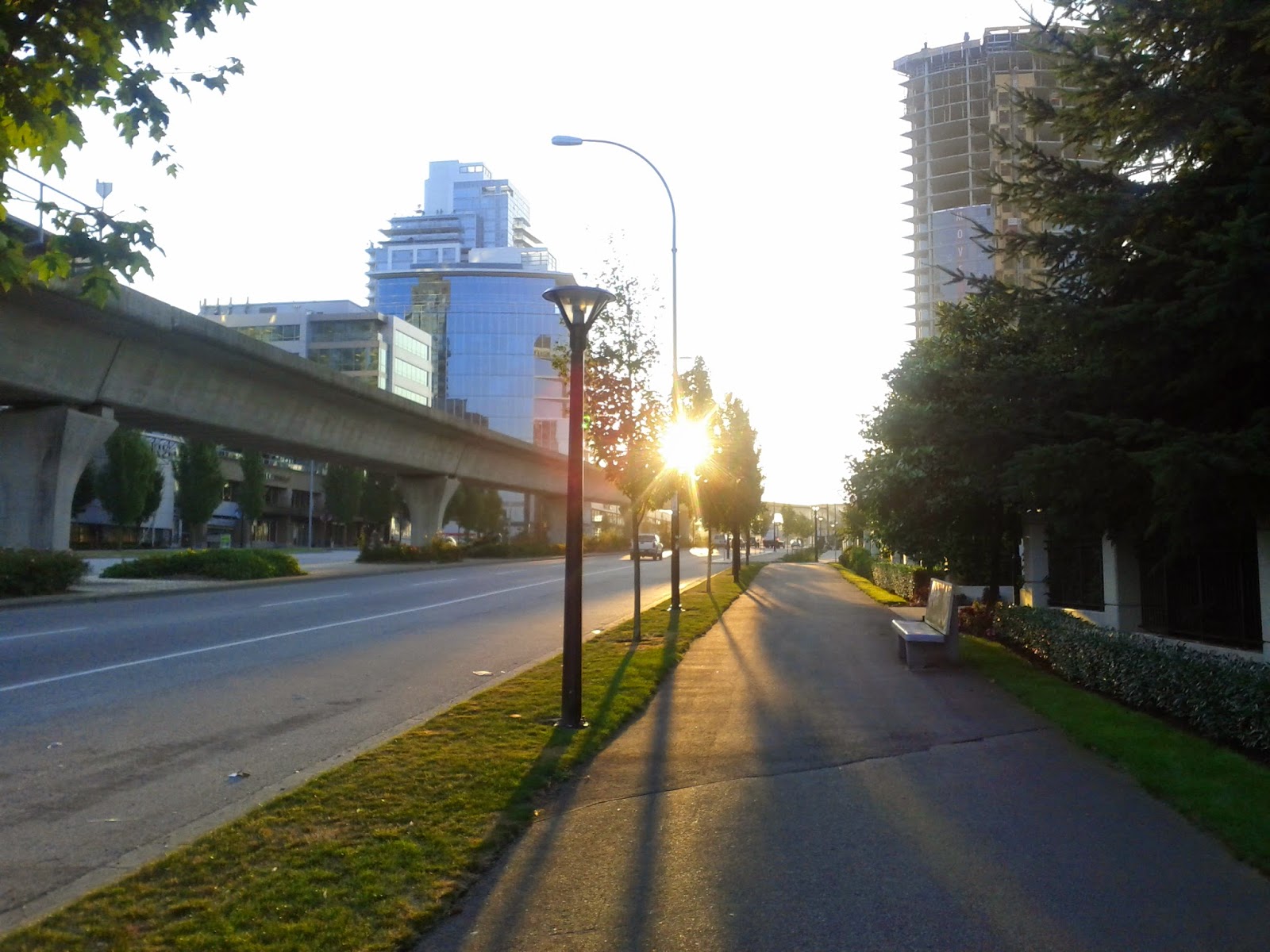 Posted by Brentwood Station at 4:19 PM No comments:

Will struggling Sears stick around for revamped Brentwood?

With Sears seeing serious sales struggles over the past few years, the question begs; will it still be around for the revitalization of Brentwood Town Centre?  The anchor tenant, situated at the eastern end of the mall occupying the 3 floors of the old Eatons, has had a major geographic presence but low sales volumes for a long time.

The store seems to be out of touch with the retail needs of shoppers in 2014.  A quick search in Google News will result in numerous articles about Sears' struggles and about how it is currently exploring selling a majority stake of its shares after having already sold a large portion of its assets last year.

The Metrotown location will see a redevelopment initiated by Sears on the massive site that it owns and occupies there.

If it does move out of Brentwood Mall, what might we see taking up shop in the 3 level space the Sears currently occupies?  That part of the mall site is expected to have a relatively "quieter" commercial square which will likely include a supermarket. 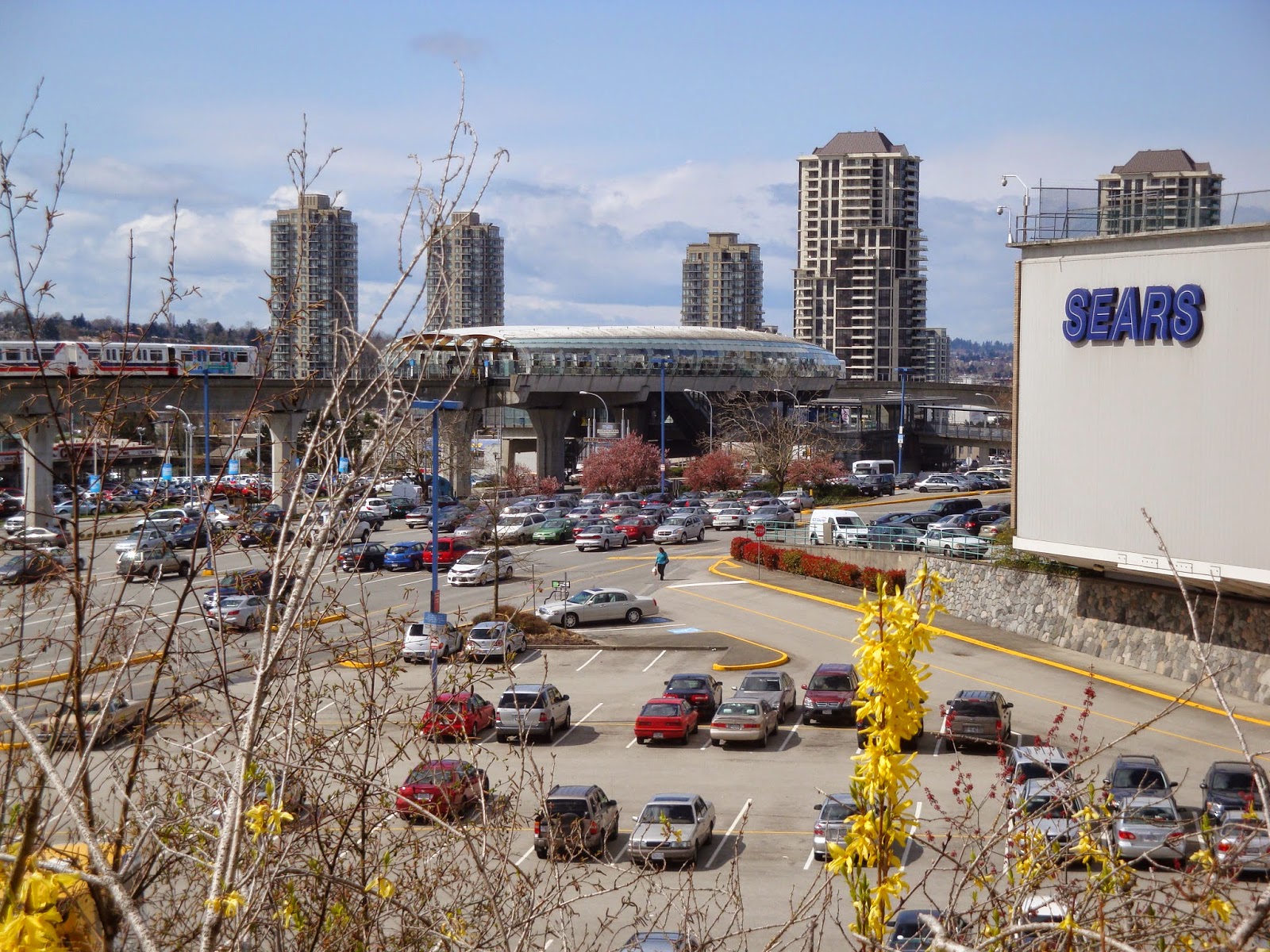 The company blamed the slump partly on a relatively cold spring.

Total revenue fell 12 per cent to $845.8-million, said Sears Canada, whose sales have declined for six straight years.
The company, which traces its Canadian roots back to the early 1950s, has lost market share to aggressive U.S. rivals such as Wal-Mart Stores Inc and Target Corp.
It has eliminated about 3,000 positions since November, closed many stores and sold several of its most valuable leases over the past year, including one for its flagship store at Toronto Eaton Center.
Hedge fund billionaire Eddie Lampert and his Sears Holdings Corp said in May they were looking to sell their 51 per cent stake in Sears Canada.
Buyout firm Sycamore Partners was considering a bid for Sears Canada, New York Post reported this month.
Second-quarter operating loss widened to $64.2-million from $5.3-million a year ago, Sears Canada said.
The company reported a net loss of $21.3-million, or 21 cents per share, compared with a profit of $152.8-million, or $1.50 per share, a year earlier.
The year-ago quarter’s profit included a one-time pretax gain of $185.7-million.

HOFFMAN ESTATES, Ill. - Sears Holdings said Thursday its loss widened significantly in the second quarter and announced it may close additional stores on top of the 130 closures already under way this year.


Sears lost $573 million, or $5.39 per share, during the quarter that ended Aug. 2, nearly three times the loss of $194 million, or $1.83 per diluted share, during the same period last year. Adjusting for one-time items, its loss was $313 million, or $2.87 per diluted share.
It is the ninth consecutive quarter that the once-mighty retailer has reported losses as it attempts to transform itself from a traditional department store into a member-centric shopping service driven by its Shop Your Way rewards program.
Revenues also continued their eight-year tumble, down 10 percent to $8 billion for the quarter from $8.9 billion last year, largely because of the loss of Lands' End business after that company spun off from Sears earlier this year, as well as having fewer Sears and Kmart stores in operation, weak performance in Sears Canada, and a decline in sales in existing stores.
The results missed expectations on Wall Street, where analysts on average had estimated a loss of $2.63 per diluted share and revenue of $8.13 billion.
Efraim Levy, an equity analyst at S&P Capital IQ, said he was disappointed by Sears' estimates that its store closures will lead to $1 billion in sales losses and only $25 million in improved profitability.
"With all the money they are losing, you'd think they have more losses that they could get rid of by closing certain stores," said Levy, who has a strong sell opinion on Sears Holdings shares. In better news, Sears was able to reduce its pension obligations, which frees up cash.
"You won't (see) a profitable Sears on the scale that the company is currently operating. They have to slim down a lot to get back to profitability."
Posted by Brentwood Station at 8:47 PM 2 comments:

The following Burnaby NewsLeader article mentioning the Gilmore Station development by ONNI Group provides a bit of a glimpse into what we might expect there. 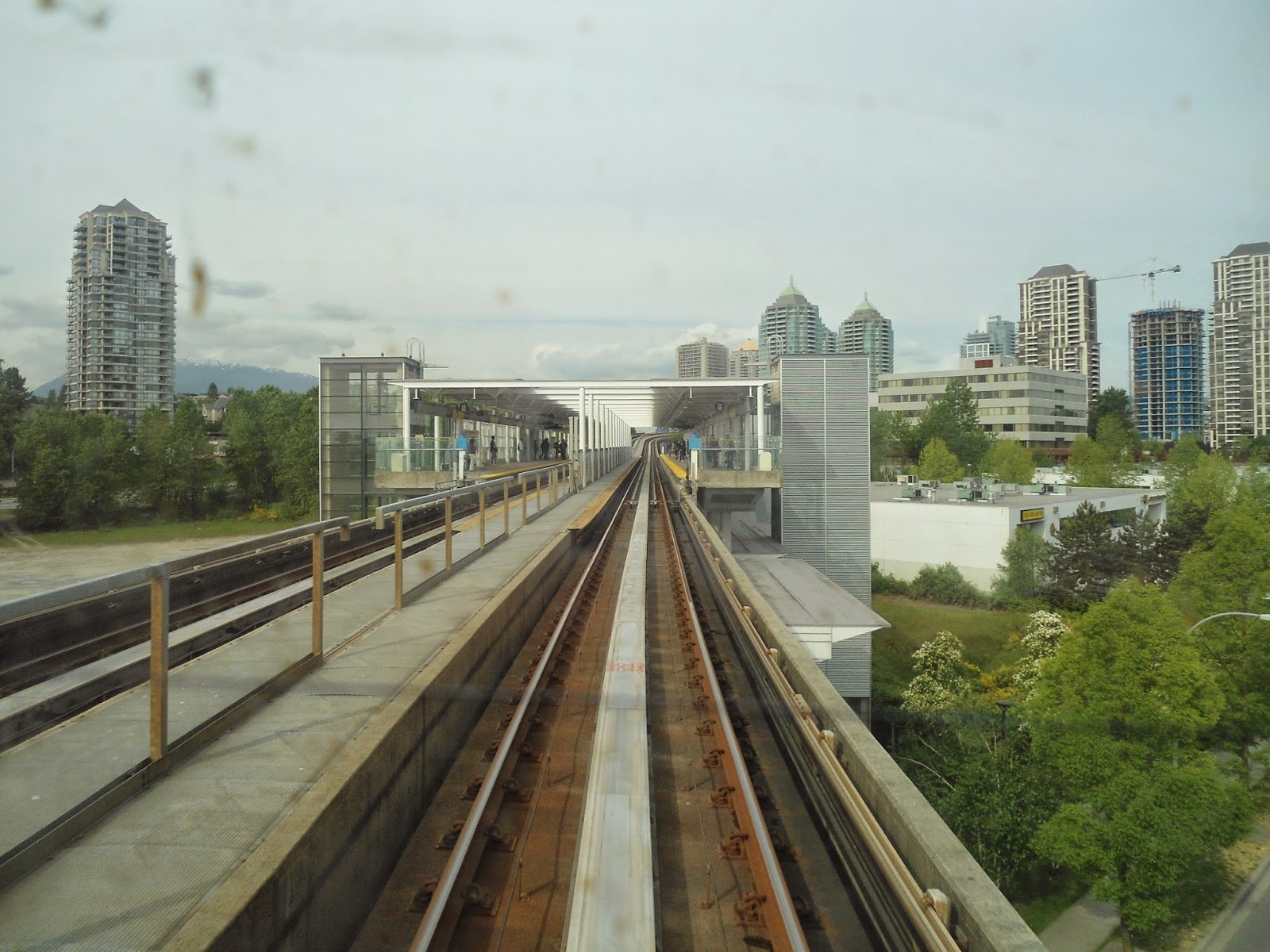 Photo of approach from the west dated 2012


The Onni Group is planning a major redevelopment around the Gilmore SkyTrain station that will turn it into a "gateway" to the Brentwood Town Centre area.

The developer has applied for a rezoning to establish a conceptual master plan and a detailed first phase of development.

A portion is taken up by the Millennium line SkyTrain station built in 2003.

Onni is proposing a highrise , mixed-use residential and commercial development with a substantial office component.

It also proposes building a new public road linking Dawson to Lougheed on the site to improve access to the station and pedestrian-oriented retail on Dawson, said a city staff report.

The Brentwood Town Centre Development Plan adopted by council in 1996 designates the site for high-rise housing and business park development "with a high office use component."


the subject site is one of the few within the region that have the opportunity to be fully integrated with SkyTrain at ground level, mezzanine level and potentially at track level.

In 2002, the former owner of the property, Standard Life Assurance Company, received rezoning approval in principle for a proposed mid- and high-rise office project.

It was to be a new regional office for Standard Life and to include over one million square feet of office space.

It also included a smaller multi-family and mixed use component along Dawson.

But the rezoning never moved forward to final approvals “with the applicant citing changes in the office market which made the proposal no longer economically feasible,” the report said.

Between 2004 and 2010 Standard Life tried to amend the redevelopment concept but one suitable to be forwarded to council never materialized.

The company sold the site to Onni last year.

The aim is to create  a “mixed-use gateway” into Brentwood Town centre that’s been long expected, the report said.

"While Burnaby has become a model for transit oriented development, including the Master Plan concepts for Brentwood and Lougheed Malls, the subject site is one of few within the region that have the opportunity to be fully integrated with SkyTrain at ground level, mezzanine level and potentially at track level, providing unprecedented access to transit by residents, employees, patrons and the surrounding community," it said.

"With this opportunity in mind, the Gilmore SkyTrain Station was purposefully scaled back in its form and materiality, so that in the future it could be fully integrated with surrounding development."

Burnaby’s planning department will work with Onni on a concept and Phase 1 development plan.
When it’s complete, it will go to a future public hearing.
Posted by Brentwood Station at 6:27 PM No comments:

Tough times ahead for drivers on Lougheed

The following notice has been published in the local newspapers regarding work along Lougheed Hwy beginning soon and continuing through to the spring of 2015. 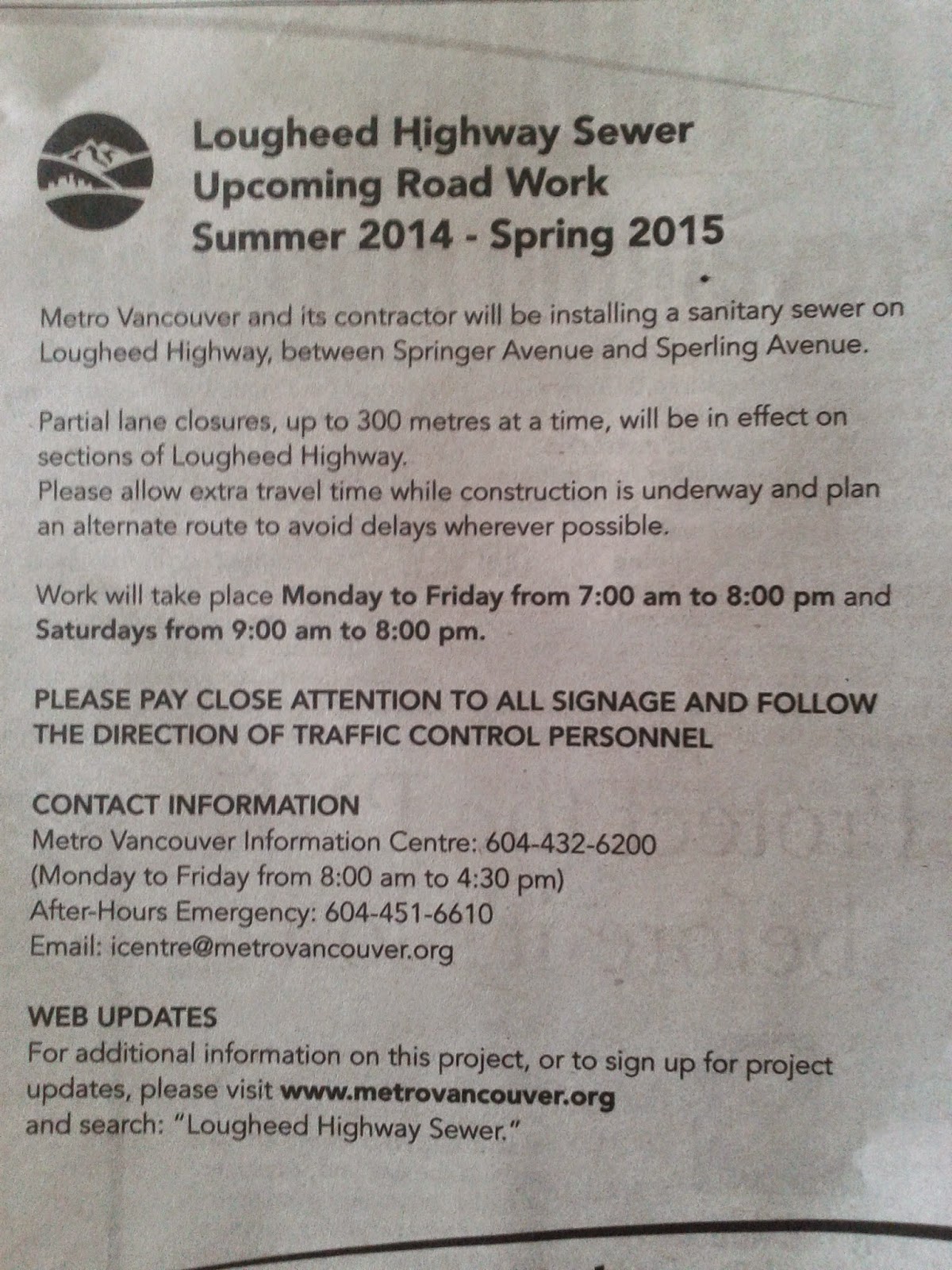 Posted by Brentwood Station at 12:24 PM No comments:

Prep for excavation begins at Brentwood

Pavement is being stripped away to set up the excavation that will kick off construction of Phase 1 of the Brentwood Mall Redevelopment. 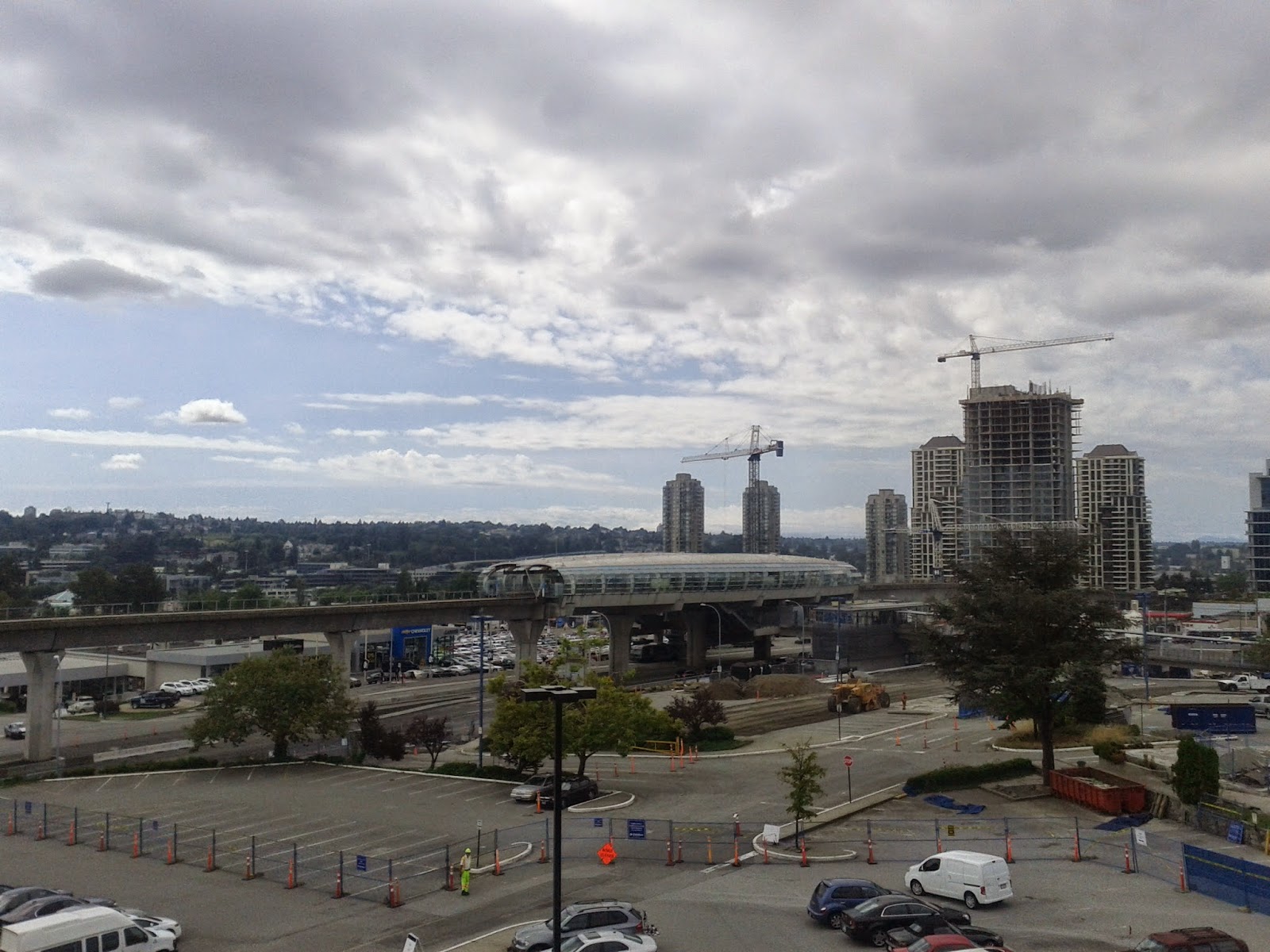 Posted by Brentwood Station at 2:52 PM No comments:

This morning I noticed that access to Brentwood Station from the mall parking lot has been closed off.  Attendants were out in full force this morning to inform pedestrians that access to the station is available only from Lougheed Hwy. 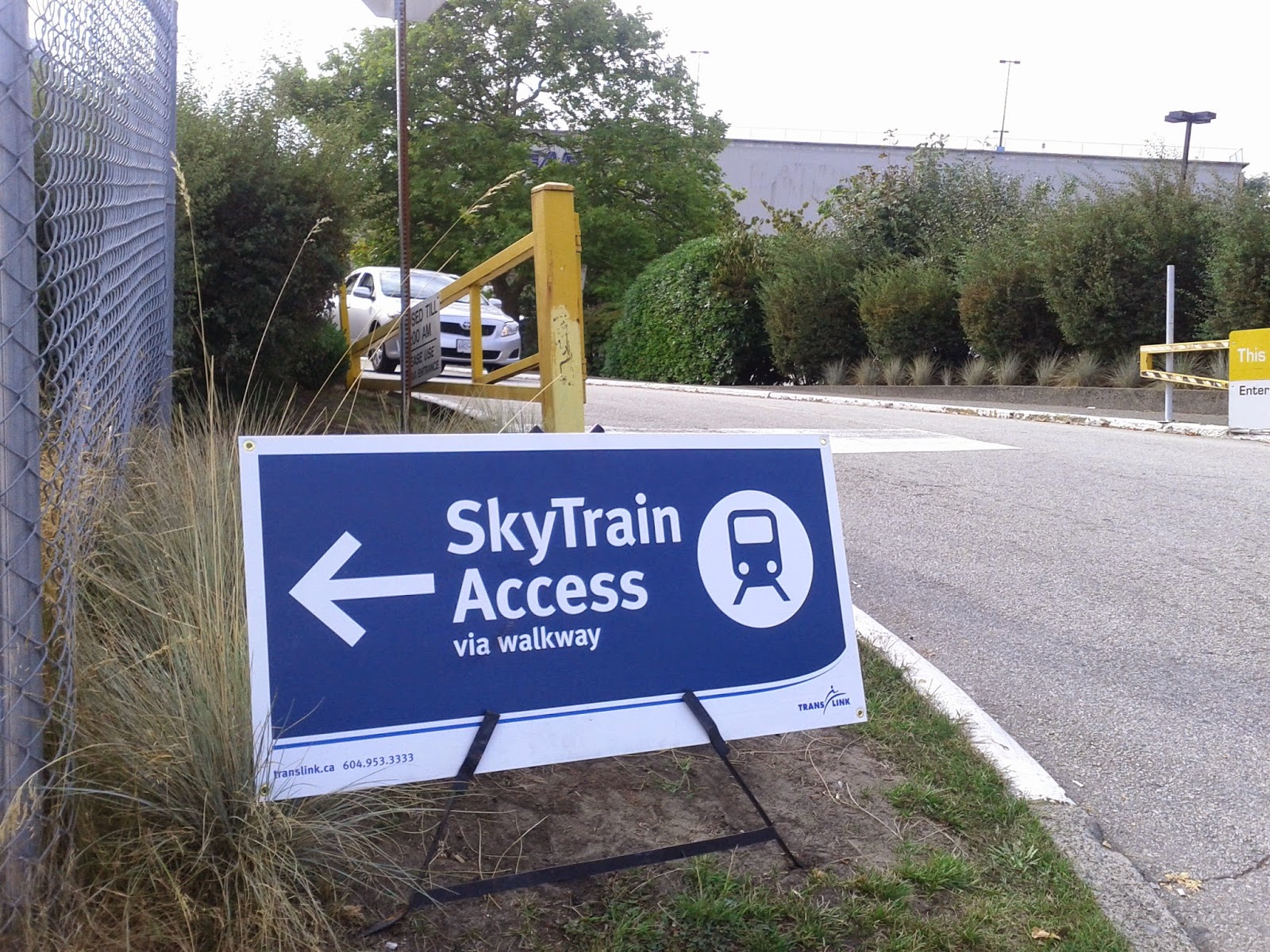 One can see machinery on either side of the ramp that leads to the station. 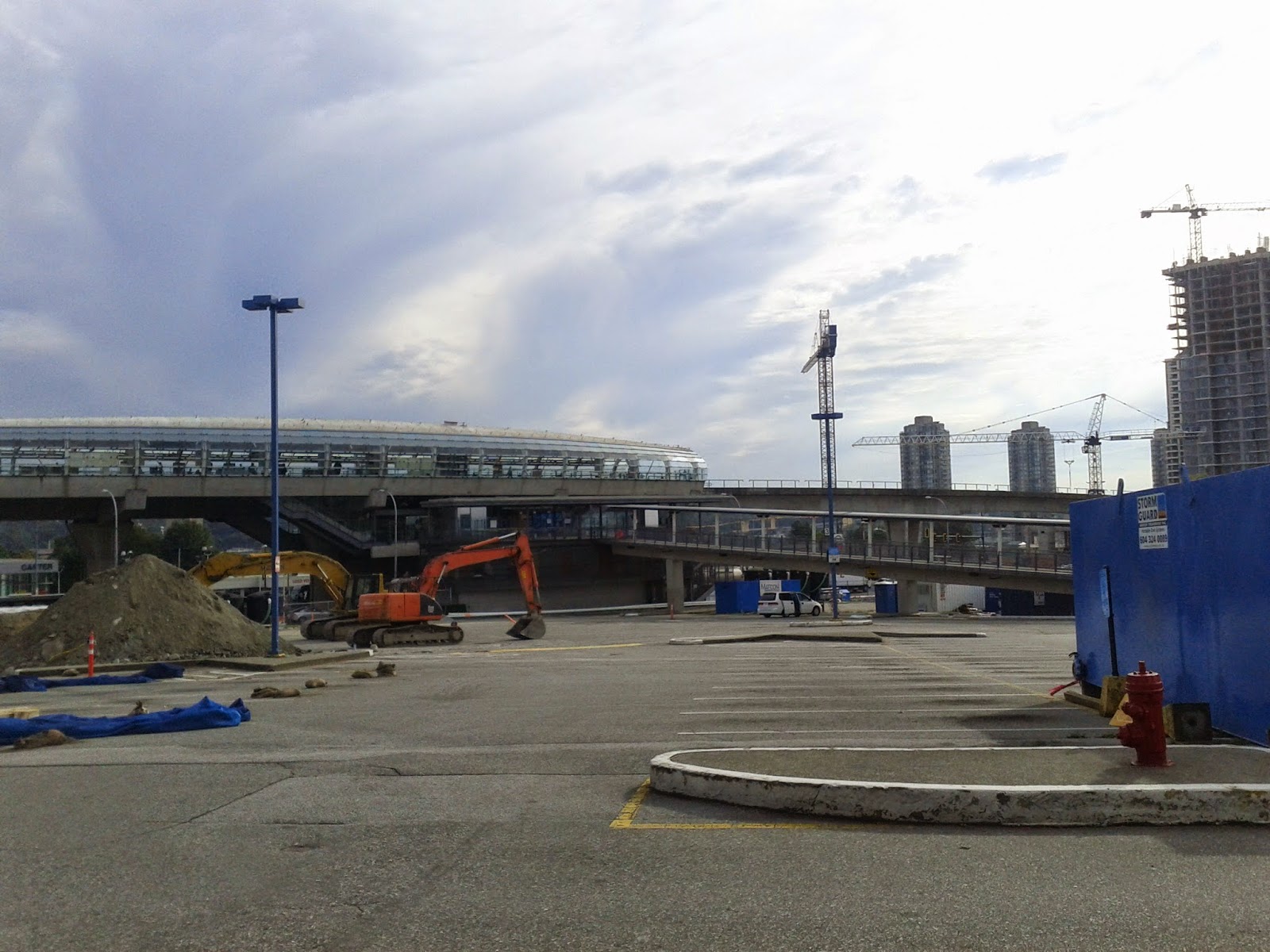 Furthermore, the Halifax and Alpha entrances to the Mall have also been closed to vehicles and pedestrians. 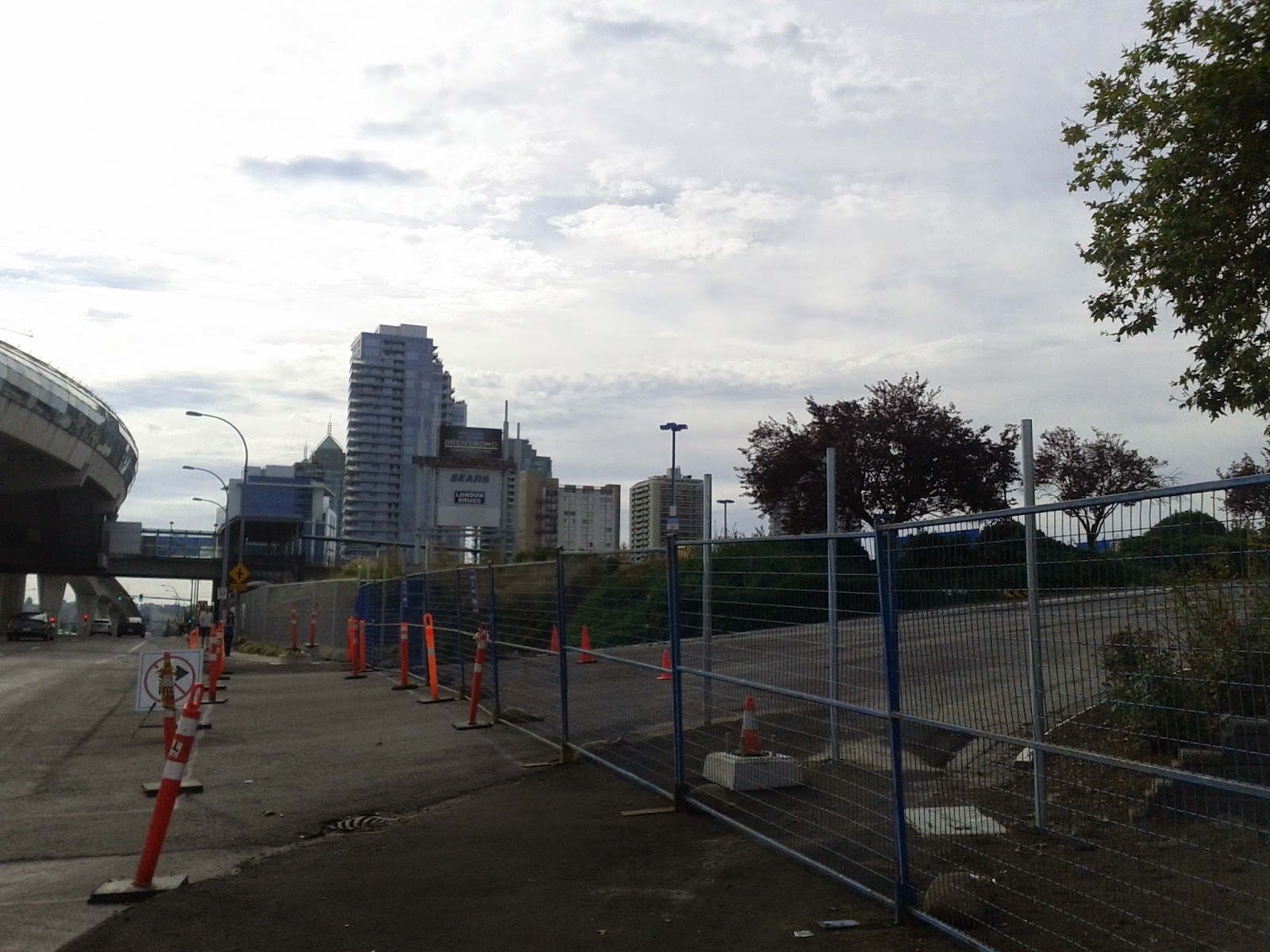 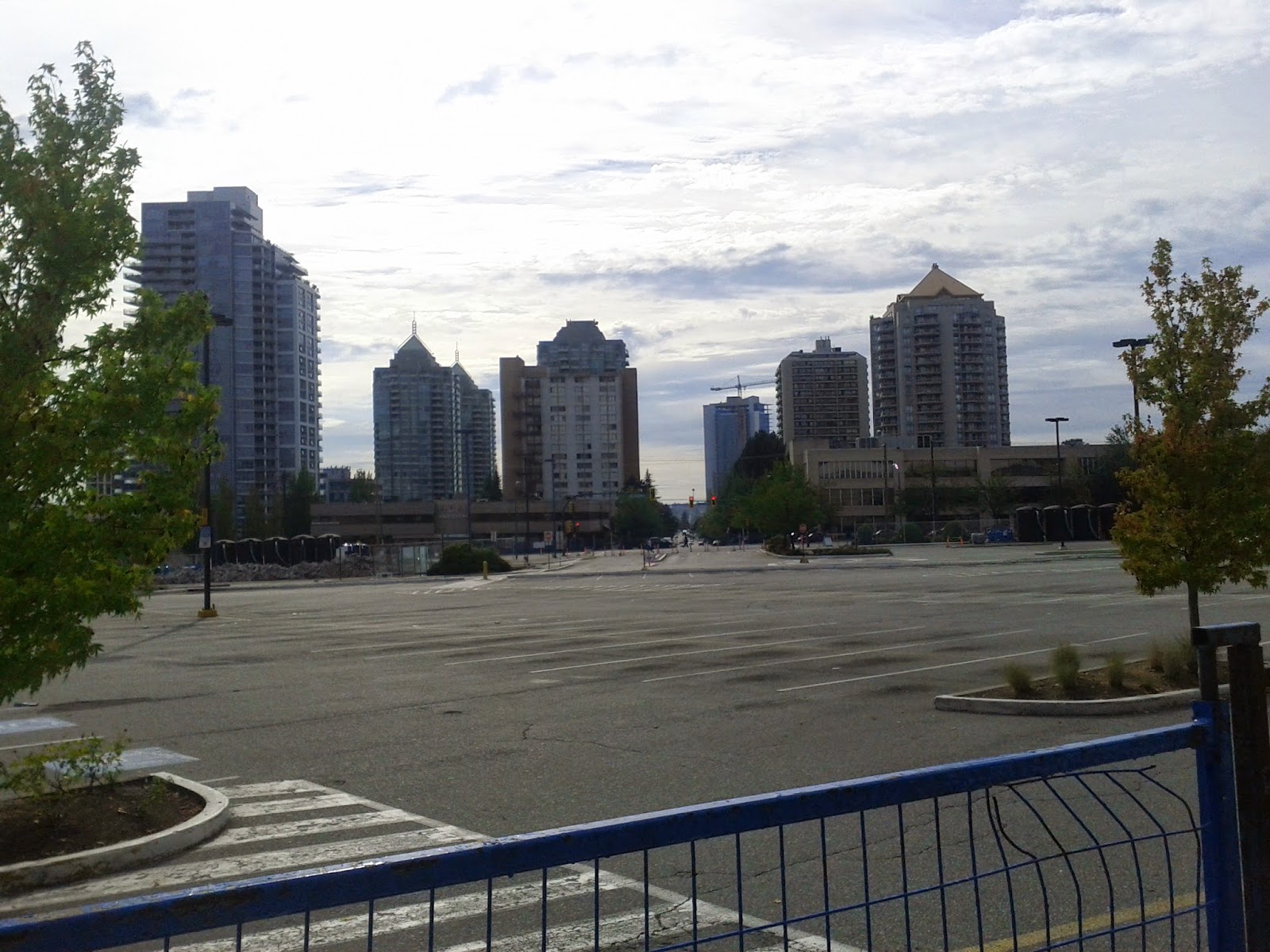 The Brentwood Mall website has the following map showing the available entrances to the Mall site: 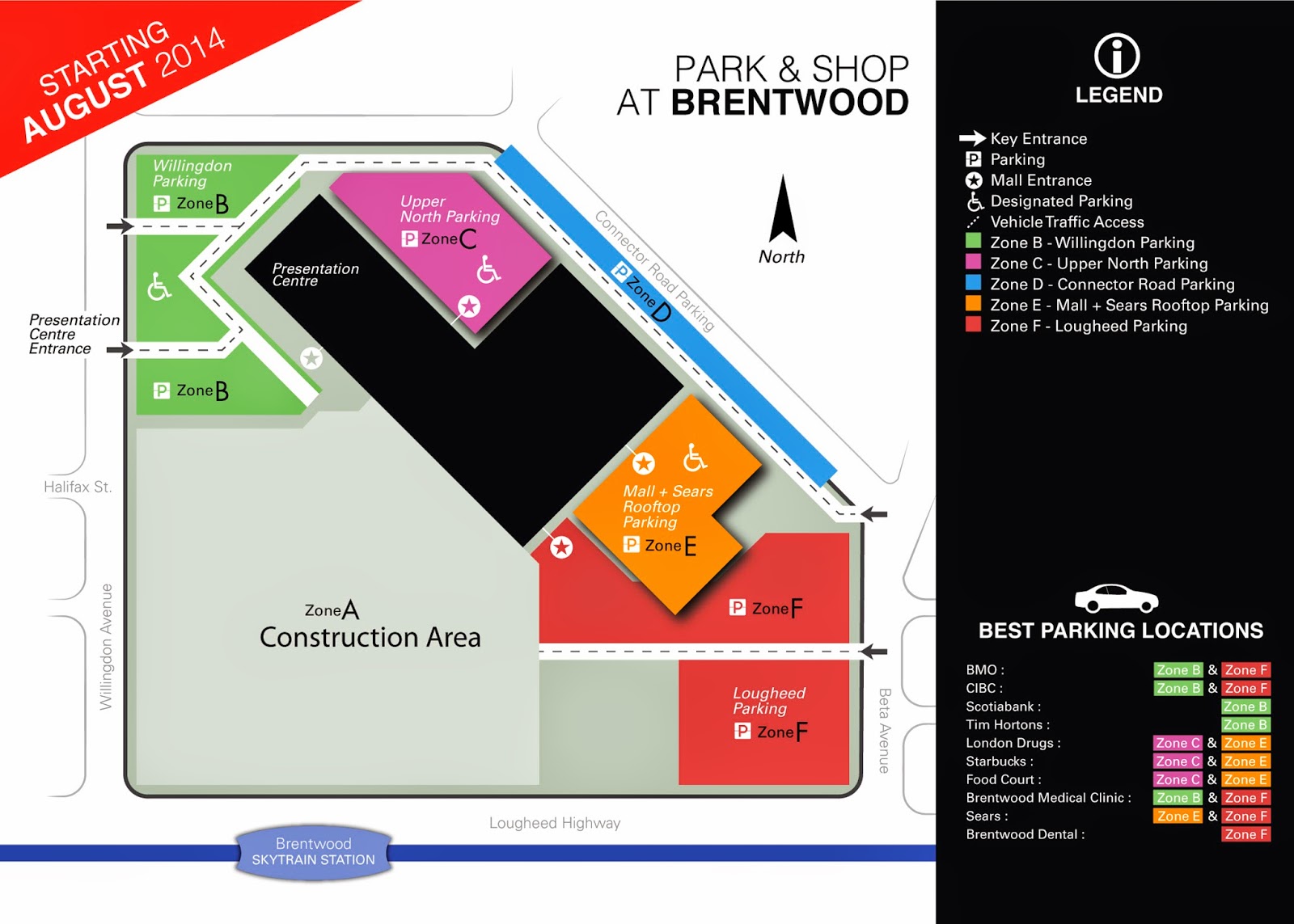 The only accesses are just north of Halifax between Halifax and Brentlawn and the existing entrances on Beta Ave.

Speaking of entrances, in addition to the future light-controlled intersection at Alpha and Lougheed, it appears that a new tunnelled entrance is in the works.  A section just east of Alpha has been marked off with rounded sidewalk corners on either side of what appears to be a future tunnel entrance into the mall site. 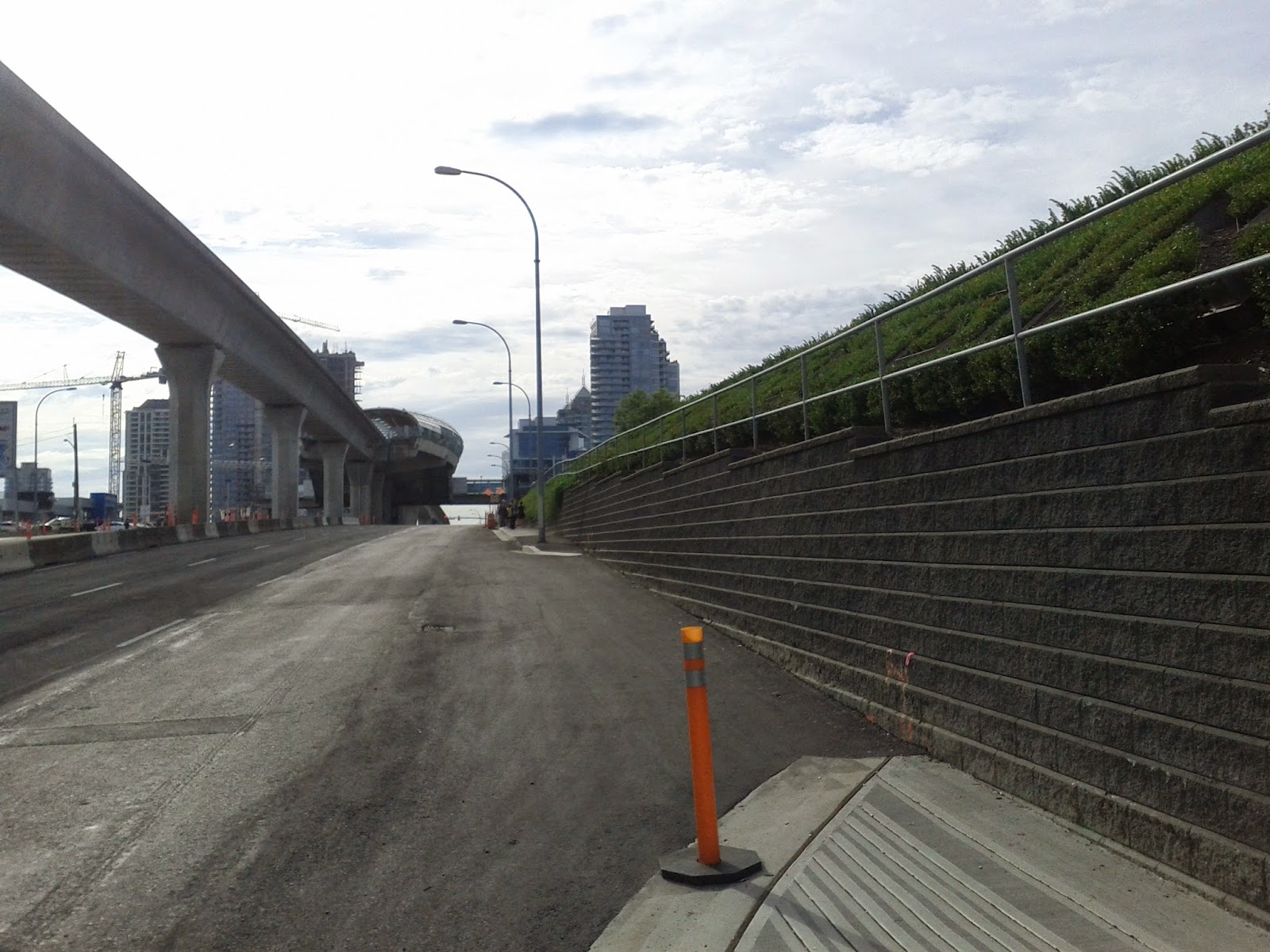 The tunnel will enter there and, according to markings on the surface of the parking lot east of the closed Alpha entrance, the tunnel will proceed west towards the plaza area past the current site of the McDonald's/BMO storefront.
Posted by Brentwood Station at 5:00 PM No comments:

4-way stop at Beta and Brentlawn

Within 2 weeks of the City of Burnaby approving the recommendation by the Traffic Safety Committee, a 4-way stop was installed on Brentlawn Drive yesterday.  The efforts of Brentlawn Drive resident Matthew Senf were instrumental in getting this latest safety improvement.
Posted by Brentwood Station at 5:53 AM 4 comments:

The dismantling of the Brentwood Bus Loop began yesterday.  By today few remnants of it exist at Willingdon and Halifax. 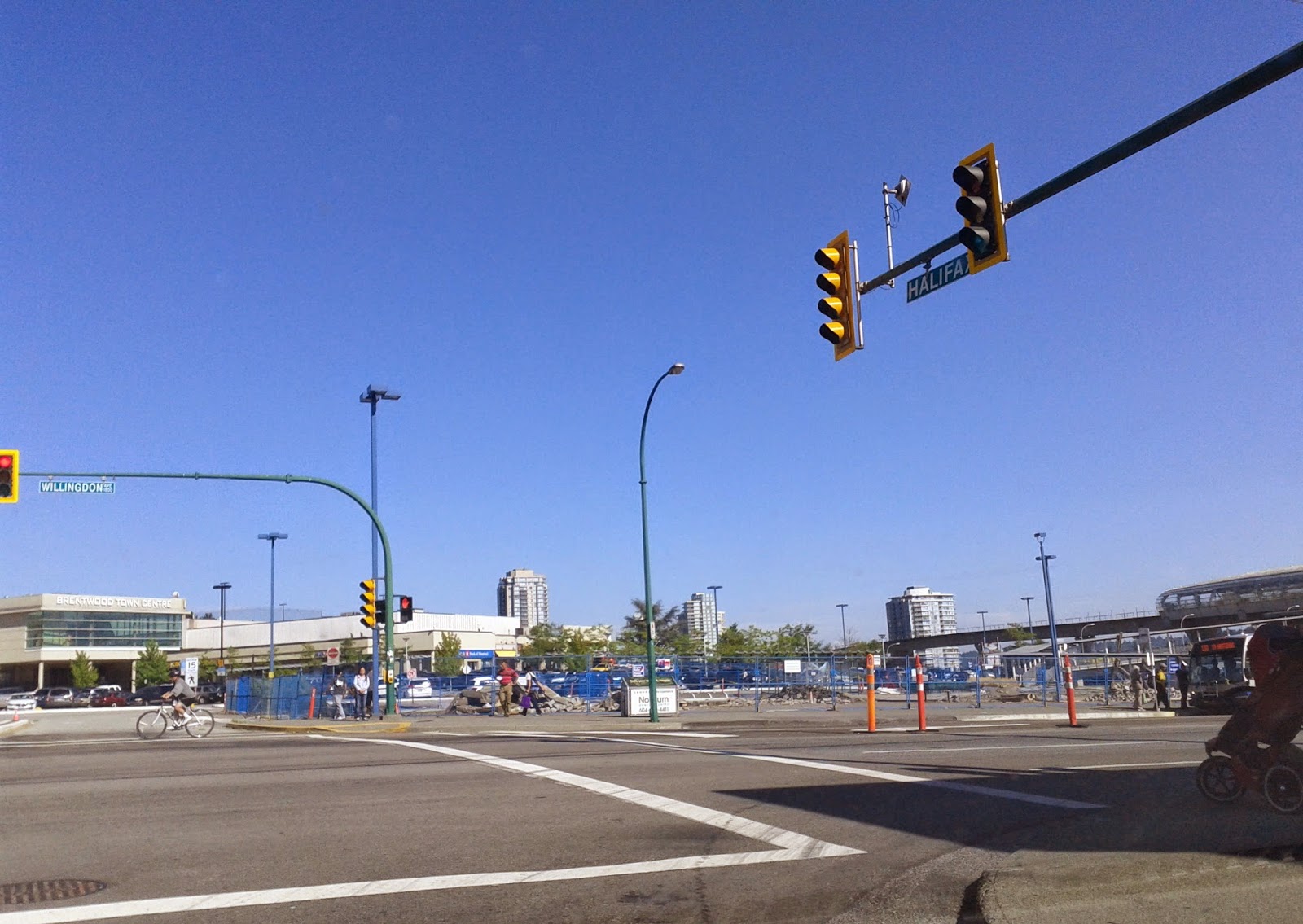 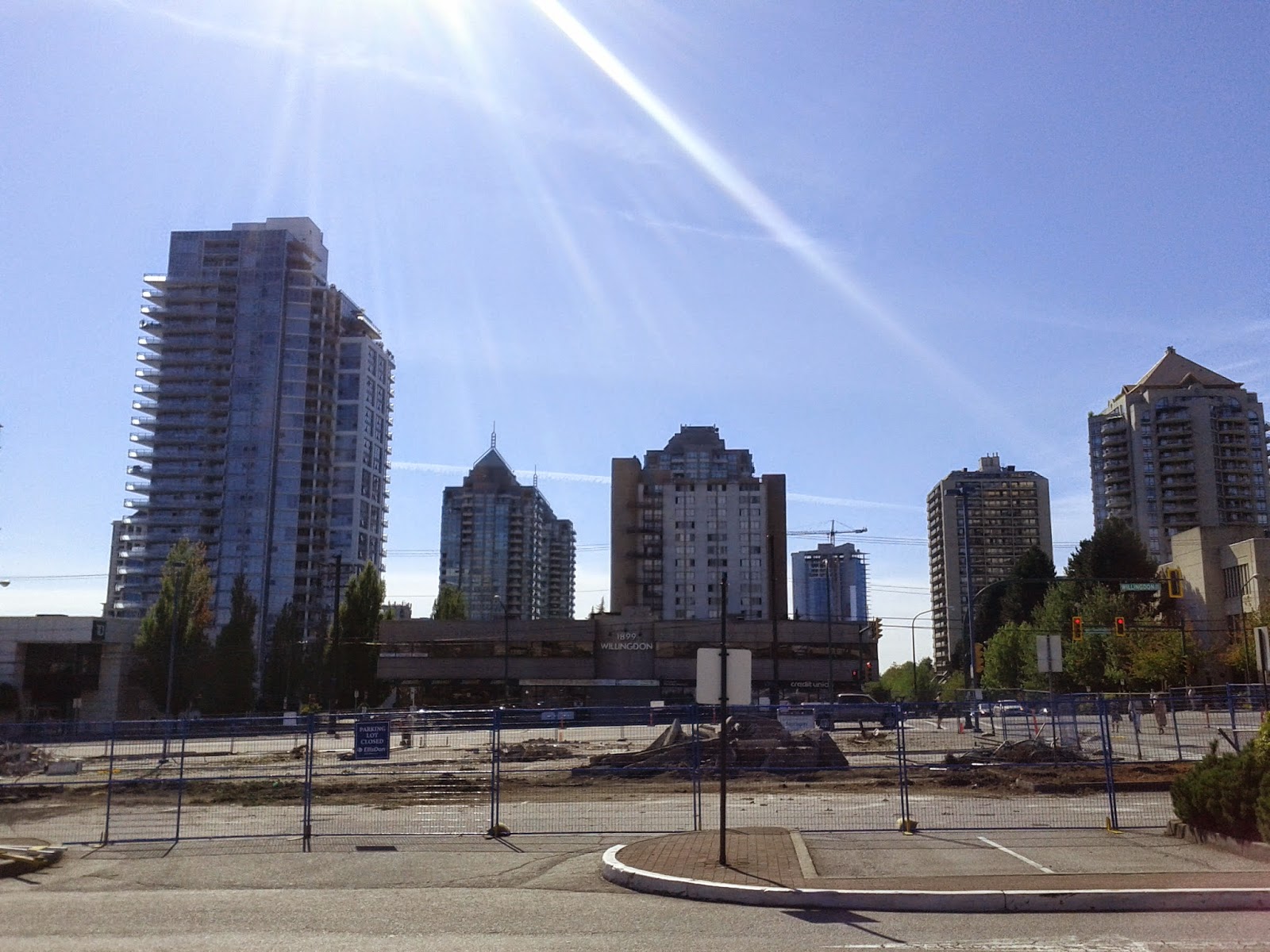 Posted by Brentwood Station at 5:36 PM No comments:

Although the Brentwood bus loop closed earlier this year, you could still see people having a rest at the benches there.  That was until  a few days ago when the entire area from Halifax Street along Willingdon to Brentwood Station was fenced off into 1 large site in preparation for the removal of the old bus loop structure and for its excavation.  That site will see Brentwood One and the massive Entertainment Plaza take shape as part of Phase One of the Brentwood Mall Redevelopment. 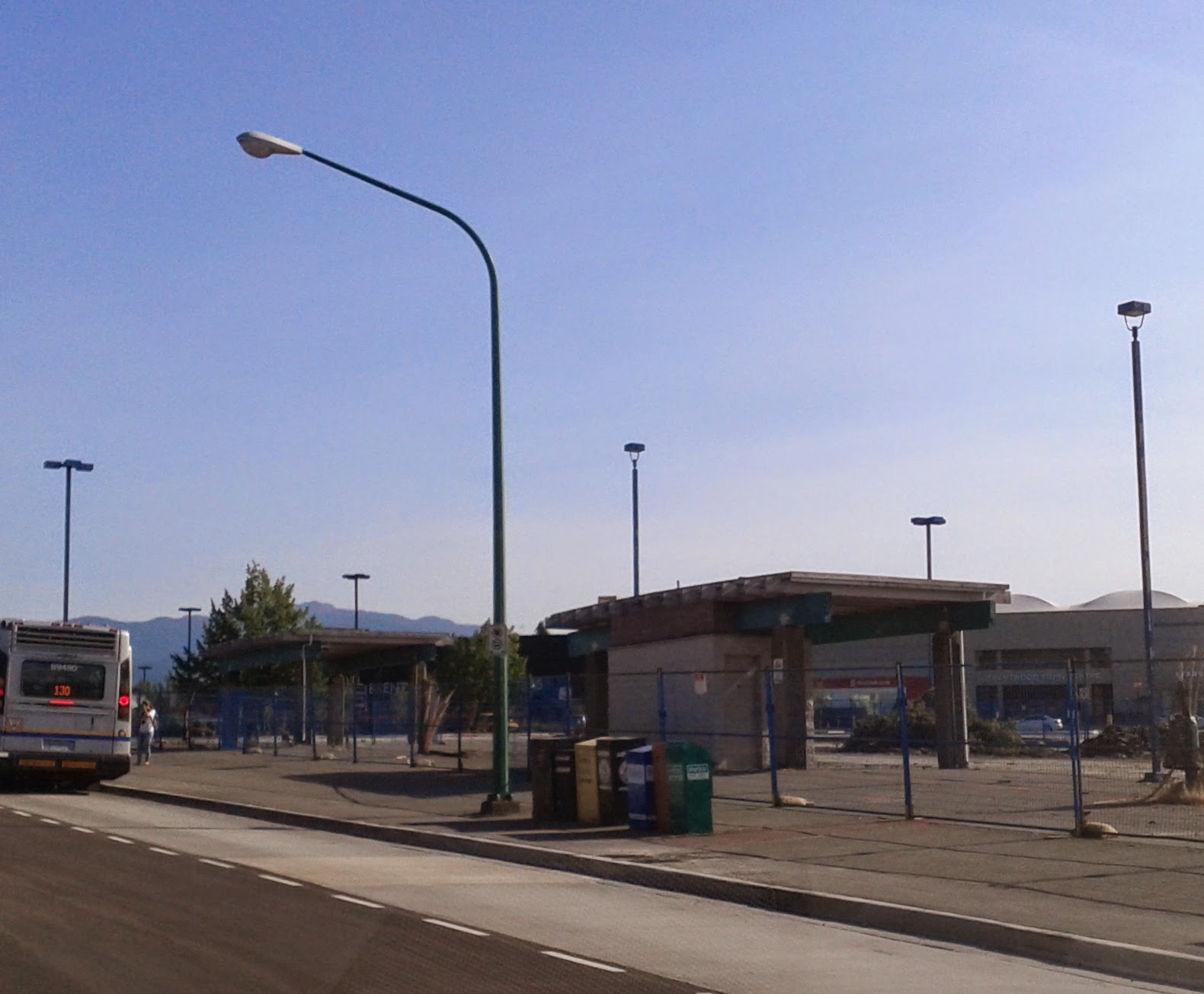 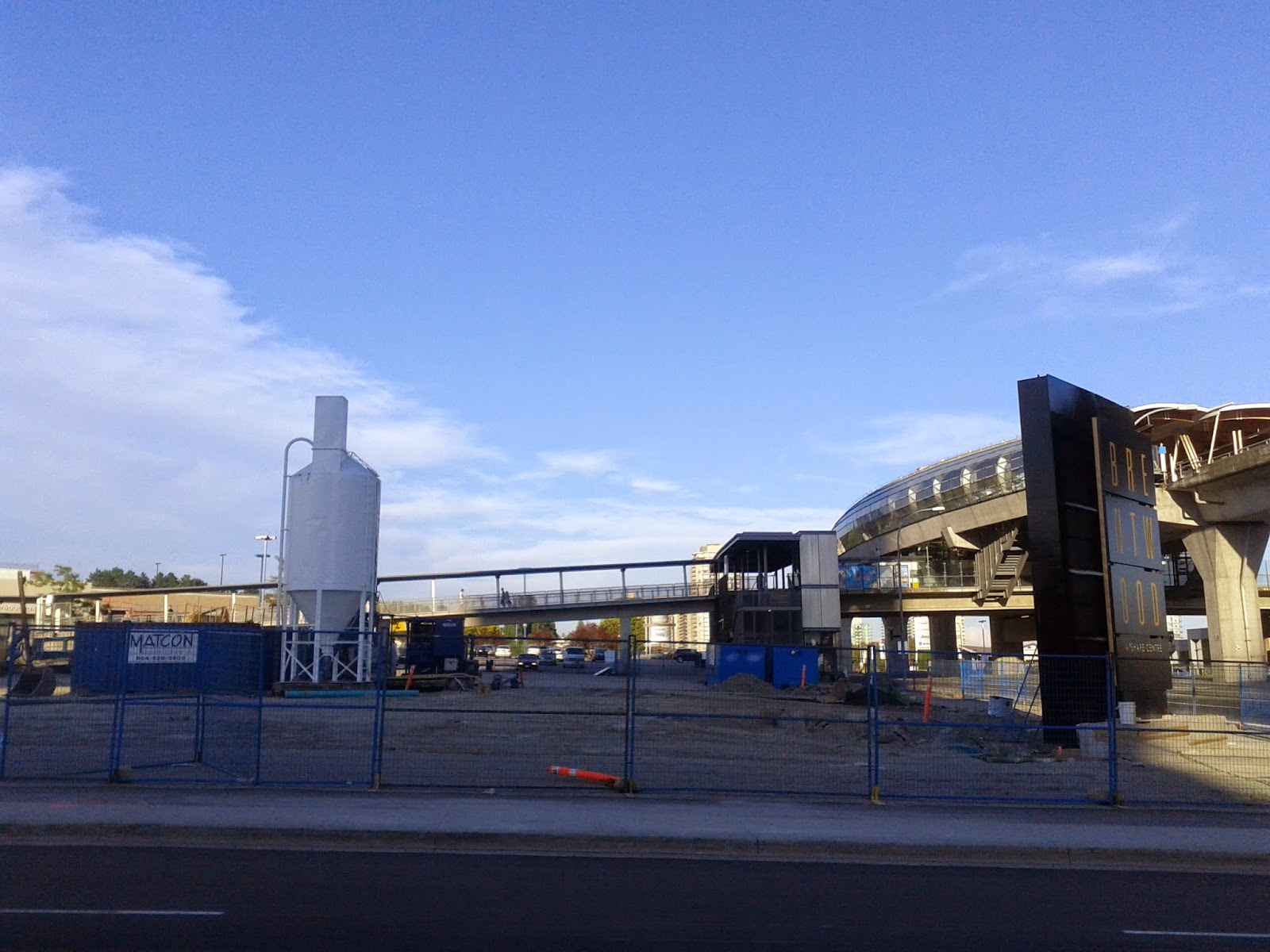 To the east, the old site of the IHOP and Kin's Market has been torn up and fenced off in preparation for building underground parking and a tunnel system there. 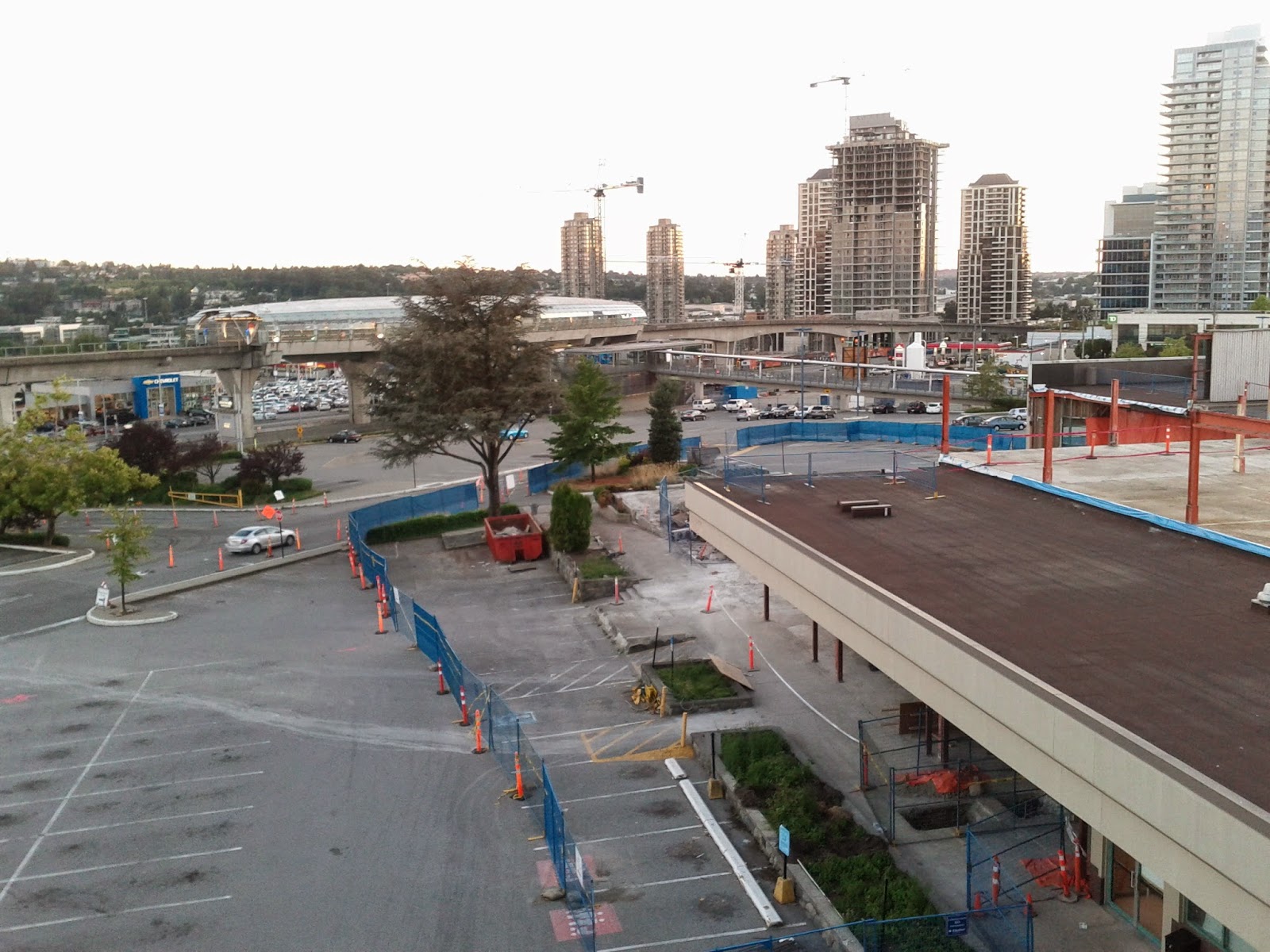