While many in Metro Vancouver lament about the direction that densification is moving the region, according to the following Seattle Times article, Vancouver is at least a decade ahead of where Seattle needs to be when it comes to transit and transit oriented development.  In particular, the article cites the development around Brentwood Town Centre as an example of where future urban living is heading.  While Seattle may feel that it is a decade behind Metro Vancouver in this regard,  we are certainly decades behind other well-developed cities in Europe and Asia.  It's all relative.


Is this the future of Seattle transit?  A look at Vancouver, B.C. -- a city that figured it out years ago

With three fully-built light-rail lines and an interconnected bus network, Vancouver’s transportation system is like Seattle’s, just a couple of decades in the future. But the Canadian city differs in its rock-solid commitment to building housing right on top of transit.

VANCOUVER, B.C. — Stand in the Vancouver suburb of Burnaby, at the Brentwood SkyTrain station, and you can see how the region has literally taken shape around public transportation.

The rail station is surrounded by residential skyscrapers, both completed and under construction. By 2020, there should be 11 towers — some up to 60 stories, with 6,000 homes and a massive mall — within a block or two of the station.

But three miles in the distance lies a cluster of skyscrapers. Scan left, a stretch of empty green, then another clump of high-rises. And a bit farther left, the biggest, highest assemblage of skyscrapers yet.

The towers, all in Burnaby, are built along SkyTrain’s original line, which opened in 1985. The high-rises flag the rail line beneath it — each clump a station — a real-life pop-up map of the transit line.

Metro Vancouver — which comprises Vancouver and 23 surrounding cities and towns — is a region being built, more and more, around its thriving and ever-expanding light-rail system. 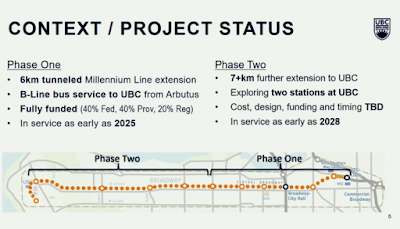