Burnaby Lake Arena should be twinned

The City of Burnaby has recently approved its Proposed Priority Community Amenity Projects.  In my opinion, it is welcome news for city residents as community centre capacity will significantly increase for the Brentwood area with the replacement of the Willingdon Community Centre and the expansion of amenity space at Confederation Park replacing the previously torn down Willingdon Heights Community Centre and the North Burnaby Gym.

Also among the priorities is the replacement of Burnaby Lake Arena and CG Brown Memorial Pool.  Anyone familiar with arena scheduling will tell you that there is an extremely greater demand for arena ice and floor time than the capacity that currently exists between Burnaby Lake, Bill Copeland and Kensington arenas.  Between Burnaby Minor Hockey, Burnaby New West Ringette, skating groups,  Burnaby Minor Lacrosse, and Metro Minor Ball Hockey Association, not to mention public skating programs and events, there is not enough time to fully meet the demand that currently exists for arena space.  Burnaby Minor Hockey Association is one of the largest minor hockey associations in the region with kids ending up on a waitlist to play.  The association is also required to rent private ice from Burnaby 8 Rinks to meet practice and game requirements for the players that are able to play.  Metro Minor Ball Hockey Association turns away a larger number of kids every year as there is not enough floor time for ball hockey in the spring and summer.

Even the upcoming addition of 2 more sheets of ice near Byrne Creek Secondary School will not meet demand for ice and floor time.  Furthermore, population growth projections suggest that even a twinning of Burnaby Lake Arena will not be adequate.  Building one rink versus 2 attached rinks may cost more in the short term,  but the average building and maintenance cost per rink is significantly lower when considering that the arena cooling system is a major cost that is capable of freezing two or more ice sheets and would be a financial waste to install a system for merely one new sheet of ice.

Looking at the size of the property at Kensington Ave between Sprott Street and Joe Sakic Way,  there is more than enough room to accommodate more than two new sheets of ice and provide the same or more amount of parking spaces.

With Burnaby 8 Rinks, Fortius Centre, the Burnaby Lake Sports Complex soccer fields and the proposed future Tennis Canada Training facility adjacent to the soccer fields, the area north of Hwy 1 on Kensington Ave is developing  into a major sports destination.  The City of Burnaby already has a Div 2 NCAA hockey team playing out of Bill Copeland Arena (SFU Hockey). The City is hosting an IIHF World Junior Hockey Championship exhibition game between Russia and Switzerland this month and will host the World Ringette Championships in 2019.  The addition of more arena capacity will give the City of Burnaby a greater profile as a potential host city for more events int the future and bringing spin-off tourism revenue.  With a steadily increasing demand for arena ice and floor time not showing signs of abating, it would be a wise decision if the City of Burnaby studies the feasibility of twinning Burnaby Lake Arena instead of merely replacing it and looking to maximize the potential future economic benefits of such an expansion.
Posted by Brentwood Station at 8:46 AM 10 comments: 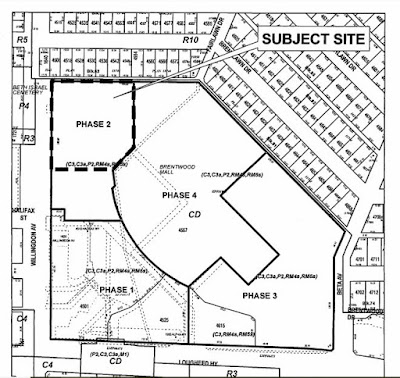 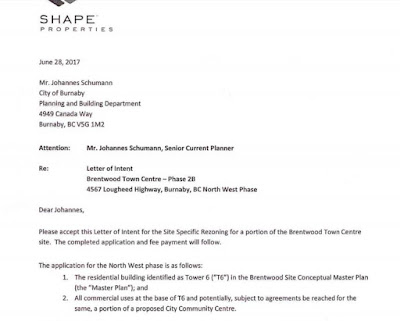 Shape Properties has also presented a letter seeking approval for the building of a Tesla showroom within the former Sears building at the eastern end of the Brentwood Mall site. 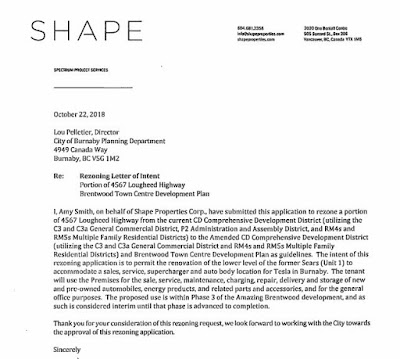 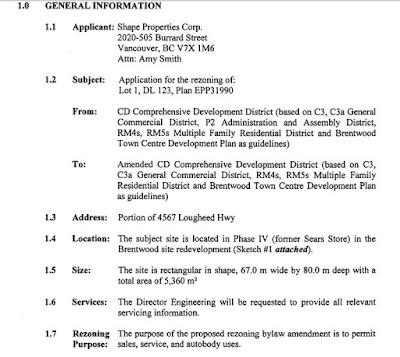