SE corner of Dawson and Willingdon sold to developer

The southeast corner of Willingdon and Dawson has been sold and will pave the way for another major development that will take it eastward to Alpha Ave and south as far as Alaska Street.

An 8.13 acre land assembly at the corner of Willingdon Avenue and Dawson Avenue has sold to Aoyuan Property Group (Canada), a Hong Kong based developer, for $152,000,000. 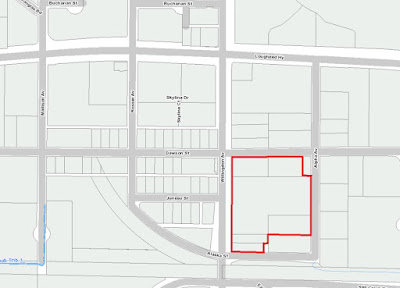 Porte rising at Madison and Dawson 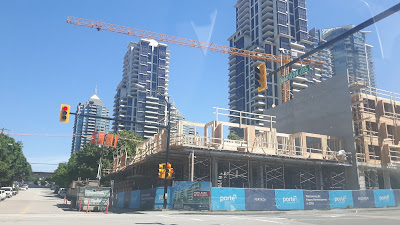 Posted by Brentwood Station at 4:23 PM No comments:

Sears has filed for bankruptcy protection.  In doing so, Sears has officially brought urgency to Shape Properties' problem of finding a use for the giant 3-level space at the east end of Brentwood Mall in the event that Sears decides to shut down its Brentwood location.  In good news, the Brentwood location is not among the listed stores slated for closure so far.

One of Canada's major retailers is seeking shelter under the Companies' Creditors Arrangement Act to restructure its business.

Sears Canada has filed an application to the Ontario Court of Justice to deal with serious cash-flow problems.
In Metro Vancouver the company has department stores at Capilano Mall, Brentwood, Metropolis at Metrotown, Coquitlam Centre, and Willowbrook Shopping Centre.
Across the country, Sears Canada has 95 full-line department stores, 26 home stores, and 14 outlet stores, according to its 2016 annual report. It also has 69 Hometown stores and 62 Sears Travel offices.
The court filing comes less than two weeks after Sears Canada reported a $144-million quarterly loss.
The company put a bright shine on the announcement in a news release on its website.
"Sears Canada rebuilt its front and back-end technology platform, redefined its brand positioning, revamped its product assortment, and rebooted its customer experience and service standards," it stated. "The new product assortment is reflected in two pillars, The Cut @ Sears, which offers designer labels at everyday value prices, and the Sears Label, which offers premium quality and enduring styles, also at everyday value prices.  The customer experience was reinvented, both online, with a newly designed site built in-house by a new technology team, and in-store with a new format called Sears 2.0."
It also claimed that its customer service standards are "best-in-class", noting that it "launched a new store in downtown Toronto to showcase its reinvention to an entirely new audience".
"The Company's hard work to bring its vision to reality is reflected in reported growth in same store sales in its two most recently completed quarters," it added. "Sears Canada believes this indicates that the new brand positioning is starting to resonate with consumers."
Some companies that seek protection under the Companies' Creditors Arrangement Act emerge successfully, such as Air Canada. But for others, like Target Canada, filing for bankruptcy protection was one of the steps along the way to its demise.
Under the act, if the application is approved the court will appoint a monitor who is a trustee in bankruptcy. This ensures the company continues operating as it deals with creditors.
Posted by Brentwood Station at 7:19 AM No comments:

Sears' days may be numbered as the company recently announced that it's future is in doubt.  It's retail model has certainly seemed outdated for at least the past decade.

5 years ago, I walked into the Brentwood location to look for an exercise bike.  After browsing through the multiple exercise bikes on display, I settled on the model and type that suited me.  When I got a hold of a staff member to let them know that I would like to purchase that particular exercise bike, he brought me to the register where I made the purchase.  The staff member asked me for my telephone number, handed me the receipt and told me that they will call me when the bike arrives within  2 weeks and that I can pick it up at their warehouse downstairs. This was done without previously informing me that they don't stock such items in the store.  I was stunned that a store with such a massive footprint just took more than $350 dollars of my hard-earned money only to tell me that I must come back 2 weeks later to pick up my purchase.  Stunned, I didn't complain.  I just walked past the, "60% Off" shirts that were now priced down to $50 dollars (can buy the same shirts at full price for $15-25 elsewhere) and exited the store.  Sears has gotten so comfortable with its retail model that it has lost touch with the reality of consumers living in an economy where wages have fallen far behind the cost of consumer goods, food and housing.  The minimum wage in BC is currently $10.85/hour.  The minimum wage in 1991 was $6.00/hour when you could buy a 700 square foot 1 bedroom condo for $60, 0000.  I digress.

Enough of my experience with a dinosaur of a retailer that has existed long past its extinction date.

Now that Sears is likely to leave a massive void at the east end of Brentwood Mall within the next 1 or 2 years,  Shape Properties is now tasked with the job of deciding the future of the 3-level big-box space.  The current plan for the southeast end of the site at Beta and Lougheed is to build a grocery store beneath a residential tower just across the parking lot from the lowest Sears level.  Perhaps the vacated Sears space is best suited for a grocery store in at least the lowest of the 3 vacated levels. The other 2 levels could be used for 2 or more smaller retailers.  Perhaps a fitness gym/martial arts facility could go into part of the space.

Future of Sears Canada in doubt 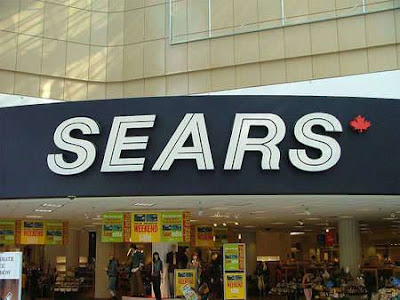 Hundreds of employees at Metro Vancouver Sears Canada stores and thousands more across the country are on edge today following the latest bit of bad news.
The company has announced a 15 percent drop in sales in the first quarter, posting a net quarterly loss of $144.4 million.
On the upside, same-store sales rose by 2.9 percent in the first quarter.
Sears Canada has 95 full-line department stores, 26 home stores, and 14 outlet stores, according to its 2016 annual report. It also has 69 Hometown stores and 62 Sears Travel offices.
Its five Lower Mainland department stores are at Capilano Mall, Brentwood, Metropolis at Metrotown, Coquitlam Centre, and Willowbrook Shopping Centre.
It closed its Richmond Centre store more than two years ago.
Sears Canada has postponed its 2017 annual shareholders meeting, which was scheduled for Wednesday (June 14), as it tries to address its "liquidity situation".
"Based on management's current assessment, cash and forecasted cash flows from operations are not expected to be sufficient to meet obligations coming due over the next 12 months," Sears Canada stated in a news release.
It had expected to be able to borrow $175 million (before transaction fees), which would be secured by its owned and leased real estate.
However, negotiations with its lenders have resulted in only $109 million being available.
"That, and the lack of available alternative sources of liquidity (through real estate monetizations, asset sales or otherwise), which may not be available in a timely manner, mean there are material uncertainties as to the Company's ability to continue to satisfy its obligations and implement its business plan in the ordinary course," the company stated. "Accordingly, such conditions raise significant doubt as to the Company's ability to continue as a going concern."
Posted by Brentwood Station at 10:26 AM No comments:

A reader of this blog shared this link in a previous post on the Willingdon Linear Park.  The video has been produced by the City of Burnaby.

Posted by Brentwood Station at 10:32 AM No comments: