I've heard from different sources that a food store on the corner of Beta Ave and Lougheed Hwy will be a part of Phase 2 of the Brentwood Mall Redevelopment.  The arrival of this grocery store will result in 3 supermarkets along a 3 block stretch of Lougheed Hwy.  A Save-On-Foods is located at Madison and Lougheed and a Whole Foods will be located at Rosser and Lougheed where Phase 1 of the Solo District development is currently underway.

No Frills recently backed out of its plan to open a store at the Greystone Plaza next to Burnaby Mountain Golf Course.  According to the Burnaby NewsLeader article below, a SuperValu store is set to open there instead on May 22.

An explanation for No Frills backing out of Greystone might be that  it has plans to open in the Brentwood Town Centre but this has not been confirmed.  A No-Frills store might be a good counter-balance to the pricier Whole Foods and Save-On-Foods stores. 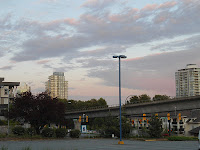 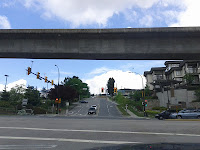 By Wanda Chow - Burnaby NewsLeader
Published: May 14, 2013 11:00 AM
Mike Belich could be the most popular guy in North Burnaby.
As the franchisee of a new SuperValu store set to open in Greystone Plaza May 22, all he has to do is show his face and he's got area residents wanting to talk to him.
"I stand out here, the people queue up to talk to me," said Belich, who grew up in East Vancouver and now lives in Chilliwack. "They wait for me to come out and then ask questions."
And while Belich has been busy inside in recent weeks setting up the store, "I'm pretty sure every person in this neighbourhood for a mile around has peeked in the window."
Indeed, while he talks with a NewsLeader reporter outside, a man gets out of his car and shouts across the parking lot, "It's about time. We've been waiting two years for this place to open!"
After a quick friendly chat with Belich, the man turns to his father and tells him to "say goodbye" to the supermarket where he's been shopping in the meantime.
It appears customers at the location, on the corner of Burnwood and Greystone drives near Burnaby Mountain Golf Course, are a loyal bunch.
Ever since the former Marketplace IGA closed in that location in November 2011, the NewsLeader has received periodic calls and emails from area residents wondering when a new grocery store would be opening.
At first Loblaw Companies Ltd. said it planned to open a No Frills store there but by the summer of 2012, it was to be a SuperValu "due to a change in the strategy of the business," the company said at the time.
With many seniors living nearby without easy access to transportation, the location provided a convenient place to shop. Area resident Allison Johns said in an interview a year ago that the IGA also served as a community gathering place.
That's just the sort of store Belich hopes to create.
A second-generation grocer, Belich grew up in the business and is a meatcutter by trade. He's been in the business for 40 years and has also owned the Supervalu franchise in Deep Cove for the past 12 years.
The new store will target customers who like to shop for fresh groceries daily and will feature organic and natural products, along with meat, deli and bakery departments and a selection of items from Loblaws' brands, such as Presidents' Choice. "We want people to tell us what they want," he said.
He believes the lengthy closure of the location was due to construction delays before he got involved as the franchisee.
Some of the former staff of the IGA will be back and led by manager Michelle who has worked with Belich off and on for the past four decades.
At 14,000 square feet, the store will be known as Greystone SuperValue and be open 8 a.m. to 9 p.m. seven days a week.
Belich aims to offer "real personalized service," including home deliveries and phone-in orders, and be a place where people can grab a sandwich and coffee in an environment where staff know them by name.
"I'd like it to be a little place where you can pop your head in and say 'how's it going?'"
Greystone SuperValu, at 1601 Burnwood Drive, will open Wednesday, May 22 at 8 a.m.
wchow@burnabynewsleader.com
twitter.com/WandaChow
Posted by Brentwood Station at 9:57 PM