The Brentwood Crossing development appears to be moving ahead with a public hearing scheduled on September 20th at Burnaby City Hall.  The development will begin to establish (at its corner) the intersection of Lougheed Hwy and Willingdon Ave as major pedestrian crossing as more residential and commercial/office units are established.   With the Vantage project underway just west of this project and the Brentwood Mall project in it's infancy at the opposite corner, we can expect cranes to be prominent features in the skyline around Brentwood for a number of years. 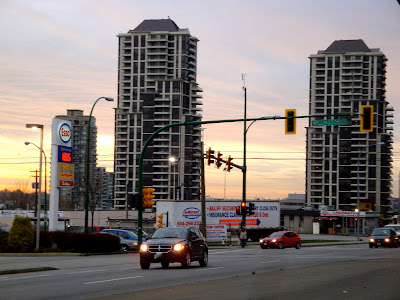 Below are conceptual images from www.dikeakos.com 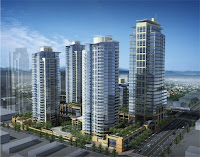 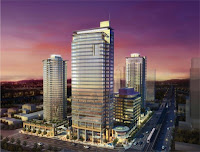 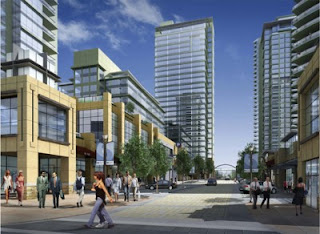 
By Wanda Chow - Burnaby NewsLeader
Published: September 01, 2011 10:00 AM
Updated: September 01, 2011 10:25 AM
A new Brentwood-area development proposal could transform the southwest corner of Willingdon Avenue and Lougheed Highway.
The mixed-use proposal is for a 6.65-acre site kitty corner from Brentwood SkyTrain station that currently includes a car dealership, restaurant, auto-repair shop and other light industrial properties. Bounded by Willingdon, Lougheed, Rosser Avenue and the north lane behind Dawson Street, it requires a rezoning and will go to public hearing Sept. 20.
An earlier proposal for the site which received second reading in 2008 comprised two highrise office buildings, three highrise apartment towers and ground-oriented commercial and retail, according to a city staff report.
Since then, Burnaby council has adopted a change to the city’s zoning bylaw expanding density bonus provisions to certain zones within the four town centres of Brentwood, Metrotown, Lougheed and Edmonds.
As a result, the developer is now proposing a new plan that takes advantage of the potential added density.
The current proposal consists of 1,351 residential units in four highrises, ranging in height from 39 to 48 storeys, the latter within a mixed-use tower that includes 13 storeys of office space. Units will range in size from 413-square-foot studios to 1,750-square-foot three-bedrooms-plus-den units. Five per cent, or 68 units, will be adaptable for persons with disabilities.
It includes about 250,000 square feet of office space and about 112,000 square feet of commercial space. It also now includes significant plaza and open green space.
Within the site, Sumas Street will be a “high street” with retail storefronts, pedestrian walkways and street furniture and the entire project aims to be pedestrian friendly with front doors of commercial spaces opening directly to the street, the report said.
The developer plans to build to a Leadership in Energy and Environmental Design (LEED) gold standard, and will provide transit passes for two years to 15 per cent of the units, twice the required secured bicycle parking, memberships in a car-sharing program and three cars per residential phase for the car co-op.
If approved, the project would be built in four phases. As part of the density bonusing program, the developer will provide an amenity bonus for the first phase of more than $8.8 million. Of that, $2 million will come in the form of a 4,570-square-foot city-owned community space on-site and $6.8 million cash-in-lieu to be used for future Brentwood area amenities. Of that, $1.36 million will be designated for affordable and special needs housing projects.
The applicant is Chris Dikeakos Architects of Burnaby. The public hearing will be held Tuesday, Sept. 20 at 7 p.m. in city hall council chambers.
wchow@burnabynewsleader.com
Posted by Brentwood Station at 2:24 PM