The Solo District development at Willingdon and Lougheed is beginning to receive a lot of press as it gets set to rise and temporarily become the site for the tallest building in Burnaby.  The 70-story towers at Brentwood Mall's redevelopment will eventually take that distinction once they are built over the next few years.

As the story below mentions, the developer of this project will build a City-owned 4000 square foot space and contribute $30 million to the density fund pool dedicated for amenities in the Brentwood area.  The use of the City-owned space has yet to be decided and announced.  The project is situated south of Lougheed, and east of Rosser Ave to the west of Willingdon Ave. 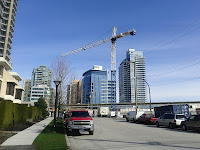 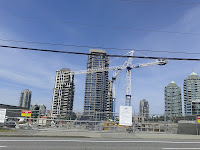 The Brentwood neighbourhood will be home to Burnaby's tallest tower after the second phase of the SOLO District development held its groundbreaking ceremony Saturday.
The project by Appia Developments will stand more than 550 feet tall, second in B.C. only to the Shangri-La in downtown Vancouver. The 55-storey building will have 48 "floors" due to some levels being double height.
Commercial units, including office space, will take up the first 14 floors, while 280 residential units will make up floors 15 to 48. A 5,000-square-foot, indoor-outdoor amenity space for building residents, dubbed "Club 55," will take up the rooftop.
A public preview of the new homes was held last Saturday with sales to start this weekend, on June 22.
Recent reports of a slowing real estate market and concerns about an oversupply of condos don't concern Jim Bosa, president of Appia.
The way he sees it, he doesn't have a whole lot of competition at the moment. While the redevelopment of Brentwood Town Centre mall, kitty-corner across Lougheed Highway and Willingdon Avenue, is in the planning stages, construction has not yet begun. That makes SOLO the only project currently selling at that intersection closest to Brentwood SkyTrain station.
"I think where I am I'm in a pretty good position, [there's] not much that's going to be starting anytime soon, not much competition, good area," Bosa said. "The people that buy from me they really want to stay there."
He said many of the buyers in the existing project are familiar with Brentwood or are from there and like the proximity to transit and services.
Rather than being in a downturn, Bosa believes the current condo market is getting back to what should be normal.
"Everyone got too used to selling out overnight and everyone expected that was the norm," he said with a laugh. "After a few years of doing that they got used to it and then they started to get scared when it wasn't selling out overnight.
"I've been doing this for 20-plus years, for the first 10, 15, that wasn't the case at all. You get a good little chunk [of sales] in the beginning when you launch, and then if you can trudge along and get a good number every month, eight to 10 a month, you were doing good. That was considered a good market," he said.
"Ultimately, by the time you came to completion of the project, if you had maybe a handful of units left, well what was there to complain about?"
Stratus, the first phase of SOLO, has so far sold 230 of its 360 units, Bosa said. Construction is expected to be completed by May 2015. Burnaby's first Whole Foods supermarket is expected to open just before that, also in spring 2015.
Construction on Altus will start in about a month once permits are in place, with completion of the condominiums by the third to fourth quarter of 2016. The retail space will be ready for occupancy by late spring of 2015, and the offices by the fall of 2015.
When all four phases of SOLO District are complete, the 6.5-acre development will house about 3,000 people in more than 1,400 homes.
Through Burnaby city hall's density bonus program, Appia will also be contributing $32 million in community amenities, including a city-owned 4,000-square-foot community space and $30 million in cash to be used for amenities elsewhere in the neighbourhood.
SOLO District is being developed with several green features, including geothermal heat exchange systems, individual gas meters in each condo unit and electric car charging stations.
wchow@burnabynewsleader.com
twitter.com/WandaChow
Posted by Brentwood Station at 5:41 PM