As the Solo District site excavation has gotten under way on the southwest corner, the Brentwood Redevelopment is inching towards a definitive plan for the northeast corner of Lougheed and Willingdon. 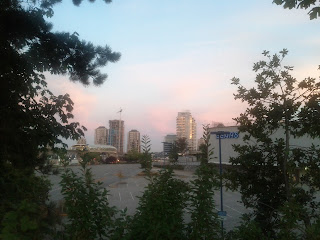 This story (below) has been reported in the Burnaby Now.  The webpage noted in the article has a video link that provides a graphic rendering of the project.
Shape Properties Link

BY JANAYA FULLER-EVANS, BURNABY NOW OCTOBER 17, 2012
The City of Burnaby staff report on the Brentwood Town Centre conceptual master plan was presented to council at Monday night's meeting.
The report did not recommend any changes to the plan but gave a synopsis of public feedback on the project and provided answers to questions that arose during the public consultation process.
Twenty-seven delegates spoke at the public hearing on the project in August, according to the report, with 16 in favour of the project, five people expressing opposition to it, and six others voicing concerns and questions.
The city also received 91 writ-ten submissions - 66 expressed support and 25 expressed concerns, according to the report from Lou Pelletier, director of planning and building.
The Brentwood master plan would divide the 11.5-hectare site at 4515 and 4567 Lougheed Hwy. into four quadrants for development, with the first phase including two residential towers that could range in height from 45 to 70 storeys at the corner of Willingdon Avenue and Lougheed Highway.
The proposed development is divided into four phases and would include 10 residential towers - with a structure capable of accommodating one more in the future - possibly ranging in height from 20 to 70 storeys depending on the location, and two office towers ranging in height from 30 to 40 storeys. The design also includes a redeveloped commercial centre, a 50,000-square-foot food store, and a variety of public outdoor spaces.
The report provided answers to some of the questions that arose during the public hearing, with a specific focus on the height of the towers.
The range of heights is consistent with the permissible densities designated by council in the 1996 Brentwood Town Centre development plan, the report stated.
City staff worked with the developer on plans for the tall, thin towers as opposed to more shorter, bulkier towers that would obstruct views and provide less open space.
The tallest towers would be at the corner of Willingdon Avenue and Lougheed Highway, the report added, with the other towers continuing inwards on the site in a lower, terraced form.
Traffic was another prevalent issue, and the report stated that more detailed traffic impact analyses would be required as part of each site-specific rezoning application.
But more parking would be available as part of the underground parking plan, it added, and two access points would be added to the development.
Questions on school capacities, open and public spaces, transit, and other issues were also addressed in the report.
The master plan does not include a specific development proposal and construction is not moving ahead at this point, Pelletier stressed in a follow-up email to the NOW.
"At this stage, the master plan concept under consideration by council is intended to help guide future development applications," he wrote. "In future, as approved by council, specific applications would be received for each phase of development, with further detailed review and development of the concept to take place at that time."
The master plan proposal passed second reading at the council meeting.
The next step is third reading and final adoption.
The developer will next work on getting the plan to final adoption, according to Darren Kwiatkowski, executive vice-president of Shape Properties, which owns Brentwood Town Centre.
This will include meeting the city's technical requirements, he added.
"It's what's usually referred to as a prior-to list," he said.
The rezoning application for the project is different from most, as it is divided into two parts, Kwiatkowski explained.
This one is a bit unique," he said. "It's actually a two-step rezoning process. So the next step is a site-specific rezoning for phase one."
The second part of the process has very specific requirements, Kwiatkowski said, and it will likely be months before it is up for first reading.
"I expect that the site specific zoning will likely take about six months," he said. "There's a lot of detail required."
The site-specific rezoning application will also go to public hearing after it comes before council.
For more on the plan, go to www.shapeproperties.com/our-places/brent wood-town-centre.
© Copyright (c) Burnaby Now

Posted by Brentwood Station at 8:30 AM