Cycling lanes are not the problem

I've mentioned cycling-friendly infrastructure as one of the features that would make the Brentwood area better. The benefits of allowing people to be more comfortable getting out into the neighbourhood on their bicycles when running errands or going for a coffee are well documented. The environmental and health benefits of cycling are well known.
The recently-built cycling lanes in downtown Vancouver have created an uproar from drivers and businesses. In particular, businesses along the length of the the Dunsmuir and Hornby bike lanes have complained about a drop in customer traffic due to the loss of parking spaces that gave way to the bike lanes.

If the decision makers had taken the time to consider all possible options when designing the bike lanes, they would have foreseen the flaw in the current design and would have been able to retain street parking while building the lanes. Instead of being placed on the street between the sidewalk curb and the car lane, the bike lanes should have been placed on an extended/widened sidewalk with barriers separating cyclists from both pedestrians and automobile traffic. Both the sidewalk and the car lane would each lose a couple of feet or a combination thereof, and the parking spots could still be located along the street.

A simple rearrangement from the current setup would have resolved the parking issue for businesses as they would not have lost on-street parking. Of course, with space already limited in the downtown core, the suggested design may pose challenges there. In my opinion, this is a challenge that the city should have attempted to overcome.

The Brentwood area does not have the same space constraints as downtown Vancouver. Because the City of Burnaby still has the luxury of space in its town centres, it must consider building cycling lanes between on-street parking and the sidewalk, allowing for on-street parking to remain. This is not a new concept as it is used elsewhere. As the following image I found at cycletoronto.blogspot.com shows (below right), cycling lanes do not have to compete with parking space at the extreme level shown by their construction in downtown Vancouver: 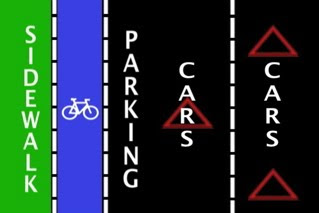 The City of Vancouver could have spared itself from the ire of those negatively impacted by the poorly-designed cycling lanes by doing a little research online at the above mentioned cycling blog. Hopefully the City of Burnaby is not deterred from adding cycling lanes along commercial streets in areas like Brentwood just because of the problems that Vancouver has created with its cycling initiatives.
Posted by Brentwood Station at 9:17 AM