Sears Canada has announced that its Brentwood location will close down.  Whether this is a blow or a benefit to Shape Properties remains to be seen. 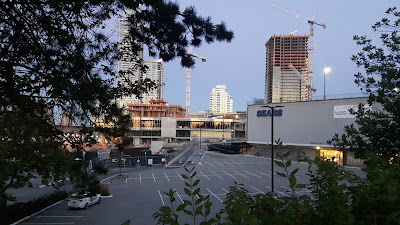 Sears Canada has announced that it will close 11 of its stores across the country, as the company continues to fight for survival after filing for bankruptcy this summer. Several of the announced locations are in significant shopping centres, providing opportunities for redevelopment. Of the 11 announced locations, 10 are full-line Sears stores, and one is a Sears Home Store. Leases will be returned to their respective landlords.

The company announced the store closures in a press release on the evening of Friday, September 29, also noting that the company has also entered into an agreement of purchase and sale relating to its Garden City Shopping Centre location in Winnipeg, and has entered into a lease transfer agreement relating to the small-parcel fulfillment centre in Calgary. As part of the store closures, an additional 1,200 people will lose their jobs.
The 10 full-line Sears Canada stores announced for closure include the following:
-Nanaimo North Town Centre, Nanaimo, BC
-Brentwood Town Centre, aka 'The Amazing Brentwood', Burnaby, BC
-Orchard Park Shopping Centre, Kelowna, BC
-CF Polo Park, Winnipeg, MB
-CF Lime Ridge, Hamilton, ON
-Oakville Place, Oakville  ON
-CF Fairview Mall, Toronto, ON
-Scarborough Town Centre, Toronto, ON
-CF Fairview Pointe-Claire, Montreal QC
-Avalon Mall, St. John's, NL
As well, a separate Sears Home Store will also close at Kelowna’s Orchard Park Mall.
Landlords will need to identify opportunities to fill these locations, at a time when some are still struggling to tenant spaces vacated by Target in 2015 -- Target shuttered all 133 of its Canadian stores when it exited Canada after suffering considerable financial losses. Several of the malls announced above are actually very strong centres, according to Retail Council of Canada’s Shopping Centre Study (the 2017 report will be released in November). The following is a discussion of the malls where Sears is closing, including challenges and opportunities.
Nanaimo North Town Centre, Nanaimo: The 600,000 square foot mall will lose its only major fashion anchor with this closure. Other anchors include Lowe’s, London Drugs, and a freestanding Canadian Tire store.

Brentwood Town Centre, Burnaby: Now being overhauled and rebranded as The Amazing Brentwood, it was unclear if Sears would have remained as a tenant here regardless — the centre is being positioned as being more upscale, in partnership with LCatterton group, the private equity firm associated with French luxury conglomerate LVHM. While luxury brands will be added to the expanded centre, landlord SHAPE says that there will be retailers at a variety of price-points.
Orchard Park Mall, Kelowna: Kelowna’s leading mall will lose one of two fashion anchors — Hudson’s Bay will continue to operate in the centre. Sears operates a fashion store and a separate Sears Home store in the mall, which is also anchored by Sport Chek and Best Buy.
Posted by Brentwood Station at 1:12 PM