TransLink has revealed the route for the future Broadway Line extension to Arbutus Street.   By choosing to extend it from the Millennium Line from VCC Clarke instead of starting it at Commercial Broadway, TransLink has made the right decision.  It would not have made any sense to start tunnelling from Commercial Broadway when they could save hundreds of millions of dollars by beginning the tunnelling further west at Main Street.  Now time will tell if there is an appetite to just go ahead and continue the extension past Arbutus all the way to UBC sooner than later. 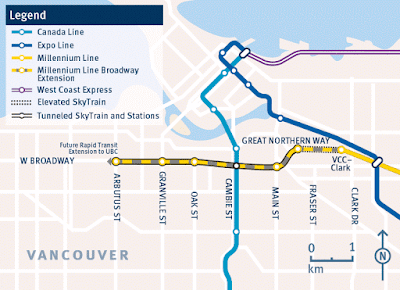 TransLink will begin public consultation in late January on two new train lines planned for Metro Vancouver, the transit authority announced today.
Consultations on the Broadway extension of the Millennium Line will begin Jan. 28.
Consultations on the Surrey-Newton-Guildford LRT project will begin Jan. 24.
The regional transit authority also says it will be doubling SeaBus service on Sundays and holidays and adding more frequent service at peak times on the Expo, Millennium and Canada lines as part of the first phase of its 10-year plan.
TransLink CEO Kevin Desmond said the service improvements announced today are the first of many the transit authority plans to roll out every three months for the next few years.
Vancouver Mayor Gregor Robertson said the plan is the biggest investment in regional transit since 2009, when the Canada Line was built.


"This is really comprehensive improvement around the region," Robertson said. "That's why the mayors supported it so strongly, because it will make a difference in every community across Metro Vancouver."

The Broadway Extension will extend the Millennium Line  from its current VCC endpoint southwest to Broadway and Main, and then west to Arbutus Street.
Previously officials had proposed extending the line all the way west to UBC, but Desmond said it was important to relieve pressure on the 99 B-Line route as soon as possible.
"Will rail eventually get to UBC? I'd say that's probably a good chance," Desmond told reporters at a press conference Tuesday. "When? I don't know. But for now, we need to get to Arbutus [and] relieve a lot of crowding on the bus service."
Robertson said the Metro Vancouver Mayors' Council's 10-year vision does include the possibility of extending that line to UBC, but planning would not begin until near the end of that 10-year vision.
Posted by Brentwood Station at 2:23 PM