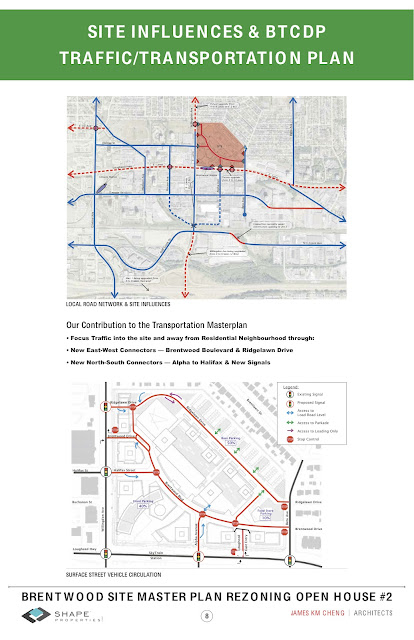 The future townhouses built at the north end of the site will have their addresses on the extended portion of Ridgelawn Drive.  The townhouses will face east-west instead of north-south to minimize their impact on the single-famly homes to the north.  The development also appears to have dropped its original idea of tapping into the rear lane located behind those homes to use as a shared lane with the townhouses.

The 'Fashion' and 'Village' districts will be located on the new Brentwood Bvd.  The new boulevard is expected to be a destination street where the hustle and bustle of human activity will take place.  Major brand stores are expected to front this section of the development and the level of lease rates will certainly reflect this.  The map above has confirmed the desire of the development to have a grocery store in the Village District of Brentwood Bvd.
Posted by Brentwood Station at 12:48 AM