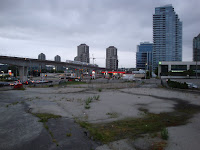 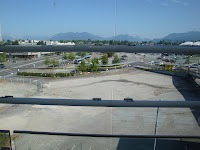 The scenes of crowds gathered at Hamilton and Georgia Streets outside the CBC broadcast centre have been nothing less than spectacular.  The spontaneous, joyful interaction with complete strangers during the playoffs has been very enjoyable during my commute on the Expo and Millennium Lines back to Burnaby.  As the area around Brentwood Station develops into a town centre, I hope it develops in a way that will attract large crowds for events during important days of the year such as Remembrance Day, international sporting events, Canucks playoff runs or even local entertainment productions that will attract outdoor crowds.
Until it happens, I can continue to dream.
Posted by Brentwood Station at 7:44 PM