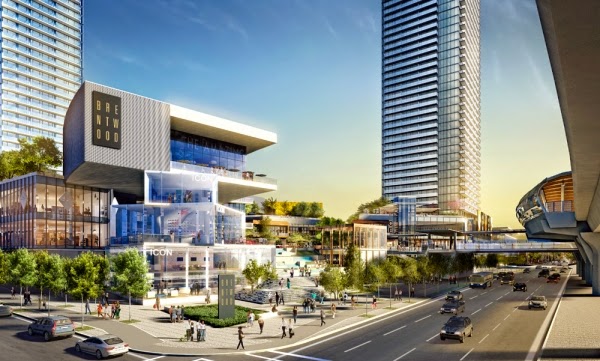 Meanwhile, to the west, Concord Pacific plans a multiphased mixed-use development on its 10.5-hectare site. And to the east, just south [sic] of Brentwood Station, is the largest development of them all. On its master plan for the 11.5-hectare site of the Brentwood Mall, Shape Properties has included 11 towers of between 45 and 70 storeys, as well as a grand public square connecting to shops and restaurants.
As he enjoys his beverage and a sandwich, Burnaby resident and former city staffer David Pereira tells the Georgia Straight the story of how it all unfolded. The tale begins before Burnaby was incorporated, when two real-estate agents approached the provincial government because they wanted to sell property between Vancouver and New Westminster. Pereira says he learned much of this history a few years ago while researching his 2011 master’s thesis on Burnaby’s four town centres: Brentwood, Lougheed, Edmonds, and Metrotown.
“I basically saw the plans; they referred to the other plans, and I went back and just found an awesome breadth of history,” he says. “That’s where I found all these town centres were connected. They were not just something that was created. They’re an evolution as a result of a very purposeful initiative that came from the regional district.”
A major turning point for Brentwood occurred when the shopping mall was approved in 1959 to lure people to buy homes in the area. “There was absolutely no opposition whatsoever to the mall because that was what they advertised to entice them to live there.”
He says the city’s long-term planning director, Tony Parr, played an instrumental role after he was hired in 1964. The same year, the Lower Mainland Regional Planning Board proposed a policy that Burnaby double its population over a seven-year period.
“You look at Coquitlam’s town centre and you look at Richmond’s town centre: they’re three times the size today than they were then,” Pereira says. “They weren’t really interested in the town-centre policy. You go to Burnaby and it mimics very closely what the city started. Those boundaries of the town centres stayed very close to what they were way back in the day. I found that to be phenomenal.”
In 1964, the city approved a long-term planning vision for 150 hectares in the Brentwood area, but the following year council thwarted a follow-up apartment study. Nevertheless, Pereira says the groundwork had been laid for densification, decades before the SkyTrain was built. Another major turning point came when the provincial government approved the Millennium Line in the 1990s. Even after it opened, the owners of the mall were not interested in developing condos near Brentwood Station until Shape Properties bought the site in 2008.
For a while, Pereira worked as an executive assistant to Burnaby’s mayor, Derek Corrigan. Speaking to the Straight at a Labour Day picnic at Swangard Stadium, Corrigan revealed that even he is surprised by the level of development taking place in Brentwood Town Centre.
“We expected that Brentwood would develop very slowly over a couple of decades,” Corrigan said. “The uptake on Brentwood has been absolutely amazing. It has outstripped Metrotown in development applications. For some reason, it hit a sweet spot with consumers who feel they’re very well connected to Vancouver and downtown Vancouver by Brentwood. Also, they’re in a position where they’re able to get easy access to the highway if they want to go anywhere across the Lower Mainland.”
Corrigan laughed as he told how one of his council colleagues, Pietro Calendino, moved into Brentwood with his wife while their North Burnaby home was being renovated. “Now their house is ready but his wife doesn’t want to move out,” the mayor reveals. “She loves it. She gets on SkyTrain and doesn’t have to worry about a car.”
Corrigan and Darren Kwiatkowski, executive vice president of development at Shape Properties, each separately confirmed that the company is in discussions with the city over including a community centre on its site. Corrigan also said the city is using its density-bonus money to invest in sound and light equipment and fountains in the plaza to create a community gathering place.
Meanwhile, Kwiatkowski told the Straight in an interview in his downtown Vancouver office that this plaza will be unlike anything else in the Lower Mainland because it will be level with Brentwood Station. From there, SkyTrain passengers can directly access the plaza and then walk down a grand staircase to the corner of Lougheed Highway and Willingdon Avenue.
In its first phase, the developer is building two 53-storey residential towers. Eventually, it’s expected there will be 500,000 square feet of retail space accessible from outside and possibly two office towers. Kwiatkowski confidently predicts that there will be the type of chef-inspired restaurants one normally only sees in downtown areas. “Everyone is not racing out to suburbia to buy a single-family home,” he said. “The culture has shifted and aligned with the planet. The retailers and the shops have come in as they see where the population growth is going. And SkyTrain has become a major driver of how people get around.”
It’s come a long way since a shopping mall had to be built—before Kwiatkowski and Pereira were born—to persuade people to buy homes in the area. But, as Pereira is quick to point out, it shouldn’t come as a surprise.
Follow Charlie Smith on Twitter at @csmithstraight.
Posted by Brentwood Station at 9:28 PM