We've already known for a while that Whole Foods will be an anchor store in the Solo District project. Now it has been learned that Shoppers Drug Mart will be part of the Altus Phase 2 of the project.  The addition of Shoppers Drug Mart will also be accompanied by a Signature LCB Liquor Store in the retail space in Phase 2.  The current Liquor Store at Brentwood Mall will close with the arrival of the new store in Solo.

The details of regarding Shoppers and the LCB Store are in the following City of Burnaby link: 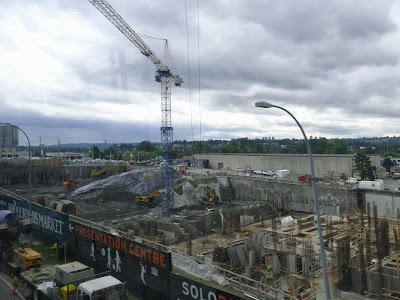 A new "signature" liquor store is being proposed for the SOLO District project under construction at the southwest corner of Willingdon Avenue and Lougheed Highway.
Signature Liquor Distribution Branch (LDB) stores are the largest of the provincial government-owned and operated liquor outlets which offer the largest range of products and special events such as product tastings.
The proposal is to open up such a store in the 48-storey residential-commercial tower now being built as the second phase of Appia Development's SOLO project. It's expected to be completed in 2015.
If approved, the store would be located on the second level over two levels of parking and retail space, and underneath 11 storeys of offices and 33 storeys of condominium apartments, according to a city staff report.
The proposal would fall in line with a liquor store location framework, adopted by city council in 2006, which called for the establishment of a government signature liquor store in each of Burnaby's four town centres.
"The purpose of this objective is to offer equity and certainty for consumers throughout the City in terms of product availability, convenience, and stable pricing," the report said.
A smaller LDB store currently in Brentwood mall is expected to be replaced by the proposed signature store, said the report.
The store would be located on Skyline Drive, a new street that would be built through the development site parallel to Lougheed.
And while signature stores are generally open later than smaller liquor stores, such hours would be consistent with at least two other major commercial tenants confirmed for the project, Whole Foods Market and Shoppers Drug Mart, the report noted.
Burnaby's planning department will work with the applicant to create a development plan suitable to be presented at a public hearing in the future.
wchow@burnabynewsleader.com
twitter.com/WandaChow
Posted by Brentwood Station at 3:09 PM