There is a big IF regarding the title of this post.  I had to get that out of the way to ensure readers that this is pure speculation and dreaming.  I've mentioned the name Uniqlo in a previous post regarding what the streetscape might look like in the new Fashion/Entertainment District after the Brentwood Mall Redevelopment.  Uniqlo, a Japan-based clothing retailer appears to be attempting an entry into the Vancouver retail scene and has been trying to work out a leasing arrangement for space within the Hudson's Bay in downtown Vancouver. 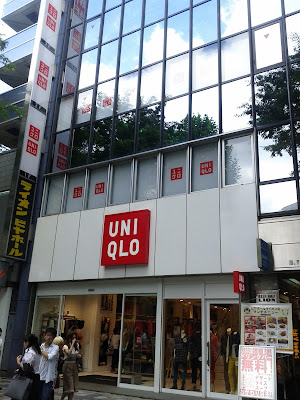 According to the following articles, arriving at an agreement has proven to be difficult.  As the title of this post suggests, Shape Properties should be courting a company with the profile of Uniqlo to bring a store that would be unique in Metro Vancouver.  Although stores that already exist in other parts of Metro Vancouver would be good for Brentwood, a Uniqlo type of unique retailer would only make the place more prestigious as a retail destination.

Vancouverites may rejoice everywhere for the rumours of Uniqlo moving to Vancouver are becoming more real each day.  According to Retail Insider, the Japanese retail company has been negotiating the lease for part of downtown’s Hudson’s Bay building.  The store would be set in the basement space of the building; directly below Topshop.
Uniqlo has five more American locations on its way and hope to open 20-30 American stores a year.  Vancouver’s location will be the first Canadian spot, with Toronto not far behind.  The store is said to launch in Vancouver in early 2013.
Uniqlo is an inexpensive retail company that began in Japan in 1949 and has stretched across the globe within the past decade.  There are nearly a thousand stores open world-wide including stores in France, London, Thailand and one in the Philippines which opened this past June.
The company hopes to be the world’s top apparel store by 2020 and so far they aren’t too far off the map.  “Thank god they’re coming [to Vancouver], I’ve been bugging them for a year on [Facebook],” said a Uniqlo customer on the Georgia Straight website. “They might not always have the cheapest or best designs, but they are real good qualities, fit like gloves, and look much better than the Gap and Hollister combined.”  Uniqlo has received praise all over the world for their clothes.
The store offers casual and fun outfits from dates to work and days on the couch. Retail Insider describes it as “cheap and chic,” clothes.
So far Vancouver’s location has not yet been confirmed, but hopefully they won’t keep us waiting for long.
Posted by Brentwood Station at 10:21 PM