Having woken up to a snowy morning, I decided to go to TransLink's website to see if the SkyTrain was running on time.  Although the snow began to stick to the ground in many parts of Metro Vancouver by 8pm last night, TransLink's website page that displays updates on its service delivery times was not at all helpful by 5:55am this morning.  This is what TransLink had on its page:


To further the frustration for transit users, the TV that displays advertising and news tickers along with the message boards that contain month-old "updates" at Brentwood Station had no useful announcements regarding transit issues this morning.  To give TransLink some credit, it had an inaudible announcement over its PA system trying to tell waiting transit users something about a delay caused by the snow... 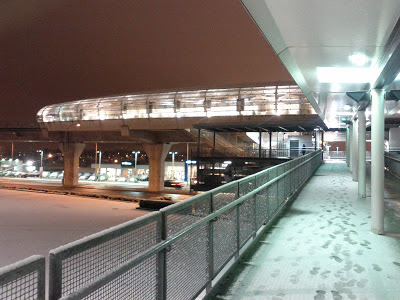 Posted by Brentwood Station at 6:43 PM