Is the Brentlawn bus route needed?

With the Delta Ave watermain replacement having been under way for over 2 months, Bus 134 Brentwood/Lake City Station has been rerouted around the Brentwood neighbourhood.  This having been going on as long as it has, the question arises about whether or not this route along Brentlawn Drive is needed.  Brentlawn Drive is lined with single family homes on the northern edge of a pending major redevelopment of Brentwood Mall that has also been subject to the whim of careless speedsters using it as their private highway at the expense of local residents.  The argument thrown around to quell the idea of traffic calming measures such as speed humps has been that Brentlawn Drive is part of a bus route.  Since this bus does not appear to be missed by very many living on Brentlawn (myself included) let's have Bus 134 permanently rerouted and traffic calming measures implemented to discourage the reckless speeding that will certainly return here after the work on Delta Ave is completed.

What do people out there think?  Is there anyone that uses that route by catching the 134 at a bus stop on Brentlawn Drive or Delta Ave?  Has anyone been extremely inconvenienced by the temporary change in the bus route? 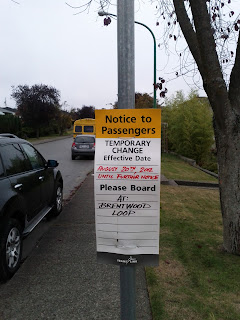 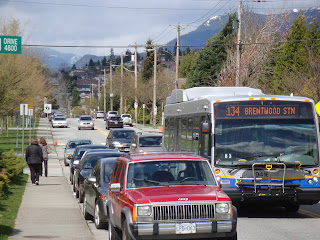 Posted by Brentwood Station at 6:58 AM