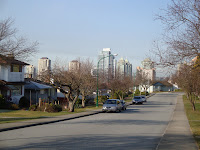 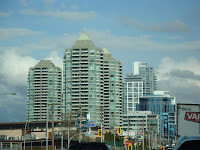 Rather than being an issue of trying to protect the historical feel of the neighbourhood, as is one of the issues with Chinatown, it will be an issue of what kind of historical feel can be created as Brentwood develops into the town centre envisioned by the City of Burnaby's development plan.  What kind of town centre do the people that live in and around Brentwood in North Burnaby want to see?  What kinds of amenities are needed as the population of the area increases?  Will the community centres at Confederation and Willingdon Heights parks be sufficient to meet the recreational needs of this growing area?  What about the environmental impact of development on the Still Creek system to the immediate south of the area?  These and other issues will be considered and discussed over the next decade as Brentwood's character and identity are formed.
Posted by Brentwood Station at 5:14 PM