Shape Properties will be holding a public session for the BMR next Wednesday June 26 at the Brentwood Mall food court from 4-7pm.


Brentwood Bus Loop to be removed

As stated by Shape Properties during earlier public sessions, the Brentwood Mall bus loop will disappear as the BMR unfolds.  The buses will remain as they will be dispersed along Lougheed and Willindgon along the mall perimeter.

Solo District's 2nd tower to be constructed, Altus, will become the second tallest tower in BC.   Mayor Derek Corrigan, MP Kennedy Stewart, and MLA Richard Lee were in attendance to see the groundbreaking to begin the construction of Altus.  The construction of the first tower, Stratus, is currently underway.

Solo District from SkyTrain on June 19. 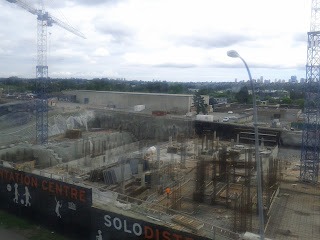 More on the stories in the articles below

BY STEFANIA SECCIA, BURNABY NOW JUNE 19, 2013
The tallest tower east of Burrard Street had a groundbreaking ceremony with special guests this past weekend in Burnaby.
On June 15, Altus - the second phase of the future SOLO District development - broke ground with Burnaby-Douglas MP Kennedy Stewart, Burnaby North MLA Richard Lee and Burnaby Mayor Derek Corrigan in attendance.
The Appia Developments project will see the Altus tower stand at 550 feet. It is only a few floors short of being as tall as Vancouver's luxurious Shangri-La tower. It will also include the city's first Whole Foods grocery store.
"We're very proud to be building the tallest tower in Burnaby," said Jim Bosa, Appia Developments president, in a media release. "The development of Altus is proof that Burnaby is growing into a livable urban community that is not only a great place to live, but an excellent place to do business, as well."
Construction already began on Stratus, which is phase one of the project, on the corner of Willingdon Avenue and Lougheed Highway in North Burnaby.
As part of Burnaby's density program, the city will receive $32 million in community amenities - including a 4,000-squarefoot community space - and $30 million in cash for off-site amenities.
"These lessons of sustainable community development will serve as a blueprint to fundamentally recreate Brentwood Town Centre into a model green community that will be another legacy for future generations," Corrigan said in the release.
SOLO District will bring 1,400 residential units and about 3,000 people to the Brentwood area.
"Aside from the height of the building, we're very excited about the roof-top entertainment space that will be offered to residents of Altus," said George Wong, Magnum Projects Ltd. principal, in a media release. "The top floor will be home to Club 55, a luxurious indoor-outdoor clubhouse offering residents more than 5,000 square feet of recreational space. Simply put, Altus will have the best views in the Lower Mainland."
The project is also incorporating a green feel with geothermal heat exchange systems, individual gas meters in each condo, a car sharing agreement, electric car charging stations and transit passes for some residents.
Altus sales begin on June 22. For more information, visit www.solo district.com.
Appia has also launched a social media contest, with four $100 gift cards to Brown's Social House and Joey Restaurants as prizes. To enter, visit the sales centre at 2131 Willingdon Ave. and snap a photo of the Google map pin, which is hidden in the sales centre.
Then tweet the photo or post it on Instagram with the hashtag #SOLOPin.
The contest closes on July 31.
Social media conference
A group of Simon Fraser University students are teaching local businesses how to interact via social media.
Co-founders Lesley Yuen and Saline Siu are looking to empower local businesses with the launch of the OMG Social Media Conference on Aug. 15.
"There's a gap and small businesses are suffering," Yuen said in a media release. "They want to sell to millenials, but they don't know how to reach them. For a crowd struggling to get any online engagements, walking them through the process of creating a social media marketing strategy is more useful."
HootSuite, SFU Beedie School of Business and Telus are sponsoring the event, which will feature three speaker sessions, three keynote presentations and 10 social media experts.
"As the online media generation, we are extremely familiar with social media - a luxury that we often take for granted," Siu said. "But it is crucial in the success of small business owners and we want to help bridge the gap between these generations."
The conference is Thursday, Aug. 15 from 8: 30 a.m. to 6: 30 p.m. at SFU Segal, 500 Granville St. in Vancouver. For more information, visit www.omgsocialmedia. org.
Plans for Brentwood mall
What will the future of Brentwood Town Centre look like? A Shape Properties public info session at the mall aims to answer that.
On June 26, Shape will host a public information meeting to showcase what the first phase of the redevelopment encompasses.
Shape acquired Brentwood mall in 2010, and has been working on redevelopment and rezoning plans ever since.
"The first phase of development envisions the creation of a new dynamic outdoor commercial centre, public plaza, and residential development, integrated with the Brentwood SkyTrain Station and adjacent bus service," a Brentwood Town Centre online post states. "All parking is proposed to be underground within the first phase, with above ground public spaces being pedestrian oriented and fully accessible."
Shape is asking the public to provide comment on the proposed redevelopment at the open house in the food court at Brentwood mall from 4 to 7 p.m.
For more information or to send comments, email info@shapeproperties.com.
No more Safeway
Burnaby's four Safeways will be no more. The company was bought out by Sobeys and will join Thrifty Foods and IGA under the same owner.
Safeway was acquired for about $5.8 million last week, including all the grocery stores under the Safeway banner in Western Canada, 10 liquor stores and 12 manufacturing facilities, among others.
"This is a significant and historic event for Sobeys, which has been proudly serving Canadian food shoppers for 106 years," said Paul Sobey, president and CEO of Empire Company Ltd., in a media release.
The Safeway locations will now be under the Sobeys name. The company is a wholly owned subsidiary of Empire.
sseccia@burnabynow.com
© Copyright (c) Burnaby Now

BY STEFANIA SECCIA, BURNABY NOW JUNE 18, 2013
Brentwood Town Centre's bus loop on Willingdon Avenue will soon be removed to make way for the proposed redevelopment at the mall.
Shape Properties has worked with the city and TransLink to provide a "more urban, on-street bus exchange approach in the vicinity" of Brentwood mall and the SkyTrain station.
This system will replace the bus loop in order to facilitate advancement of the mall' future development.
"Although the existing bus loop is functional, it does not provide a strong, desirable, multi-modal linkage for pedestrians and cyclists to access local commercial uses or the SkyTrain station," the report states. "The passenger amenities are sparse, and the link to SkyTrain is weak. These issues are also being addressed through the master plan."
The affected bus routes will not change, but all stops and layovers will occur on the streets and as close to the station as possible.
Coun. Colleen Jordan called the changes "amazing," saying, "TransLink and staff did a pretty good job."
But not all of council was as impressed.
Coun. Sav Dhaliwal was not pleased with the terminus of bus #123's route as it stops too far from the station.
He said an alternative route or stop should be considered for Halifax Street.
Council approved the changes at its June 17 meeting. Dhaliwal was the only one to oppose the motion.
For details of the report, visit www.burnaby.ca.
© Copyright (c) Burnaby Now

By Wanda Chow - Burnaby NewsLeader
Published: June 19, 2013 3:00 PM
Updated: June 19, 2013 3:55 PM
TransLink is relocating its routes as it vacates the bus loop in anticipation of the massive redevelopment of Brentwood Town Centre mall site.
On Monday, Burnaby council approved having the bus service moved onto city roads, which is expected by sometime this fall.
The route changes were developed by TransLink in conjunction with city hall and Shape Properties, owner of the mall site, with the intention of better integrating bus stops with Brentwood SkyTrain station and the eventual development project, said a city staff report.
Under the new system for the five routes affected—Nos. 25, 123, 134, 136 and 130—all stops and layovers will take place on the street and as close to Brentwood station as possible.
Route No.25 will turn around using Lougheed Highway, Alpha Avenue and Dawson Street; No. 123 will turn around using a new road on the Brentwood mall site and Lougheed; No. 136 will continue as it does today, approaching from the east and leaving northward as No. 134; in reverse, 136 will make a loop using Lougheed, Rosser Avenue and Halifax Street before departing as 136. There will be no changes to No. 130.
The existing bus stop at the station on Lougheed eastbound will be expanded to allow for the addition of route No. 25 and a new on-street stop will be added on the south side of Halifax, just west of Willingdon Avenue.
The changes will result in most bus passengers able to walk shorter distances to the SkyTrain station by up to 100 metres.
Coun. Colleen Jordan was impressed at what was possible without using Brentwood mall as a turnaround area.
"They're trying to make some of the pick-up and drop-off areas closer to SkyTrain for some of the routes. If that was the task at hand I think staff and TransLink have done a pretty good job."
But Coun. Sav Dhaliwal believes more could have been done.
He noted that the stop for No. 123 remains where it is on Willingdon, too far from the station, and questioned why the new loop for No. 134 has the layover on Halifax, instead of closer to the station where people can wait. "There's no point in having it two blocks away."
Council approved the changes by an 8-1 vote with Dhaliwal opposed.
wchow@burnabynewsleader.com
twitter.com/WandaChow
Posted by Brentwood Station at 7:32 AM