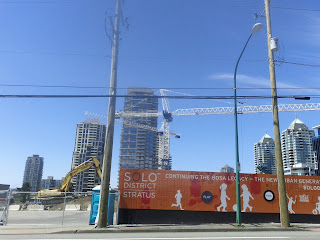 Sky is the limit for new Burnaby condo tower

Simon Druker June 15, 2013 3:22 pm
BURNABY (NEWS1130) – A new condo tower now under construction is set to become the highest ever in the City of Burnaby.
Ground was broken Saturday on the 49-floor, 550-foot tower on the southwest corner of Lougheed Highway and Willingdon.
Jim Bosa with Appia Developments, which is behind the project, believes people are moving away from the traditional house and yard as development moves up, not out.
“The idea that you need to look after your yard is becoming less favorable and it’s better to be able to just walk up and go,” says the Appia president.
“You’ve got a lot of people that are realizing that there is a convenience factor they get with towers. There’s a certain convenience factor with having your shops, your markets basically at your footsteps.”
Bosa says they encountered very little opposition to the project and that Burnaby City Council encouraged them to build it as high as possible.
“There was very little of anybody showing up in opposition with anything negative to say as far as views or shadows,” says Bosa.
Burnaby also supported the project.
“Burnaby has been very easy to deal with and more than accommodating. Actually they wanted us to go as high as we could.”
Construction on the tower, which will include commercial space on the ground floor and a 5,000-square-foot recreational clubhouse on the top floor for its residents, is scheduled to wrap up in 2016.


A massive new development proposed for Metrotown in Burnaby is going to test Lower Mainland demand for office and residential space.

Sears Canada has a large store on 3.6 hectares of land it owns adjacent to the separately owned Metropolis at Metrotown development. The company has taken the first steps toward rezoning of the property for five mixed-used residential towers and two office towers, along with a flagship department store.
Burnaby councillor Pietro Calendino agrees with estimates that put the value of the Sears redevelopment at around $1 billion, particularly with towers he guesses will likely be at least 30 storeys.
Calendino is keeping an open mind about the big new project because Sears Canada hasn’t come forward with a detailed conceptual plan. But he doesn’t think Metrotown is too crowded.
“Isn’t downtown [Vancouver] pretty crowded?” said Calendino. “This is a town centre. That’s where we want the concentration so we can conserve the single-family neighbourhoods.
“We have to put the density somewhere,” he said.
Density has been targeted for Metrotown because it is on busy artery Kingsway and has transit connectivity with its SkyTrain station and bus loop,
But Andrey Pavlov of Simon Fraser University’s business administration department wonders if there’s a demand for the density.
“There is space, clearly,” he said for more development at Metrotown. “What I worry about a little bit is the demand for those buildings.
“Sales [of real estate] are still way, way below long-term averages,” he said. “With that picture, I’m a little concerned that maybe we have too many condos already.”
Tsur Somerville of the Sauder School of Business at the University of B.C. also agreed that Metrotown was the right place for the proposed development.
As for demand, he thinks it will be three years or more before any actual units become available so market conditions may change.
But he can understand what Sears Canada is doing.
“Their most valuable asset is actually the real estate,” said Somerville. “There’s a lot to be said for extracting the value they have through redevelopment.”
Although Sears Canada did not respond to a request for an interview Thursday, the company’s vice-president of real Stephen Champion said in a letter to council that the project will be “planned and constructed in stages responding to market demand as well as the physical accommodation of structures on site.”
He said Sears is committed to working with Burnaby staff to design “an iconic mixed-use development appropriate for this important gateway location.”
But it’s not as if there’s a shortage of condos or offices in Burnaby or the Lower Mainland.
Also in the proposal stage is a major redevelopment of the Brentwood Town Centre that could include two towers up to 70 storeys — higher than Vancouver’s tallest building, the 62-storey Shangri-La Hotel on Georgia Street.
The Brentwood plan has a total of 11 towers on an 11.5-hectare site at Lougheed Highway.
Another big project being discussed is the redevelopment of Vancouver’s Oakridge Centre, home of the city’s first shopping mall. What’s being proposed is more mixed-use retail and commercial space, along with as many as 13 residential high-rises ranging in height from 18 to 45 storeys.
More density is also planned at Marine Drive and Cambie Street on the Canada Line and on Joyce Street near the Expo Line.
fluba@theprovince.com
twitter.com/frankluba
© Copyright (c) The Province

Posted by Brentwood Station at 7:35 PM