According to the following City of Burnaby report, a 3-way stop has been approved for the currently uncontrolled intersection at Goring St and Holdom Ave.  Of further interest is the fact that the report has mentioned the future Dawson Street extension from Beta Ave to Douglas Rd within the next 5 years.

RECOMMENDATION: 1. THAT the Committee recommend to Council the installation of all-way stop control at the intersection of Goring St at Holdom Ave as detailed in this report. REPORT BACKGROUND The City of Burnaby has received several requests to improve traffic operations and pedestrian safety at the 'T' -intersection of Goring Street and Holdom Avenue. The intersection is currently unsignalized wilh stop control for traffic arriving on Goring St while traffic on Holdom Ave has through priority. Motorists on the stop-controlled west leg experience extended delays at this intersection in the peak hours under the current configurations. Safety concerns have also been expressed by pedestrians due to the lack of crosswalks and suitable waiting areas. A traffic engineering review was completed based on the standard warrant analysis procedure from the Transportation Association of Canada (T AC) and the findings are summarized herein.

SITE LOCATION Figure I shows the location of the subject unsignalized 'T' -intersection of Goring St/Holdom Ave. The signalized intersection of Lougheed Hwy/Holdom Ave and the Holdom SkyTrain Station are located 160 metres to the north of this intersection. The surrounding area consists of high density residential developments, industrial land uses and mixed commercial and retail developments. 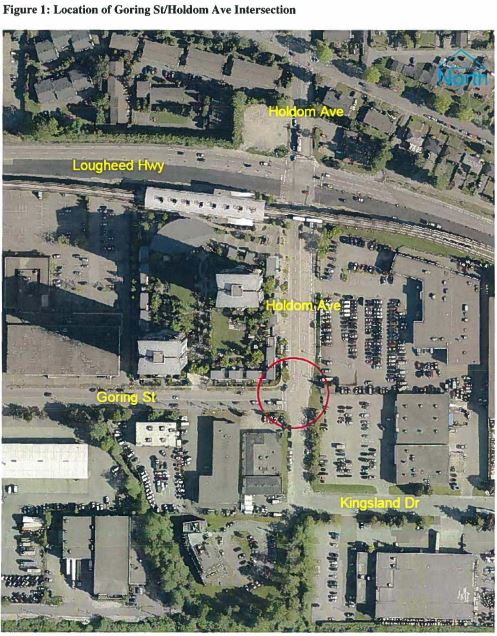 EXISTING TRAFFIC CONDITIONS AND FUTURE CHANGES Traffic counts have been conducted for the purpose of this review. The analysis takes into account current operating conditions. The Holdom Station Area Plan envisions significant residential development activity in the next few years leading to a traffic volume increase. In addition, the easterly extension of Dawson St from Beta Ave to Douglas Rd anticipated in the next five years will impact Goring SI. This intersection will eventually require a higher form of traffic control such as a roundabout or a traffic signal due to developments and network expansions.

WARRANT ANALYSIS The City follows the Transportation Association of Canada (T AC) intersection traffic control warrant analysis procedure. This takes into account traffic and pedestrian volumes, roadway geometrics, crash history and nearby traffic control and network connecti vity. This procedure ensures consistency, addresses the safety of pedestrians and meets driver expectations. Applying the recent traffic count data and existing conditions, a warrant analysis was undertaken to assess the adequacy of the existing one-way stop control and determine any necessary upgrades. Based on the analysis, all-way stop control is recommended for this intersection. In conjunction with this traffic control upgrade, crosswalks and a corner right turn channelization island are also recommended. The southbound and eastbound approaches will be designed to include two separate lanes clearly delineated with adequate queue storage. Figure 2 shows the recommended changes. 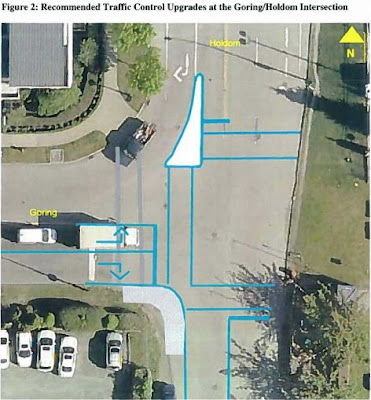 CONCLUSIONS The existing traffic control at the Goring StiHoldom Ave intersection is inadequate under the existing peak hour traffic volumes. Staff has now completed a traffic engineering review and allway stop control is warranted under current conditions. This upgrade will improve the level of service and reduce delays experienced by motorists. The proposed design will also enhance the safety of pedestrians at the intersection. The recommended upgrades are estimated to cost approximately $60,000 and funding is available within the 2017 Capital Budget for Minor Traffic Management Projects (EMF.0063). Funding contributions from ICBC's Road Improvement Program will also be sought to help offset some of the City's cost for this proposed road safety improvement.
Posted by Brentwood Station at 6:33 AM