Cineplex has officially announced the arrival of the Rec Room to the Entertainment Plaza of the Amazing Brentwood development and will also include a five-screen cinema.  The facility will be a one stop entertainment destination that will include a sports bar, game arcade, and a variety of food amenities.  Now that Cineplex has been announced as a major tenant at Brentwood, more significant commercial announcements are sure to follow over the next few weeks and months.

The links below will lead to the full articles and accompanying photos.

Burnaby’s Brentwood Town Centre is currently undergoing a major transformation—a shopping district, food-and-drink establishments, luxury residential towers, and an entertainment hub are all in the works.


Cineplex announced today that it will be opening B.C.’s first location of the Rec Room at the Amazing Brentwood (4567 Lougheed Highway), with plans to open in 2019.


So what exactly is the Rec Room?


Self-proclaimed as Canada’s premier eats-and-entertainment destination, the 44,000-square-foot space will include various dining concepts, amusement games, virtual reality and race car simulators, ping pong and bowling, live music performances, and a sports bar, among others.
Three10 will be the social spot’s upscale casual restaurant, and its menu will feature Canadian-inspired cuisine and wood-fired pizza.
The Shed will be the Rec Room’s quick service eatery, and will serve items like poutines with toppings such as porchetta, smoked brisket, lobster, and wild mushroom. The Pumps—a custom donut bar—will be available to satisfy sweets-lovers.
Cineplex will also be opening its VIP Cinemas at the Amazing Brentwood, which will span approximately 20,700-square-feet.
The movie theatre will feature five auditoriums, 365 luxury recliners, and a fully-licensed lounge that will serve wines, spirits, and craft beers.
Similar to its other VIP Cinema experiences in the Lower Mainland, guests will be able to order menu items such as burgers, cheese plates, charcuterie boards, and flatbreads at the lounge or have it delivered to their movie seats.
“We are very excited to add our premier entertainment and dining concepts to this dynamic new centre,” said Pat Marshall, vice president communications and investor relations at Cineplex, in a press statement. “The combination of residential homes, shopping, dining and entertainment makes this the ideal destination for British Columbia’s first introduction to The Rec Room, and we know that everyone loves our VIP Cinemas given their tremendous popularity.”
We don’t know about you, but we definitely have plans to hit up this food and entertainment spot once it opens—the convenience of eats, drinks, games, and movies all under one roof sound very attractive.
Follow Tammy Kwan on Twitter @ch0c0tam and Instagram @ch0c0tam.

TORONTO, May 16, 2017 /CNW/ - (TSX: CGX) Cineplex announced today that it plans to open its first British Columbia location of The Rec Room at Shape Properties' The Amazing Brentwood.  Canada's newest hot-spot for 'Eats and Entertainment,' The Rec Room brings together incredible dining experiences with exciting live entertainment and amusement gaming experiences, all under one roof.
The Amazing Brentwood will also be the new home of a Cineplex VIP Cinemas which provides a movie experience exclusive to Cineplex that features a fully-licensed lounge and licensed auditoriums where guests can relax in luxury recliners and have their food and beverage orders delivered right to their seat.
"We are very excited to add our premier entertainment and dining concepts to this dynamic new centre," said Pat Marshall, Vice President Communications and Investor Relations at Cineplex.  "The combination of residential homes, shopping, dining and entertainment makes this the ideal destination for British Columbia's first introduction to The Rec Room, and we know that everyone loves our VIP Cinemas given their tremendous popularity."
"We are very pleased that Cineplex has chosen The Amazing Brentwood for both of its flagship concepts, including the first location of The Rec Room in BC," said Darren Kwiatkowski, Executive Vice President of Development and Design at Shape Properties.  "The Cineplex VIP Cinema will occupy the top floor of the signature building that floats dramatically above the Plaza, designed specifically for a premium movie experience. The Rec Room is one floor below, and together they will play an integral role in activating The Plaza and The Entertainment Precinct which is designed to be the vibrant public heart of The Amazing Brentwood and the overall Brentwood Town Centre."
The Amazing Brentwood is located at the corner of Lougheed Highway and Willingdon Avenue, and will be accessible by Skytrain.
VIP Cinemas:Cineplex VIP Cinemas at The Amazing Brentwood will feature five auditoriums, approximately 365 luxury recliners and will be located on the entertainment level, occupying approximately 20,700 square feet.  VIP Cinemas are a premium movie-going experience exclusive to Cineplex and feature a fully-licensed lounge to enjoy before or after the movie and specially-designed VIP auditoriums where guests can relax in luxury recliners.  VIP Cinema guests can order from an expanded food and beverage menu – which includes a wide selection of wines, spirits and premium craft beers. In addition to Cineplex's famous popcorn, VIP Cinema guests can also select from a menu that features fresh salads, burgers, artisanal cheese plates, charcuterie boards and flatbreads. And all of these items are available in the lounge or can be delivered right to their theatre seat!
The Rec Room:Leveraging Cineplex's expertise in entertainment, operations, amusement gaming, food service, content creation and digital media, The Rec Room at The Amazing Brentwood will include:
In addition to the first location of The Rec Room which is now open in South Edmonton, Cineplex has announced plans for locations in downtown Toronto at Roundhouse Park, and at CF Masonville Place in London and at Square One in Mississauga; also at West Edmonton Mall and at Destination: Deerfoot City in Calgary, AB.
Cineplex plans to open between 10 - 15 new locations of The Rec Room over the coming years, each ranging in size from 40,000-60,000 square feet and customized to the individual community.  The massive, often two-storey entertainment complexes will see approximately half of the space devoted to dining and live entertainment and the other half devoted to amusement games and feature attractions.
The Rec Room at The Amazing Brentwood will occupy approximately 44,000 square feet and construction is expected to begin later this year with plans to open in 2019.
About The Rec RoomThe Rec Room is Canada's premier 'Eats & Entertainment' destination that brings together incredible dining, amusement gaming, technology and live entertainment experiences all under one roof. Part of Cineplex, The Rec Room is a premier social destination and the ultimate gathering spot for corporate events, groups and parties. While each location is customized to the individual community, The Rec Room concept features multiple dining environments and a wide range of entertainment options including a large amusement games area featuring state-of-the-art simulation, feature attractions and redemption games as well as an auditorium-style space perfect for musical acts, bands and comedians. For more information, visit TheRecRoom.com or follow the action on social media through Facebook (TheRecRoomCA), Twitter (@TheRecRoomCA), Snapchat (@TheRecRoomCA) and Instagram (@TheRecRoomCA).
About CineplexA leading entertainment and media company, Cineplex (TSX: CGX) is a top-tier Canadian brand that operates in the Film Entertainment and Content, Amusement and Leisure, and Media sectors. As Canada's largest and most innovative film exhibitor, Cineplex welcomes 75 million guests annually through its circuit of 164 theatres across the country. Cineplex also operates successful businesses in digital commerce (CineplexStore.com), food service, alternative programming (Cineplex Events), cinema media (Cineplex Media), digital place-based media (Cineplex Digital Media) and amusement solutions (Player One Amusement Group).  It also operates a location based entertainment business through Canada's newest destination for 'Eats & Entertainment' (The Rec Room), and an online eSports platform for competitive and passionate gamers (WorldGaming.com).  Additionally, Cineplex is a joint venture partner in SCENE, Canada's largest entertainment loyalty program.
Proudly recognized as having one of the country's Most Admired Corporate Cultures, Cineplex employs over 13,000 people in its offices across Canada and the United States.  To learn more visit Cineplex.com or download the Cineplex App.
SOURCE Cineplex

photos below from the dailyhive.com 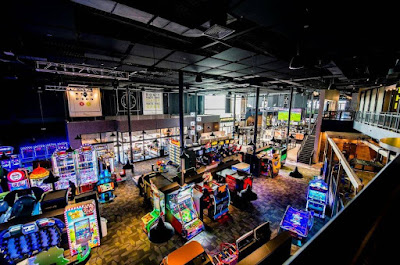 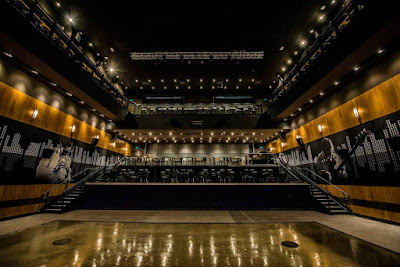 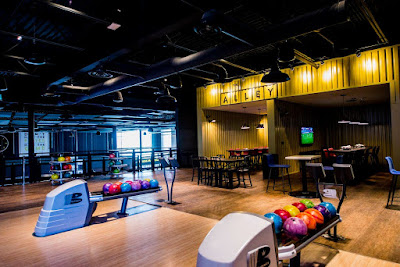 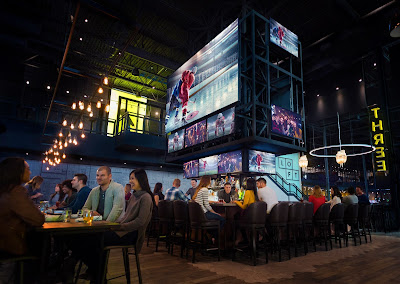 Posted by Brentwood Station at 10:49 PM