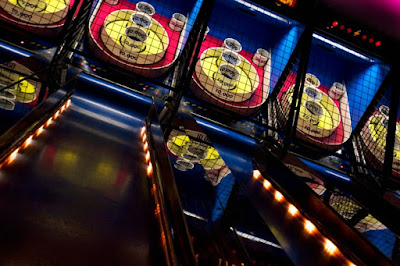 The Brentwood neighbourhood could one day be home to an entertainment venue that includes billiards, a bowling alley, ping pong tables, virtual reality experiences, food and drinks all under one roof.
Shape Properties, the developer of the Amazing Brentwood, is looking to bring The Rec Room to 4501 Lougheed Hwy.
It’s a Cineplex Entertainment concept that took off in Edmonton two years ago as part of a pilot project. The movie company plans to open another 10 to 15 locations across the country over the coming years, ranging in size from 30,000 to 60,000 square feet. The Rec Room in Burnaby would be around 44,300 square feet.
The complex will see half of the space devoted to dining and live entertainment and the other half devoted to amusement games and feature attractions.
“I think this is a pretty new concept here, and I think it’s good we get a lot of information and also find out how it’s working in Edmonton,” said Mayor Derek Corrigan at a council meeting last week.
The proposed hours of liquor service are 9 a.m. to 2 a.m., seven days a week, though The Rec Room would normally operate between 11 a.m. and 2 a.m., according to a staff report.
Whether there will be a Cineplex movie theatre is unknown, according to Lou Pelletier, the city’s director of planning and building.
“This particular proposal doesn’t start with the theatres; the theatres are on another level up, and might come from this company or another company in the future,” he said at the meeting.
The Rec Room would be located on the second floor of the west building in Phase 1 of the Brentwood Town Centre redevelopment.
© 2017 Burnaby Now
Posted by Brentwood Station at 8:04 PM