According to the following articles, open houses will be held beginning this month for the Dragonwood Development by Concord Pacific. 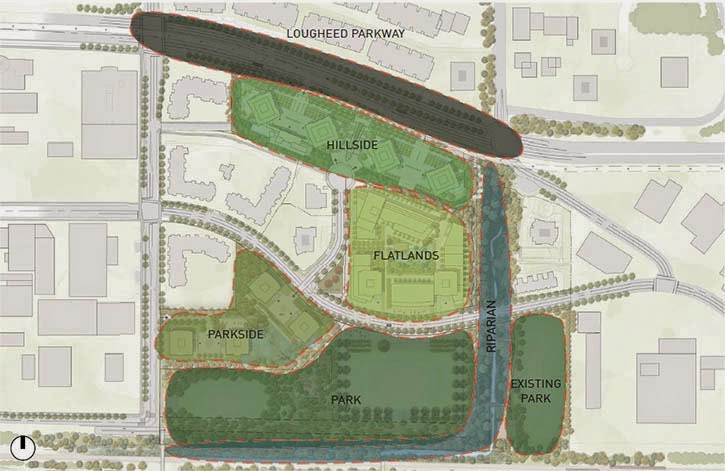 The city of Burnaby is hoping the redevelopment of the Woodlands industrial area will transform a sow's ear into a silk purse.
The 26-acre site, which is southeast of Brentwood Mall, across Lougheed Highway and bounded by Dawson Street, Beta Avenue and the BNSF/CN rail line, is currently comprised of 10 larger industrial warehouse buildings, several smaller facilities and "predominantly paved with asphalt and gravel."
But in a report presented to council on Monday the redevelopment of the area "presents a unique opportunity to create a truly special place, one that engages with the natural environment, is inclusive and diverse, and is fully integrated within the broader (Brentwood) Town Centre."
It would accomplish that with a mix of housing, commercial space, gardens and parks.
The site, as envisioned by James KM Cheng Architecture Inc., would parcel the area into six distinct zones.
The Lougheed Parkway corridor along the highway would be landscaped with trees, ornamental shrubs and ambient lighting along with a rain garden to soften the transition to the residential development in the parcel dubbed "The Hillside."
There up to four high-rise apartment buildings ranging in height from 35-55 storeys would be built on columns to preserve view corridors down to parkland at the south end of the site. A grand staircase would lead down the escarpment from a prominent outlook into the heart of the Woodlands development.
South of the Hillside, the Flatlands would feature a mixed range of housing as well as commercial spaces for residents including restaurants, cafés and retail. Most of the buildings would be mid-sized terraced structures between four and 15 storeys with the potential for two high-rise towers of 30-40 storeys along Dawson Street.
Four more towers of 25-45 storeys could be built in the Parkside area immediately to the southwest. The area around the buildings would be extensively landscaped to create a "private realm" that would be "park like in nature," said the report.
It would also be a transition to the new 4.1 hectare park that anchors the site.  That park would be adjacent to 1.29 acres of parkland the city already owns.
The new park could include sports fields, picnic areas, playgrounds, water features, a fitness circuit, a terraced amphitheatre and areas for environmental education. The east end of the park could eventually be home to a new elementary school.
Finally, the area around Stickleback Creek would be brought back to its natural state with stream side protection, low impact trails and pathways and restored habitat for fish and wildlife.
The result, said the report, would be to create a transit-oriented community, with exceptional urban design and architecture.
But before it can go any further, the proposal will have to scrutinized at a series of public open houses to be held over the next two months. Residents and property owners in the area will also be notified with an informational brochure.
Input from the open houses will then be integrated into the site's conceptual master plan that also includes design guidelines, a conceptual plan for the park, a plan for enchancing the riparian area around Stickleback Creek, a traffic study and a program for amenity bonusing. 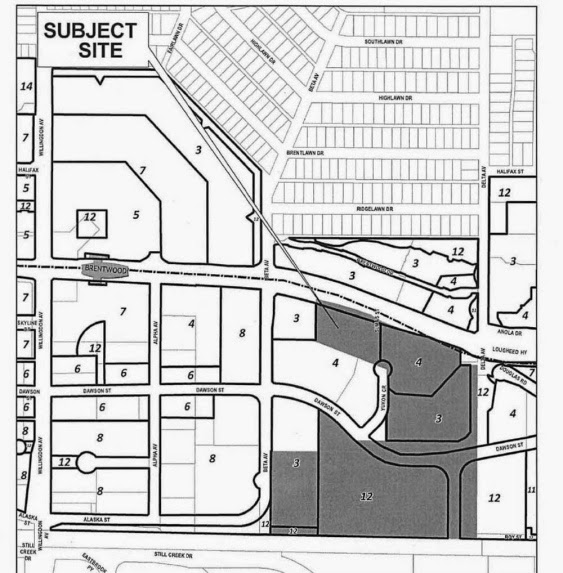 The city has big plans for the Woodlands neighbourhood, shown here as part of the Brentwood community plan.   Photograph By Contributed/BURNABY NOW

Peppered with industrial businesses, Woodlands doesn't look like Burnaby's next up-and-coming neighbourhood.
But Concord Pacific and the City of Burnaby have an ambitious plan for the 26-acre area, which lies south of Lougheed Highway, east of Beta Avenue, west of Delta Avenue, and extends south toward the rail line.
Burnaby's planning and building director Lou Pelletier detailed the site concept in a report presented to council at Monday night's meeting.
"The hard work that's been done by staff with the developer and the committee in order to make this what I think is a very innovative plan, and one that reflects the best use of the Brentwood Town Centre, is, I think, extremely important," Mayor Derek Corrigan said at the meeting. "This is a site that has, I think, provided all of us with a few headaches over the years, but it seems we've come to a pretty good resolution, and hopefully the community will agree as they go for their consultation."
The plan  is divided into six areas: the Lougheed parkway at the north end of the site would include a centre median landscaped with trees, shrubs and ambient lighting, according to the report.
The hillside area would include up to four high-rises ranging from 35 to 55 storeys with the option of townhouses on the southern slope. The plan also includes a grand staircase leading south from Lougheed Highway to Yukon Crescent. The hillside would overlook park space to the south.
The flatlands area would include a broad range of housing options such as mid-rise buildings four to 15 storeys high in a terraced formation, as well as the option for two high-rise buildings ranging from 30 to 40 storeys.
The parkside area would run along portions of Dawson Street and Beta Avenue and would include up to four high-rise buildings, ranging from 25 to 45 storeys.
The park itself would be 13.32 acres. Some suggestions for the park area include field space, water features, a children's play area, terraced seating, and there is space that could be set aside for a new elementary school for the area.
And finally, the riparian area would be an extension of the park surrounding Stickleback Creek, and could include low impact trails and pathways, as well as streamside protection to improve fish passage and wildlife habitat.
Burnaby council has approved a motion to present the plan to the public.
"It has some pretty innovative ideas that I don't think have been tried anywhere else in the world," Coun. Dan Johnston said of the report.
James KM Cheng Architecture was hired by Concord Pacific to develop the plan.
The site includes four privately owned properties at 4756 and 4828 Lougheed Hwy and 2311 and 2316 Delta Ave.; and six city-owned properties at 4874 Lougheed Hwy, and 4818, 4828, 4829, 2235 and 2285 Dawson St.
The city is starting a public consultation process for the project, with open houses planned for March and April.
The open houses will be held midweek in the city hall foyer from 9 a.m. to 4 p.m. and at the Holdom Resource Centre from 5 p.m. to 8 p.m., according to the report, and residents in the area between Lougheed Highway and the rail line, and Willingdon and Holdom avenues, will be sent brochures with the details.
Once residents have been consulted, a conceptual master plan will be developed for the site, which will then be presented to the public.
© 2015 Burnaby Now

Posted by Brentwood Station at 10:01 AM