I've mentioned before that making the area more cycling-friendly would make the neighbourhood better.  The following post by Richard Campbell mentions that Burnaby is leading the way in planning for cycling infrastructure and how it will infold in and around the city's developing town centres.

(The article and accompanying photo are from Richard Campbell's website)


Burnaby Leads in Including Separated Bike Lanes in Street Plans

The City of Burnaby has had the foresight to include separate bike lanes in its street plans for Lougheed and Willingdon in Brentwood Town Centre. As new developments are completed, the separated bike lanes are built adjacent them. As shown, in the photo, the first section on has been completed on the south side of Lougheed a block or so west of Lougheed. 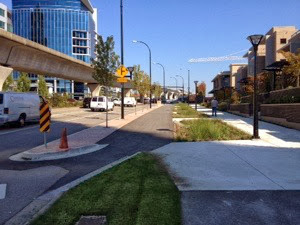 This is a cost-effective method to adding bike lanes that doesn’t impact other users that much if at all. The downside, of course, is that it can take decades to complete the bike lanes leaving gaps in the meantime.
In this respect, Burnaby is leading Vancouver which has yet to include separated bike lanes in the street plans for the majority of arterial streets although there proposals to include them on the streets adjacent to Oakridge Mall and along Great Northern Way as part of the Central Valley Greenway. Still, there are no plans to include separated bike lanes on obvious streets such as Main and Kingsway. Main has a high number of cycling crashes which should make it a priority for improvements. Kingsway, along with streets including Burrard south of 1st, Nelson and Smithe were identified as candidates for bike lanes way back in the 1997 Transportation Plan. Burrard south of 1st will be torn up in 2015 for waterworks. This would be an ideal opportunity to add separated bike lanes at a low cost while minimizing traffic disruption.

As the majority of shops and businesses as well as an increasing number of homes are on main streets, separated bike lanes along them are critical to enable people of all ages to safely, conveniently and comfortably use bicycles in their daily lives.
October 25, 2013 by Richard Campbell
Posted by Brentwood Station at 11:07 AM