While TransLink misappropriates $250, 000 to commission art work for the Metrotown SkyTrain Station (story below), the Commercial-Broadway Station upward escalator has been out of service since May 6 for "maintenance".  I don't know what TransLink's excuse is for having an escalator out of service for over 3 months (let alone for 3 days) and I can't help but wonder how this transit authority is able to justify, with a straight face, the spending of $250, 000 on art work when it is unable to maintain the operational integrity of its escalators.  Now don't get me wrong: I love artwork but TransLink should not be in the artwork business when it is unable to make competent decisions regarding transit services.

The question is this:  What is TransLink's excuse for such poor management? 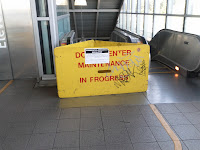 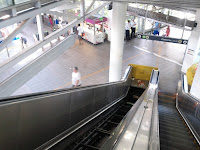 The following bit is from TransLink's site.

Effective Mon. Aug 12th from 9:00 am until Wed. Aug 14th at 3:00 pm
The 'down' escalator at the overhead walkway from Broadway station to the ticket vending machine level out of service

Effective Monday May 6 9am until further notice.
The up escalator from Commercial Street ticket vending machine level to the Broadway overhead walkway will be out of service due to scheduled maintenance.

Commercial Broadway Station Escalator Out of Service for Annual Inspection.

TransLink searches for artist to spruce up Metrotown SkyTrain station

Metrotown SkyTrain station is set to get prettier during its $35-million extreme makeover. TransLink sent out a call for artists to create public art for the station as part of the renovations at seven Expo Line stations, to be completed with federal cash by 2016.
“Public art contributes to a more vibrant, well-used environment,” TransLink spokesmanDerek Zabel said. “It can result in safer and more well cared for spaces.”
Graffiti tends to drop when there’s public art, Zabel added, noting that lots of cities use art as a strategy to improve safety.
But public art at SkyTrain stations has a history of attracting the vandalism it’s supposed to deter.Thieves stole one of 42 aluminum replica Volkswagen Beetles as part of artist Sudarshan Shetty’s “History of Loss” sculpture at King Edward Canada Line station in 2010. Ultimately, officials removed the installation from the station.


Regardless, TransLink will go ahead with the art strategy as it starts upgrades.


A panel of local art professionals, TransLink staff, Burnaby staff and an art consultant will choose the ultimate artist.


TransLink has $250,000 to pay for administration, paying the artist, fabrication and the installation – less than 1 per cent of the overall renovation budget.
Lower Mainland artists are asked to submit their resume and portfolio by May 14 at 2 p.m. For more information, visit Translink.ca.

Posted by Brentwood Station at 8:25 AM