My vote goes to the Green Party

This upcoming election, I will be voting for the Green Party.  Why would I vote for a party that everyone says has no chance of forming government after May14? Call me naive, but I still believe integrity counts for something.

The letter below to the Burnaby Now speaks for me perfectly.

People say that voting for the Green Party is like "throwing your vote away" because the Greens will not form a government after May 14.  My counter to such an opinion is that we've had a BC Liberal MLA named Richard Lee that has done nothing for Burnaby North during his 12 years in office.  I'M SERIOUS.  HE REALLY HAS NOT DONE ANYTHING FOR HIS CONSTITUENTS AS THE MLA FOR BURNABY NORTH.  As a result, anyone that has voted for Richard Lee has thrown away their vote.

Regardless of what you understand or believe, please get out and vote on May 14th.  Don't throw away your vote by not exercising your franchise, regardless of your political view. 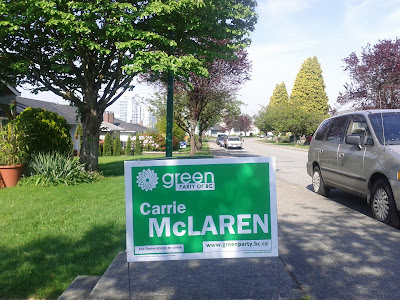 Love letter for the Green party

BY E. HARRISON, BURNABY NOW MAY 10, 2013
Dear Editor:
I have some ideas of what I would like to see happening in my community with respect to government. I love how one of the "green" parties - the "greenest" one I can think of - is running in the upcoming provincial election. Perhaps not at all sure they will win, but running with integrity, because they believe in change - massive change - they know is needed to reclaim democracy from the hands of corporate-owned governments.
Known as the Green Party of B.C., I appreciate their love of the environment, never wavering, always committed to preserving our natural beauty, considering we are each wise stewards of the earth. I love that they are aware that the earth sustains all life forms and that whatever we do to the earth, we do to ourselves.
I love that they know every human being deserves a say in the decisions that affect their lives and not be subject to the will of another. I love that they desire public participation at every level by directly including citizens in decision-making processes.
I love that they know that violence is self-defeating, war must end and crime must be rooted out at its cause. I love that they know punishing crime will not solve or end crime, as punishment does not heal a wrong.
I love that they know that instead of people being subservient to the economy, the economy, when run with love and integrity, naturally provides for human needs within the natural limits of the earth and that local self-reliance to the greatest practical extent is the best way to achieve this goal.
I love that they know that the ethics of cooperation and understanding easily replace the values of domination and control.
I love that they know that all humans celebrate the biological diversity of the earth and the cultural, sexual, and spiritual diversity of the human race.
I love that they realize power must be returned to local communities in order to be reasonably managed with integrity.
I love that they know global sustainability and international justice can only be achieved when responsibility is shared at all levels of society.
I may be called an idealist by some, nevertheless, my ideas of what I would like to see for our future are valid. More than that, some cultures have lived successfully for thousands of years aligned with the planet, until they were introduced to so-called modern-day "progress."
I'm interested in knowing what kind of a future would you like for your community?
E. Harrison, Burnaby
© Copyright (c) Burnaby Now