According to the Burnaby NewsLeader the public will get an opportunity to see a preview of the Solo District project this Saturday June 23 on Willingdon Ave just south of Lougheed (SOLO).  I will definitely try to make it out for the viewing.  For those that will need to drive to the site, a parking lot has been provided next to the presentation centre. 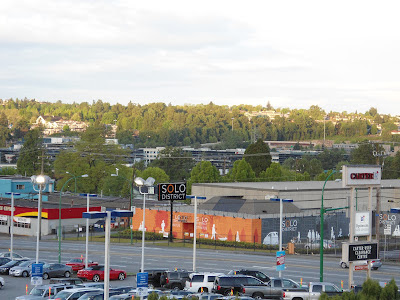 "I just saw the potential of what we could have down here," said Bosa, now president of Appia Developments.
Working from an office a couple blocks away, Bosa is set to make that potential a reality with the Solo District, a four-tower community on just over six acres, set to start construction in August once final approvals are granted by city hall.
"It's an opportunity that came up," said Bosa during a NewsLeader preview of the sales centre. "We've spent six years planning and designing for this."
The company contemplated getting the project off the ground three or four years ago, but decided to wait until market conditions were right. Then a couple years ago, Burnaby city hall introduced its "s category" of density bonuses and Appia redesigned the project to take advantage of it.
The result is a complex of four towers, with a total of just under 1,400 homes. It will include offices and commercial space, including the first Whole Foods supermarket in Burnaby.
The first phase, dubbed Stratus, will be a 45-storey, 374-unit highrise, the Whole Foods and additional retail space on the northwest corner of the site, at Lougheed and Rosser Avenue.
Phase two will be a 52-storey tower on the northeast corner, comprised of 250,000 square feet of office space, additional commercial space, and a residential tower on top of it all.
The third phase will be a 39-storey highrise on the southwest corner, with 12,000 square feet of commercial, and the fourth phase, to be built when market conditions permit, will be a 43-storey structure on the southeast corner, on top of a 20,000-square-foot podium of commercial space.
In exchange for the additional density, Bosa said Appia will be providing $32 million in community amenities if all four phases go ahead—a 4,000-square-foot community space to be owned by city hall, a $2-million value to be built in phase three, and $30 million in cash to be used for amenities off site.
The condos in Stratus will have their share of sustainable features, from Modo car co-op vehicles and two years of transit passes for a certain number of units to individual gas meters for each unit, so residents pay only for what they use.
All units will have air conditioning and a geo-exchange system will be used to reduce energy costs. "We're taking advantage of the energy the whole project produces (both retail and residential) rather than just blowing it out into the atmosphere," Bosa said.
As for Stratus, it features an outdoor rooftop common area that includes a fenced-in dog park, fitness centre, gardens and barbecue area.
The units range in size from the 475-square-foot junior one-bedrooms ($229,000) to three two-level skylofts at 1,785 square feet ($1.25 million), said Dennis Serraglio, Appia's director of sales. Two bedroom units will range in size from 850 to 940 square feet and start at $379,000.
They all come with balconies that are larger than usual but typical for Appia projects, said Serraglio. The junior one-bedroom (essentially a studio suite with a pony wall creating a sleeping area) comes with about 80 square feet of balcony, which is not included in the floor area.
"People in the summer like to spend a lot of time outside," he said. "It adds to the cost to build but it enhances the unit."
And when Solo is complete, it will all complement the planned redevelopment of Brentwood Mall across Lougheed.
"[Brentwood] will be more walkable and pedestrian friendly, more of a community versus a destination mall, in and out from the parking lot," said Bosa, stressing residents will be able to walk or take SkyTrain to their shopping and entertainment, leaving their cars, if any, at home.
While sales for Stratus will not start until mid summer, after the city grants final approvals, the sales centre at the end of Sumas Street near Willingdon opens for public previews this Saturday, 12 to 5 p.m.
A community event will be held at the centre on July 14, 11 a.m. to 3 p.m., featuring free food, games, and entertainment for the whole family.