Located on the northeast corner of Willingdon Avenue and Lougheed Hwy in North Burnaby, Brentwood Mall opened in 1961 with Eaton's, Loblaw's Supermarket, and Zellers as the main anchor stores with 60 smaller stores making up the rest.  It is the oldest shopping mall in Burnaby.

In June 1968, Prime Minister Pierre Trudeau made an appearance at Brentwood Mall where a crowd of 2500 was entertained by the Fort Langley Firemen's Band, a rock group named Tomorrow's Eyes, and folk singer Vera Johnson.

In the early 1970s the mall was renovated and expanded from the original open air strip mall to an enclosed-style mall.

The Zellers store closed down in the early 1980s and was replaced by smaller stores.

In 1988/89, the mall underwent a major renovation and expansion.  The expansion saw the building of a full 2nd level of stores along with a food court.  By this time the Loblaws Supermarket was long gone and had been replaced by a Super Valu.  The Super Valu store was demolished and replaced at this time by the returning 2-level Zellers store.  The entire project involved the addition of 200 000 square feet of space and took 10 months to complete.  It was during this renovation that the white sails making up part of the roof were installed. 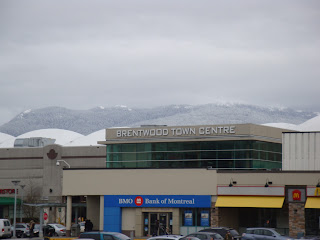 Before the expansion of 1988/89, the mall was the location for Circuit Circus Arcade, a place that I frequented for a few years in my youth to play arcade games such as Elevator Action, Double Dragon, and Blades of Steel.  Circuit Circus was located at the back of the mall near where the rear entrance to Zellers is currently located on the 2nd level.

The Eatons's store was purchased and replaced by Sears in 2000.  London Drugs opened the same year in an expansion of the mall on the 2nd level.

In August 31, 2002, the Millennium Line's Brentwood Town Centre SkyTrain Station opened.  The station and adjacent bus loop have established the area next to Brentwood Mall as a major transportation hub in North Burnaby.

In 2007, a renovation and extension of the food court was completed along with an update of the washrooms.   In 2008, the washrooms were awarded the Powder Room Seal of Approval as the best washrooms in British Columbia.

In early 2010, Brentwood Town Centre Mall was purchased by Vancouver-based Shape Properties.  The new owner has stated its plans to renovate and expand the existing mall along with a densification of the property with the addition of residential and commercial buildings on the surrounding parking lots.  Details of this project have yet to be released.

In early 2011, the Zellers chain was sold to US retailing giant, Target Corp by its parent company Sears.  Although an announcement on the future of the store  has not yet been made, the Brentwood Zellers will be replaced either by a Target store or by another retailer as Target intends to piece off certain locations if it doesn't itself occupy them.  Target plans to renovate the locations that it will occupy and will most likely collaborate with the mall owner as part of a larger expansion of the mall in the near future.