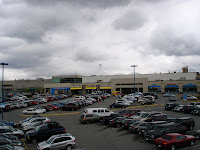 Early last month, the sale of Brentwood Mall to Shape Properties was announced. In a press release, the new owner has announced that it plans to "revitalize the existing Brentwood mall" and transform the 27-acre site into "a vibrant transit oriented mixed-use central core". On it's website, Shape Properties has listed Brentwood Town Centre as 1 of its 9 current projects with information and details to follow.

This exciting development has the potential to positively transform the unattractive parking lot around the mall into a nice mix of residential, office, and retail space including restaurants and cafes. Although the details of the project have yet to be announced, we can probably expect it to include the construction of multi-level parking to counter the parking space lost to the construction of buildings.

If I had a say in what should be part of the development, my wish list would include the following:

-cinemas (the only reason I ever go to Metrotown)
-Tim Horton's, Waves Coffee or both
-an ethnic food market such as H-Mart or T&T Supermarket
-community policing office to add an element of safety

Hopefully the development will attract some major corporate tenants that will create job growth in the neighbourhood.
Posted by Brentwood Station at 4:28 PM